The mission was simple: survive. As we climbed down the precipitous steps of Manchester Arena to take our seats for this year’s iteration of Disney on Ice, painful memories of 2017’s tediously over-long Peter Pan section and an apoplectic toddler began to haunt, and I double checked, just to comfort myself, that the emergency stash of Haribo was still in my handbag.

Actually, I needn’t have worried. This was a more imaginatively-staged and more engaging show than our previous encounter with the pirouetting princesses and rattled along at a pace that prevented parents getting bored and toddlers getting angry. The main improvement, or so it felt, was a substantial reduction in dialogue. Whereas last year we had too many long sections in which conversational extracts from Disney films blared through speakers while dancers idled around, this time the chat was kept to a minimum and a roster of A-list characters whizzed around to their biggest tracks and then made a sharp exit, usually twirling on one leg. 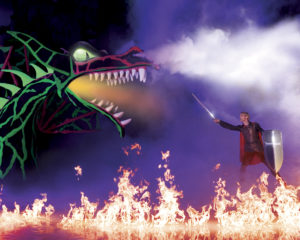 Encompassed within the strategically-vague theme of ‘Dream Big’ we had Aladdin and Jasmine, who provided perhaps the afternoon’s best skating to the saccharine A Whole New World, as well as Ariel, Belle, Cinderella and Sleeping Beauty’s Aurora. There was a European ice dancing debut for Moana, which meant a chance to hear some belters by Hamilton creator Lin-Manuel Miranda and a gasp-inducing scene involving flames licking around the ice, and, of course, a Frozen finale. But Arendelle’s finest did not dominate proceedings in quite the same way as last year. Perhaps the planet’s children are finally ready to Let It Go (sorry), but a more likely explanation is that the rest of this year’s show was sufficiently entertaining that the audience were less gasping for Elsa and Anna this time around. 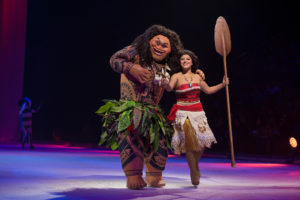 Nonetheless, they loved it still; some things never change. Just like the unforgivably-expensive merchandise, or the announcer’s exhortation to dance and be healthy while thousands of small children tucked into the industrially-sized vats of popcorn and luminous slushies in Olaf cups that they’d been flogged in the foyer. The more crassly commercial elements will, for me, prevent Disney on Ice from ever being a really magical family experience, and it will remain for some people the seventh circle of hell.

The whole shebang is toe-curling if you think too hard (or at all) about the gender roles it models or the relentless enticement to spend on tat that is destined for landfill. But taken on its own terms with a pinch of salt, and perhaps a balancing excursion to a low-carbon gender neutral fringe production next weekend, there is no denying that a lot of little people had a large amount of fun at Dream Big. The adults survived.

Disney on Ice: Dream Big is on tour. Visit the website for more information.

@VideOdysseyAhoy Good News: positive stories from across the North This week's inspiring acts include fundraising for local foodbanks, Sunday lunch from Harrogate fire station and a good dose of nostalgia and fun from Liverpool. northernsoul.me.uk/good-news-…

@supportthewalk Good News: positive stories from across the North This week's inspiring acts include fundraising for local foodbanks, Sunday lunch from Harrogate fire station and a good dose of nostalgia and fun from Liverpool. northernsoul.me.uk/good-news-…

@WEcic_ Good News: positive stories from across the North This week's inspiring acts include fundraising for local foodbanks, Sunday lunch from Harrogate fire station and a good dose of nostalgia and fun from Liverpool. northernsoul.me.uk/good-news-…

@Windermereboats Good News: positive stories from across the North This week's inspiring acts include fundraising for local foodbanks, Sunday lunch from Harrogate fire station and a good dose of nostalgia and fun from Liverpool. northernsoul.me.uk/good-news-…