In Northern England most of life passes in unspoken eloquence. Reposing in the superfluous, bubbling chip fat and bosom-shifting gossip camouflage is all that yearns to be said and never is. It doesn’t matter if it’s 1965 or 2015 – the embarrassment of seizing life and sifting through problematic clouds for any lining is hard labour. What would the neighbours make of your unwrapping and alphabetising life? You’re not supposed to live or die. You’re supposed to quietly cope.

In 1961 Bill Naughton unleashed his claustrophobic observation of community survival in Bolton, The Family Way. Originally titled Honeymoon Postponed when it debuted on television, it became All In Good Time in 1963 when it made the transition to the boards and then, finally, The Family Way in 1966 when The Boulting Brothers caught it on celluloid.

It’s a kitchen-sink classic with mordant wit trickling through. John Mills and Marjorie Rhodes oversee the impotence of being earnest that claws at newlyweds Hywel Bennett and Hayley Mills. Unable to consummate their marriage in a hamster-sized family house, paperback-hungry Arthur and starry-eyed Jenny are plunged into a silent sea of celibacy and awkward shrugs while the minds gallop away in frenzied thought. Sex. The Achilles Heel of the British. 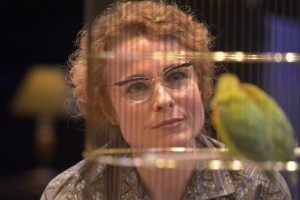 The original play has returned to Bolton’s Octagon Theatre and I had to elbow my way in. The film being part of my DNA I slouch into the Octagon wondering if I have the credentials to watch it without bias. Barely two minutes in I knew I did. Amanda Stooley’s glorious design is a lattice of digestive biscuit colours and instantly one is behind the net-curtains. The audience are in their best Turin Shroud drag and look like unknowing extras. It’s the charm of Bolton.

Jessica Baglow, slumbering in sexless patience as Violet, is superb. Harry Long as Arthur plays it brassy Hollyoaks at times rather than deathly dull 60s afternoon lull, but his charm at his best is what lingers. Barbara Drennan takes on the role of Lucy Fitton made famous by the beautiful war-mask face of Marjorie Rhodes. Whereas Rhodes could have stopped an army in their tracks with a stern turn, Drennan demands your eyes in a different way. She’s a whisper of Rhodes’s figure and plays Mrs Fitton with a thrifty gentleness that really works. The biggest presence is felt by David Birrell as Ezra Fitton. In a loud drinker’s tone he’s at home with the often missed, child-like comedy Ezra’s blindness to the world provides.

All in all, director Elizabeth Newman has grasped the grey lows of life in a production I highly recommend. 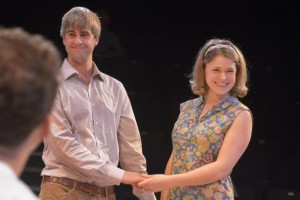 What: The Family Way

Where: The Octagon, Bolton