Jackie The Musical re-opens old wounds and places a plaster on your broken heart.

What becomes of the broken-hearted? They wallow. And wallowing is a great dramatic tool, used here in the nostalgia of old Jackie magazines (a woman – also called Jackie – having a mid-life crisis unearths the magazines during a clear out). Wallowing in the past is what we do best, just ask Mark Zuckerberg. I don’t think a week goes by without someone on Facebook posting a pic of themselves aged around 17 with a perm and blue mascara, over-rouged plump cheeks, grinning foolishly with all the hope in the world. And they’ll type: ‘Look at the state of that top.’ But really they are saying: ‘I was beautiful and new once.’

And people have these regrets; oh, I would tell my younger self a thing or two. But I forget about her resilience. She believed anything in life was possible and there were so many options. So why then, if I could have taken any road in life, do I and 1,000 other women groan with recognition at the mistakes this older Jackie makes? 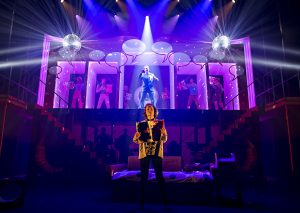 We all have the same feelings; where love is concerned we make the same mistakes. And regret is a spanner you need in your tool box if you’re going to make a musical about nostalgia. But something wonderful happens in this light-hearted and fun jukebox musical – the younger self can teach the older self a thing or two. Not the seasoned 50-something with the pearls of wisdom – BORING! No, it’s the hopeful 15-year-old who was right all along, because Jackie magazine gave her the answers.

I loved how the story focused on the quizzes that magazines had in those days. We all still do quizzes except back then we were told to run a mile from the wrong kind of boy. Now we are being told that we’re Animal from The Muppets, we should vote to leave Europe, and we need to phone for an ambulance immediately.

Women book theatre tickets. That’s a known thing. But it’s only in recent years that we have acknowledged this and developed women’s stories further. Of course we know that we don’t need a man or a woman to feel wonderful about ourselves, but now stories are actually addressing that feeling. Being in a theatre all together and singing Crazy Horses at the top of our voices elates us. Friendship elates us. Broken hearts unite us.

Jackie the Musical is at the Opera House in Manchester until May 21, 2016. For tour details click here.

So, what's on the menu? Well, we've got recipes for Black Sesame and Chocolate Banana Loaf, Golden Gingersnap Biscuits and Vegan Coconut Cupcakes.

The beginning of the week marked World Baking Day (May 17), but if you've still got the baking bug then @wingyipstore has some tasty recipes that will have you cracking out the mixing bowl faster than you can say 'banana bread'. #scran #recipe #baking tinyurl.com/4e42ybft pic.twitter.com/BXgtRy7d0V

@GaskellsHouse Review: Online tour of Elizabeth Gaskell’s House, Manchester Across the land, the doors are creaking open to the nation's much loved museums. Here's a sneak preview of what people can expect from Elizabeth Gaskell's House. northernsoul.me.uk/review-onl…

@MuseumsAssoc Review: Online tour of Elizabeth Gaskell’s House, Manchester Across the land, the doors are creaking open to the nation's much loved museums. Here's a sneak preview of what people can expect from Elizabeth Gaskell's House. northernsoul.me.uk/review-onl…