I remember being invited to the first JB Shorts a decade ago and having little idea what to expect from a notion that had begun as a conversation over a few drinks between two writers, let alone imagining that it would blossom into one of the highlights of Manchester’s theatrical landscape.

Trevor Suthers and John Chambers’ idea of a festival of short (no more than 15 minutes duration) plays written by established TV writers, staged over the course of a convivial evening, could easily have been one of those drunken chats that never go anywhere. Instead, Suthers and Chambers found a venue (well, a dark, dank cellar) at Joshua Brooks, brought on board writers Peter Kerry, James Quinn, Lindsay Williams, Dave Simpson and Diane Whitley, and enlisted the expert help of director Roger Haines, formerly of the Library Theatre, for the first JB Shorts in March 2009.

It proved an immediate success, not only with other writers, directors and actors, but also with the public and even critics. All involved realised that this was a chance to try out ideas and produce new and exciting work in a friendly and ever-so-slightly drink-fuelled environment. What was originally supposed to be a one-off event continued to grow year on year. Then, in November 2016, the whole kit and caboodle moved to the more appropriate surroundings of 53Two. 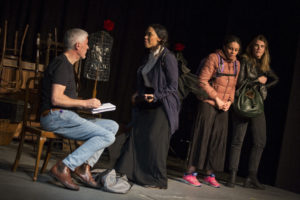 Now, JB Shorts Reloaded (aka JB Shorts 21) is a celebration of 20 much-loved shows. There’s a sense in which this is a ‘greatest hits’ collection and, like any compilation, not everyone will agree with all the choices. But there is a logic to including a piece from each of those initial writers, who all remain closely involved. The evening kicks off with the football-themed At The End Of The Day, written, directed and starring James Quinn (this time with his daughter Aileen). From the first JB Shorts, it’s extremely funny as it mocks the shenanigans around professional football, while universally excellent performances from Quinn, Callum Sim, Alexandra Maxwell, Philip Shaun McGuiness and Peter Slater make this a good choice as an opener. 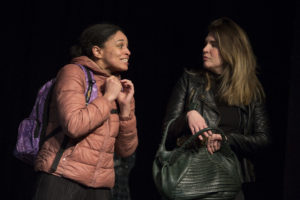 Peter Kerry’s Banal Encounter, directed by Chris Bridgman and starring Laura Littlewood as Lottie and Andrew Bentley as Wilf, was first seen at the second JB Shorts, and it’s a clever, dark and twisted variant on Brief Encounter. A poignant, memorable piece, its message about the banality of evil continues to strike a chord. Also, still timely but poignant for rather different reasons is Dave Simpson’s Blind Date, directed by Alice Bartlett, originally from March 2013’s JB Shorts 9. There were as many half-tearful ‘aahs’ as there were laughs as lovable Angela (Susan McArdle) and Andrew (Will Travis) tripped through the perilous world of online dating.

Following the interval, Diane Whitley’s Snapshots (from JB Shorts 5 in March 2011), directed by Rachel Brogan, pulled off a similar tricky blend of poignancy and chuckles as Sally (Julie Edwards) and Bill (Glenn Cunningham) celebrated a significant wedding anniversary, while grand-daughter Sally (Beth Nolan) and her fiancé Greg (Sean Ward) unwittingly exposed the secrets and lies behind that marriage. 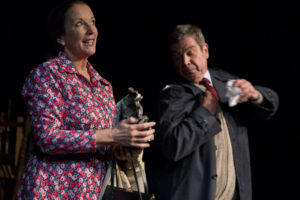 Lindsay Williams, who wrote the first play in the first show, is represented by one of my personal highlights, The Outing, first seen at JB Shorts 14. Directed by Miranda Parker, this is a perfectly-formed and heart-rending little mystery that boasts lovely performances from Richard Hawley, Kerry Willison-Parry and especially Jeni Howarth-Williams.

‘Leave ‘em laughing’ has always been a reliable theatrical adage and so proceedings are rounded off with a riotously audience-pleasing riff on acting and directing, Trevor Suthers’ Can We Stop It There? Directed by Brainne Edge and going back to JB Shorts 2, it boasts a host of familiar acting faces having a high old time demolishing a few pretensions of their craft, which feels strangely appropriate for such a fabulous celebration of all things theatrical in the North West.

JB Shorts Reloaded is on until March 30, 2019 at 53Two, Albion Street, Manchester. For more information, visit the website.