“Just wait and I’ll get the others, they’re all here,” says Lily Clark, forward for the Batley Bulldogs Girls Rugby League team as I chat to her outside the Lawrence Batley Theatre before the premiere of The Ruck.

As Clark gathered the team together for a photograph with me, I felt a sense of what really gels them – the love of a sport, camaraderie and a feeling of being a family. It was like being at a christening or wedding reception with all the girls decked out in their best clobber. But really we were here to see a play borne out of their Rugby League achievements.

The Ruck, though not true to life, is based on the Batley Bulldogs and harvests their team spirit. Writer Kevin Fegan has used his experience of trailing them during their ground-breaking tour of Australia to tell a tale of brave challenges both on and off the pitch. During the play, the characters of the fictional team muscle on. We watch young brave women battling their way through rucks and revelations, not sure of the outcome, but simply giving it a try. This is a story about teenagers, those who nurture them and the broadness of the term ‘family’. 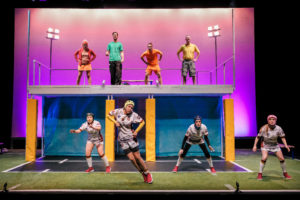 As promised during my interview with director Joyce Branagh, there is an eclectic mix of theatrical styles. The songs and poetic dialogue peppered within the show have a zig-zag of rhyming patterns, reflective of a forward player ploughing through.

In comparison to the strength of dialogue and characters, the narrative isn’t fierce, but a gentle stream carried through. There are many references for locals and rugby lovers  alike, which, though I am neither, I enjoyed as a voyeur, watching audience members acknowledge the inclusion.

The ensemble works perfectly and the sidling on of the minstrels (Robert Took and Sam Winterbottom) for the Greek Chorus ballads is typical of Branagh’s sense of fun.

Bringing this story to life has been a process of tender nurturing and, considering the stylised nature of the play and the fact that so many elements are brought together, nothing jars from scene-to-scene and the relationships between team members develop fluidly. The characters were superbly drawn, I believed them. Often when I see actors playing working class characters, they veer towards the snot-nose urchin, but Iffy (Sophie Mercer), Shelly (Esther-Grace Button), Emley (Josie Cerise), and Heaton (Emily Spowage) were played with integrity; good skills on the girls. 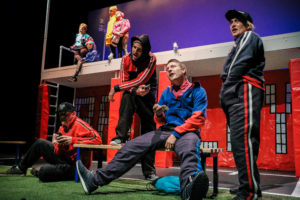 Emma Ashton plays Nan as a universal tough-nut matriarch fiercely protecting her vulnerable grandchild from the truth of why they are thrown together. Richard Hand is one step away from a soft-touch as the coach Spen; lovable and trying to be hard among a terrifying array of strong girls. Yes, that is the full cast acknowledged. This is a fine example, and rightly so given the subject matter, of excellent team work.

Above all else, what better way to spend a Friday night than watching a group of young women achieve a dream?

The all-female Yorkshire rowers who set a record for crossing the Atlantic had one important goal: to finish their journey as friends. I hope this was the outcome for the real Batley Bulldogs, and that the play goes on to experience the same notoriety and success. 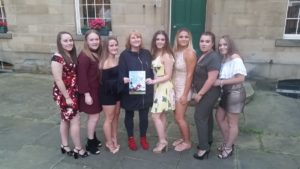 Following The Ruck’s world premiere at the Lawrence Batley Theatre on September 15, 2017, the production will tour to Cast in Doncaster and The Civic Barnsley. For more information or to book tickets, click here.