Director Joyce Branagh is working on what sounds like the perfect premise for an ensemble piece.

Due to open at Huddersfield’s Lawrence Batley Theatre this month, The Ruck is a fictional tale inspired by The Batley Bulldogs, an under 16s Girls Rugby League team, and its tour of Australia. As the first British girls team to carry out such a feat, it’s an impressive tale.

Award-winning playwright Kevin Fegan accompanied The Bulldogs to Oz and became a part of the tour experience. This would prove to be the first step in creating a fictional story inspired by these inspirational young women from a small town in Yorkshire. The original team were even present during the reading of an early draft.

“I only realised since I started working on the play how successful the real team have been,” Branagh tells me. “Batley girls have beaten everyone. That’s why they invited the Australians over in the first place, because they needed opposition.” 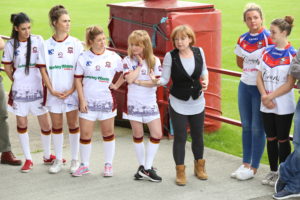 From what Branagh says, the team learnt a great deal from that experience, upped their game and the whole rugby family gathered funds in every which way possible to send the girls on tour down under.

“They all saved up – the team, their folks – which must have been a massive effort. They worked like bastards packing bags at Tesco. There was lots of charity fundraising, even making designer poo bags.” They sold a thousand of them. “They raised the money and they had a big adventure.”

She adds: “We did a press event and some of the original team were there and they were great. I said to them, ‘you’re really good in front of the camera’ to which they said, ‘yeah, we’ve done this a lot’.”

As an ensemble piece, Branagh is pleased with how well the cast are gelling. 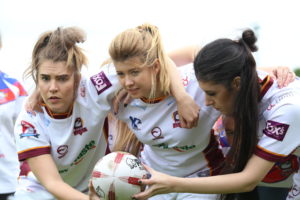 Now halfway through rehearsals, Branagh is revelling in the mix of themes and theatrical styles. “There are so many different facets and you get to a section of story and you want to give that a bit of room. Some of the play is naturalistic and some scenes are quite stylised, and there’s music and there’s dancing. Some bits are domestic drama and then there’s games of rugby.”

It sounds as though the many twists and turns of the story are enriched by whatever style suits the narrative. With musical elements as well as tense gritty drama, Branagh is keeping an eye on the balance.

“The challenge is to get all those elements right and they are working so well together. We have experienced actors who are working together really nicely, and Rebecca Hughes is doing some amazing harmonies with them.”

New writing is in safe hands with Branagh. She’s directed a huge amount of new work and knows that feeling you get working on an unknown piece, when you are the first to open that cave of delights and the first to display the treasures.

I ask Branagh for a hint about what to expect from the story.

We don’t know just how the story unfolds. I know there is a long-lost family member, and there are team tensions on the pitch, but there are also love interests taking place off the pitch that might rock the boat. Branagh sums it up: “It’s a drama but there’s lots of humour in it, it’s not a hard watch and you don’t have to be a girl or into rugby to enjoy it.”

Following The Ruck’s world premiere at the Lawrence Batley Theatre on September 15, 2017, the production will tour to Theatre Royal in Wakefield, Cast in Doncaster and The Civic Barnsley. For more information or to book tickets, click here.