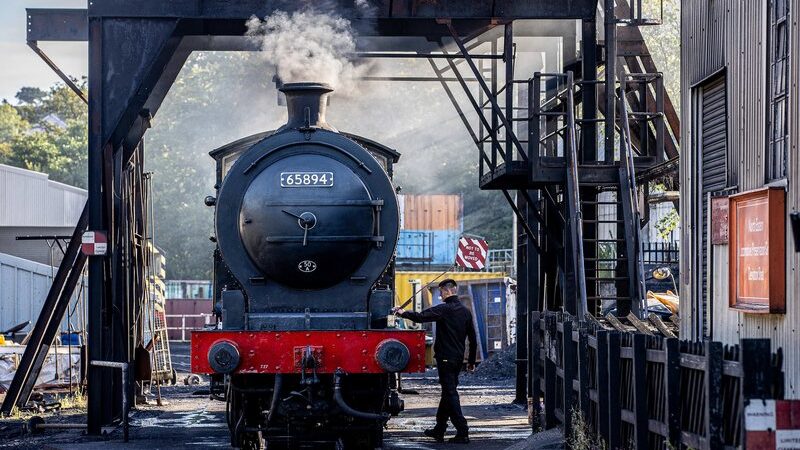 It’s August 1 – Yorkshire Day – and the North Yorkshire Moors Railway has re-opened following its COVID-19-induced hiatus. When I take the steam train from Grosmont to Goathland, steam aficionados are out in force, dotting the route armed with tripods, zoom-lens cameras, and iPhones. The biggest crowd builds on top of the grassy embankment by Goathland station, aka Hogsmeade in the first Harry Potter film and Aidensfield in 60s-set TV series Heartbeat.

The journey is an uncanny experience. Seated in a 50s-style train carriage, the thud of pistons building as the locomotive hits its stride, whistle tooting, wisps of steam disappearing over tree tops, and then sporadic clutches of people training the latest tech on you from the sidings and jolting you back into the 21st century.

Steam paparazzi and mandatory face masks aside, this journey through woods and over moorland is definitely not of our time. It’s hypnotic, underscored as it is by the soporific chug of the engine, and slow-paced. It makes for a meditative hour. Not a commute or a passage from A to B, just time whiled away and scenery savoured for a change. Book-ending the journey as you board and alight are the firemen on the footplate, shovelling coal into the firebox in blue overalls, and the platform crew sporting black waistcoats strung with silver pocket watch chains. This cements the otherworldly effect.

Journey done, I poke my head into Model Railways and Buses, a shop opposite Grosmont station which sells secondhand, die-cast…well, the clue’s in the name. Owner Dave Edge is a lifelong steam train enthusiast and author of books on the subject. “When I was a baby, and couldn’t sleep, my parents used to take me up to the station at Banbury to see the trains and I’d go right to sleep afterwards,” he tells me. “You either like steam trains, or you don’t. Ninety per cent of the people in Grosmont are railway-oriented.” 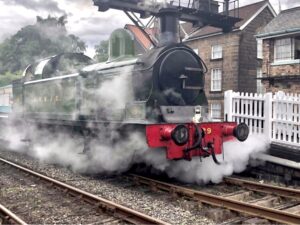 Meanwhile, former gym owner Ian McGrath grew up in Grosmont but has never been a steam obsessive. “When I was a kid, I did the carriage cleaning in the summer. I wasn’t a volunteer, I was getting paid.” Nonetheless, he has fallen down the rabbit hole and now co-owns Grosmont Bookshop, and has 7,000 secondhand books on railways that he’s getting to grips with. “They’re only allowed so many books on trains in the house. So, when they get new ones, they bring the old ones here.”

Finally, I fall into Grosmont Crossing Club – a real ale pub founded in 1999 by, for the most part, a committee of railway volunteers. The Crossing Club has undergone a revamp during lockdown. Station signs adorn the walls. There’s a piano in one corner.

“If you ask him nicely, Dibbsy [barman Tom Dibbs] might play you a tune,” I’m told by Andrew Jeffery, another barman. And a thousand-plus beer mats hang from the ceiling, mementoes of all the real ales served to date in the club. A blackboard by the bar has the exact tally: 1,289. Collages of photographs line the stairs. There’s one of the pub being constructed back in the day – train drivers, volunteers and non-railway people all mucking in.

Also a committee member, Jeffery wears a t-shirt with ‘They said it’ll only last three months’ emblazoned on the front with ’20 years later…’ printed on the back. I get the gen. The pub came about to plug a real ale gap in the town after The Station Tavern stopped serving it (for the record, real ale is back on tap at the buzzy Station Tavern these days and I can vouch personally for the Bombardier). 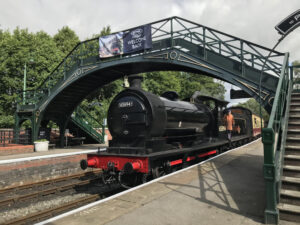 “They [The Station Tavern] stopped getting real ale on,” Jeffery remembers. “And a lot of members of the railway wanted somewhere to go and drink so a load of them got together. This was a store room for The Co-op, so they rented it off them to turn into a real ale bar in 1999. Loads of people said it wouldn’t last three months. It was a big separation in the village at the time. It was either Tav people or Club people at that point. Now we get on. Tav comes in here and drinks, and we go over there, and everyone’s happy.”

Grosmont Crossing Club opens at 4pm throughout August and then reverts to its usual 8pm-11pm opening hours.