There’s an old saying in China that ‘women hold up half the sky’. In other words, women make up 50 per cent of the world’s most populated nation. In celebration of this, the Centre for Chinese Contemporary Art (CFCCA) in Manchester has launched NOW, an exhibition of female artists from mainland China.

This is something that is gathering pace. Manchester’s HOME screened a programme of short artist films with a further showing in March. There are other exhibitions in Middlesbrough, Nottingham and Margate showcasing the range and depth of contemporary art currently being produced in China. It has certainly moved on from the dull propaganda portraits of Mao and now speaks the language of the international art world. And it is full of installations, films, site-specific works and collages that go beyond the purely aesthetic into the socio-political environment of social structures, virtual platforms, bodies and identities. The artists seek to question our place in the world rather than simply please our eye. 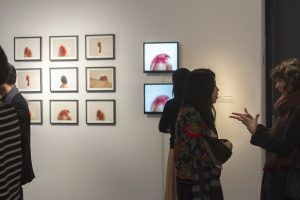 In a stunning site-specific sculpture, Na Buqi’s Floating Narratives is a collage of hanging lighting, artificial plants, printed images, portable fans and a fake lemon. Her aim is to create fictional and physical relationships in the minds of her viewers, to create alternative narratives between her chosen objects. It reminds me of Comte de Lautreamont’ s dictum about there being nothing so beautiful as ‘the chance meeting on a dissecting table of a sewing machine and an umbrella’ adopted by the Surrealists as their artistic modus operandi. Though, perhaps as a witty cul de sac for your hapless critic, she did inform me the ‘it’s all about the lemon’.

A wide range of mediums are on show at CFCCA including photographs, videos, animations and sculptures representing the diversity of approaches to art in contemporary China as you would expect, but the exhibition also displays an aesthetic bond between the artists – always the sign of a well curated group effort.

HOME’s Bren O’Callaghan visited China to select an interesting collection of moving images, which was shown recently before the exhibition launch at CFCCA, and provided more stimuli for the eye and brain. Peng Yun’s Miss Melissa and Mr Fish at 2:31 pm detailed the chance meeting of a trout and the arm of Miss Melissa on a bed of lilies. What ensued was the most sexual encounter between human and fish since Malcolm Brenner’s year-long affair with Dolly the dolphin in the 1970s. It had a strange erotic beauty that certainly held my attention, though my weekly visit to Out of the Blue fishmongers in Chorlton will never be the same. 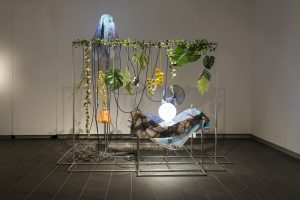 NOW is an ambitious, multi-venue project that affords the viewer a timely glimpse into the complex world of Chinese contemporary female voices in a media landscape so often dominated by superstars like Ai Weiwei.

It is a welcome contribution to the continuing debate over women’s roles in the wider world beyond art. We must never forget that they still, and will always, ‘hold up half the sky’.

NOW: A dialogue on female Chinese contemporary artists is showing at Manchester’s HOME on March 19, 2018. For more information, or to book tickets, click here. Art works are on display at the Chinese Centre for Contemporary Art until April 29, 2018.