Review: The Taming of the Shrew, Lancaster Castle

Stephen Longstaffe August 12, 2016 Arts, Theatre Comments Off on Review: The Taming of the Shrew, Lancaster Castle

Sometimes it seems as if every park, stately home, castle, National Trust property and botanic garden you pass in the car is hosting something Shakey. Even the Shakespeare’s Globe company has been spotted occasionally in Lancaster, Windermere and Penrith (though they seem to have pretty much given up on the North of late).

Then there is Lancaster Castle which has developed as a performance venue since it ceased to function as a prison in 2011. On the first Friday in August, its green courtyard played host to bicycle-based touring company The Handlebards and its performance of The Taming of the Shrew. The troupe arrived fresh-ish from a 26-mile cycle from Hoghton Tower, having previously played at Manchester Monastery and the Sustrans Fallowfield loopline. The next night the show would go on, and the company get very wet at The Brewery in Kendal.

So, what’s The Taming of the Shrew all about? In Shakespeare’s day, a ‘shrew’ was a woman who scolded a man. The Taming of the Shrew centres around the ‘taming’ of Katherina, who is blocking her younger sister’s marriage by refusing to countenance any of the suitors chosen by her father. Her ‘tamer’, Petruchio, manages to ‘tame’ her with the help of starvation, sleep deprivation and other unpleasant disorientation techniques. At the play’s end she wins him a bet by delivering a sermon on wifely obedience to two other so-called shrews. 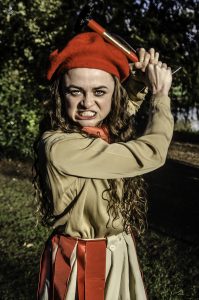 It’s not an easy play to take in the 21st century. And it may have ruffled a few feathers in its day. Shakespeare’s collaborator John Fletcher wrote a sequel called The Tamer Tamed in which Petruchio gets his comeuppance at the hands of his second wife. But, in the capable hands of the Handlebards, we never take it too seriously. In part this is because there are only four performers, often playing two characters at once. You might think it wouldn’t work, but it does; actors rush from side to side of the staging area to stand behind their character’s jacket (held up by another actor) in the manner of a seaside picture board, before rushing back to their other ‘self’. The actor joining in as the ‘new’ character is signalled by the ping of the bicycle bell each performer has on her finger. There’s something uniquely cheery about a performance of The Bard punctuated by bicycle bells ringing.

It’s not playing but playing with Shakespeare. They know we’re watching them, and occasionally raid the audience for extra performers (so the two shrews in the final scene were men dragged up from the audience, bedecked with hastily provided bosoms and wigs, which nicely distracted from Katherina’s problematic sermon).

For the most part, the characterisation owes more to Patsy Stone and Lord Flashheart than method mumbling. It’s all great fun. It’s inclusive, too – if a foreign word or phrase is used then the translation is magically revealed to be already written on a prop or costume.

The lines are sometimes rushed over, and you won’t find too much of a directorial interpretation of The Play. The set is what can be towed behind a bike. But who cares? There’s bags of energy, good humour, tight teamwork, on-the-spot improvisation (the castle clock chimes kept interrupting speeches), and a good deal of technical skill propelling Shakespeare along at a fine old lick. The cast was uniformly excellent, though I particularly enjoyed Lizzie Muncey’s inspired clowning.

I saw a high-concept Shakespeare’s Globe touring production of a Shakespeare comedy a few weeks ago. I’d take the Handlebards over that any day of the week.

What: The Taming of the Shrew

Where: Lancaster Castle and touring