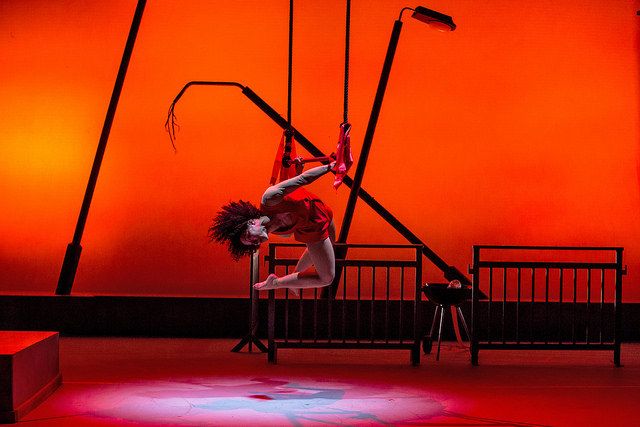 As I observed the seats filling up for The Jungle Book, I suddenly panicked that I’d come to the show without a kid. Yet Metta Theatre’s electric re-telling – combining street dance and circus routines to bring Rudyard Kipling’s tale into the 21st century – is not just for children.

Even before the curtain rolled up, I was transported into an urban jungle with the distant sound of cars humming, horns tooting and street lights casting a golden glow across the auditorium. This was the setting for our modern-day Mowgli who, separated from her business-woman mother, enters the urban jungle (yes, Mowgli is a girl).

This is a world where panther Bagheera is a graffiti artist, tiger Shere Khan a gangster rapper, and Mowgli’s wolf family a body-popping, skateboarding crew. Python Kaa lurks in the background, elegantly twisting herself around a street lamp, hypnotising everyone who crosses her path. 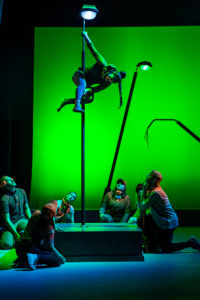 Baloo, the beat-loving bin bear, opens the show and introduces the characters in a lyrical prologue. Referencing Disney’s Bare Necessities, I couldn’t help but smile as some of the kids grinned up at their parents, nudging them in recognition.

While there isn’t much in the way of a script, gravity-defying back flips, splits and spins act as the dialogue, where Mowgli learns the dance languages of the street, as choreographed by the brilliant Kendra J Horsburgh.

Baloo, played by Stefano Addae, was certainly the star of the show for me – overreaching leaps and stomps, comical miming and a bluesy style echoing Disney’s bee-bopping, jazz-loving bear.

This is a great introduction to dance that shows off a range of styles and cultures from around the globe, touching on everything from ballet and lindy hop to street, hip-hop, body popping and aerial rings. Each animal character or tribe has their own movements, and this plays to a central theme within the play as we explore what it means to find your place within the many ethnic, social, class-based tribes that make up today’s multicultural Britain.

Rarely does an 80-minute performance manage to squeeze in so much, and I was pleasantly surprised to see several strong female leads dominate the stage (apparently, this is a running theme in many of Metta’s productions).

This adaption of The Jungle Book stays close to the original story while offering up new interpretations around friendship, finding your way in the world and the power of artistic expression. The latter is grounded in the closing scenes as Mowgli reflects “if you ain’t got a voice/you ain’t got a choice”.

If you’re looking for a last-minute summer excursion with the kids, look no further than this visual and energetic performance.

The Jungle Book is at The Lowry in Salford until September 2, 2017. For more information, click here. For info on the show’s touring dates, click here.