On the face of it, it’s difficult to see why PIPPIN The Musical is not better known on this side of the Pond given it boasts music and lyrics by Stephen Schwartz, whose stage hits include Godspell and Wicked as well as a latter-day stint as a composer on such Disney animations as Pocahontas. Further upping its credibility quotient, Bob Fosse directed the original Broadway production and also contributed to the libretto.

Still, that’s good news for producers Aria Entertainment, who’ve previously brought such left-field winners as Parade, Yank, and Hair to the wonderful Hope Mill Theatre in Manchester. Now this bold and often brilliant show delivers another blow to the London-fixated attitudes of so many other producers and metro-centric critics. 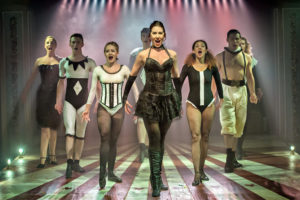 Perhaps it’s the basic premise of the show that has scared folk off. A mysterious performance troupe – here a splendidly imagined Victorian Vaudeville ensemble with a disturbingly dark soul and a penchant for preposterously revealing outfits – undertake to tell the story of Pippin, a young prince in search for meaning and significance in his life who also just happens to be a new young actor joining the company. It’s fair to say, then, that the show doesn’t so much break down the fourth wall as kick it into the audience and dance in its wreckage.

Although Pippin (Jonathan Carlton) is derived, like his father Charlemagne/Charles (Rhidian Marc), from real-life characters of the early Middle Ages, it’s also reasonable to observe that the plot doesn’t exactly hinge on its historical accuracy.

What it does boast instead, certainly in this terrific production, is outrageous energy, some decently memorable songs, plenty of fantastic performances from a multi-talented ensemble, including a performance from Genevieve Nicole as the threatening ‘Leading Player’ that shakes this old Victorian mill to its foundations, and even some magic tricks.

This is a production that’s delirious as it’s delicious and any theatregoer with an ounce of adventure in their soul will bitterly regret it should they miss it for any reason.

PIPPIN The Musical is at Hope Mill Theatre in Ancoats until September 23, 2017. For more information, click here.