I am infuriatingly punctual. I can’t bear tardiness which means I’m usually left standing outside in the cold, or at the bar, waiting for others to show up.

So when I arrive at The Horsfall (a new venue and creative programme dedicated to improving young people’s health and wellbeing) and see a note tacked to one of the windows directing those who’ve come to see Hidden, an immersive play, to the entrance of Ancoats General Shop, my heart sinks. For 15 minutes I wait, the wind causing my hair to stick out like Medusa, until a soft-spoken girl asks me if I’m there for the show and if I’d like to wait inside.

Ancoats General Store is more coffee shop than local Co-Op, and it a welcome relief from the bitter night. I chat to some of the other audience members, feeling all the while like I’m not entirely sure what’s going on. The awkwardness is like osmosis.

Despite these teething problems, I’m looking forward to the show. During my time with the creative producer Julie McCarthy a few days previously, I’d seen first-hand just how much hard work, dedication and skill had been channelled into proceedings. As we waited for the photographer to arrive, McCarthy had explained that Hidden would explore ideas about the future of care and the introduction of Artificial Intelligence. As a technophobe (I refused to get a smart phone until I was 25) it got my mind racing. Would it be a kindly, intelligent being like Robin Williams’ Bicentennial Man? Scarily realistic like in TV’s Humans? Or plunge us into a dystopian society straight out of I, Robot?

The premise of the play is immensely clever. The show is set on the day after tomorrow, in a world where empathetic care robots are available to all. The audience are cast as board members, reviewing the archive of a ten-year experiment to decide which robot would provide the best care. 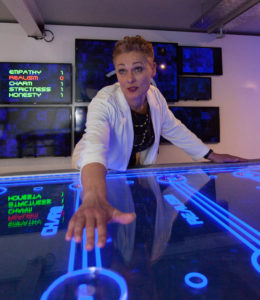 While audience participation usually strikes fear into the heart of this girl, the moment I step into the opening sequence – a living room – I feel at ease. The small audience numbers – a maximum of eight people – are permitted to stand wherever they please, engaging with props such as a notebook strewn on the arm of a chair.

We witness a touching scene between service user, John (Andrew McClay), and his robot carer, Beta (played by the extremely talented Ayleen Brouwers), as they bid farewell on completion of the experiment. Immediately, we are plunged into the story, asked questions and invited to become involved in the research.

“What do you think would happen if I tweaked her nose?” John asks and invites me to try it. I feel a bit weird pinching a young kid’s nose, but I do it anyway, and she immediately shuts down.

Next, we make our way through the corridor and up the stairs to visit Professor Johnson Thompson (Nicky Hargreaves) who opens the door to ‘the lab’ and hands us white coats. It is little touches like this which make the experience both inclusive and entertaining.

As we’re guided into the room, we’re taken over to a large control panel placed in front of a TV screen. The idea is to invite the audience to think about what would make the ideal robot carer by selecting behaviours we think are important. These are laid out in large buttons on the control panel, which we slide across and lock in. Each combination (empathy, honesty and strictness to name a few) is transposed into a scene, filmed and displayed on the screen. We’re then encouraged to deliberate and discuss the outcome and what a young carer may require from a support network. Hargreaves is outstanding as the professor, asking questions and directing us into exploring issues more deeply.

One of the great things about Hidden – besides the use of innovative technology such as liveSHOUT, an interactive listening app which broadcasts the play live at 7pm each night – is the creative process behind it. 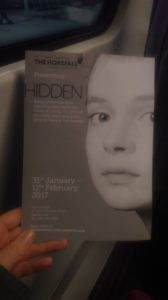 The project began as a response to research published by the University of Manchester which found that young carers, while welcoming support, also wished to be recognised and valued for the ways in which they respond to problems, and have developed expertise in managing illness and disability. The Horsfall approached the project from the viewpoint that they knew nothing about the situation and treated the young carers as experts. Too often, young people are not listened to seriously when support is introduced, despite their incredible wealth of knowledge.

Along with writer Tom Bowtell and interactive theatre director Annette Mees, the young carers worked together to create the script, design, sound and experience of Hidden. The result is a true testament to the resourcefulness, expertise and tenacity of these young people.

For me, the best part of the experience is engaging with a few of the young carers during the end scene. We take a seat in front of three youngsters, where it’s revealed that we’ve been watched the entire time. Here, we’re given a chance to not only ask questions and explain our reasoning behind picking the robot – and emotions – we did, but are also asked questions in return. We are even scored on our overall performance.

I left the theatre smiling, thoroughly impressed with not only the venue, the work of the team at 42nd Street and the actors, but the confidence and talent of each young person involved.

As adults, we too often believe our opinions are correct, but it’s imperative, and integral to the future of care, that we listen to our young carers. They know so much more than we give them credit for, and are sharp as tacks.

Hidden is at The Horsfall in Manchester’s Ancoats until February 11, 2017