Liverpool is to become home to the UK’s first revolving 360-degree Stage-Around Theatre as part of a multi-million pound programme to attract creative businesses to the Ten Streets district regeneration project.

At the launch earlier this month at the city’s Titanic Hotel, Kees Abraham of Stage Around promised that the unique concept “will provide audiences with a genuinely immersive experience built around an international quality performance programme”.

It’s based on a successful performance space in Amsterdam, and the only other similar venue is due to open in March in Tokyo with a capacity of more than 1,300, and seating set on a circular, rotating platform around which the stage and huge screens are set up. Apparently, in Liverpool we should expect a cutting-edge, multi-sensory experience not unlike that of an IMAX movie, so the city’s fringe theatre community are unlikely to find themselves gifted a new performing space.

At this point, though, it seems there are no precisely detailed proposals for the regeneration scheme as a whole. That so-called “masterplan for Ten Streets” should, it’s believed, be informed by the ideas, comments and feedback generated during a month-long consultation campaign.

The starting point for the consultation are Ten Big Ideas, encompassing such themes as innovation, culture, growth, connections and collaboration, that will provide a broad direction for future policy and an emerging vision.

The vision for the district, which contains a mix of historic dock warehousing and industrial buildings, is for an area where tech companies, digital businesses and creative enterprises can flourish alongside artistic organisations. At least that’s what an audience of creative entrepreneurs and city stakeholders have so far been told by Mayor of Liverpool, Joe Anderson. 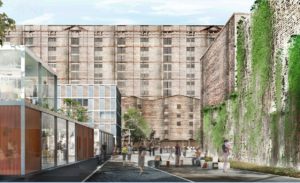 Other key elements include adding new squares and public spaces and making Ten Streets, which covers 125 acres of former dockland between the Northern edge of the city centre and the landmark Tobacco warehouse at Stanley Dock, “an exemplar neighbourhood for renewable energy”.

Ten Streets is part of the city’s big picture regeneration vision that is expected to deliver £11 billion investment and create 40,000 new jobs in total over the next ten years.

“The launch of this vision for the Ten Streets district is an opportunity of a lifetime to define Liverpool’s future as a creative powerhouse of the 21st century,” Anderson says. “For me, this new theatre says everything about our ambition for Ten Streets and how the creative sector can unleash the untapped potential of these once-celebrated docklands and make them once again a beacon of economic growth.

“As a creative economy district, Ten Streets will complement other employment areas like the Knowledge Quarter, Commercial District and Liverpool Waters to generate high value jobs and stimulate our economy for decades to come.”

Although the vision for the area is primarily as a new business and creative quarter, it is envisaged that culture, retail, appropriate scale residential development and an independent leisure offer will all to add to the vitality of the Ten Streets area.

Two days of public consultation at the Titanic Hotel and at the Foundation for Art and Creative Technology [FACT] followed the launch with an exhibition on display outlining the key aims and ideas for Ten Streets. Visitors can view the exhibition at FACT, 88 Wood Street, where it will be open on February 8 andFebruary 10 between 12 noon and 7pm.

The Ten Streets proposals can also be seen at tenstreetsliverpool.co.uk and followed on Twitter via @TenstreetsL3

Well, this is the best thing we've read all week. pic.twitter.com/FmYiZN50l4

But the shop opening has been delayed and funding applications closed due to COVID-19, so a crowdfunder has been organised to help towards purchasing specialist equipment to make shopping as accessible as possible. If you would like to donate to the crowdfunder, which ends (2/3)

A new zero waste shop is coming to Urmston, on a mission to make a difference more convenient. Goodness Zero Waste, opening on Crofts Bank Road, will be a one stop sustainable shop for plastic free food, beauty and household products plus lots of other exciting features. (1/3)