Everyone knows that 1966 was a great year. England won the World Cup, the phrase “swinging London” was used for the first time and, over in Italy, the events that led to Shakespeare writing The Two Gentlemen of Verona were being played out.

The historical sources for this latter assertion are admittedly vague, but that’s what the Liverpool Everyman would have us believe. The theatre’s associate director, Nick Bagnall, has set his current version of Two Gentlemen in that very year and, as a co-production with Shakespeare’s Globe, it has been touring the, er, globe since May. At last though, it has arrived home, and Everyman audiences now have a chance to experience the static tingle from all those artificial fibres for themselves.

In truth, this show is ‘set’ in 1966 in the same way that a fancy-dress shop could be said to be ‘set’ in that or any other year. Bagnall makes no bones about the fact that this is a concept that has been hung over the play like a tie-dyed shirt over a mannequin, so the question is not ‘is it authentic?’, but ‘does it work?’.

In fact this Two Gentlemen is bags of fun, and the central 1960s conceit throws up a lovely dramatic device that helps illuminate one of the play’s key themes. This is a play about young love, a subject that is easily translated into the teen passions of more recent times, and instead of the play’s crucial love notes that are passed from one to another, Bagnall substitutes a series of 7-inch vinyl singles.

As the needle is dropped into each groove – the hardware used is, of course, that boxy lo-fi beauty, the Dansette – the texts are transmuted into music, sometimes recorded, sometimes played by the show’s live band. The effect is deeply poignant, reminding us that while singles were once believed to be a throwaway art form – or not even art at all – the emotions engendered by those hook-laden hits, with their attendant physical sensations, remain with us for the rest of our lives.

The Two Gentlemen of Verona is generally thought to be Shakespeare’s first play, and though there are a number of themes and devices that are familiar from later works – criss-crossing lovers, girls dressed as boys – here they feel tentative rather than accomplished. 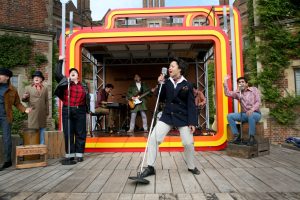 The two gentlemen of the title, Valentine and Proteus, both leave behind the beige and humdrum world of Verona, where it’s still more or less the 1950s, and arrive in the neon-lit kingdom of Milan where the 1960s are most certainly in full swing. They both set their sights on seducing Silvia, the duke’s daughter, which prompts Proteus’s previously benign traits to evaporate revealing a most unpleasant character intent on dispatching his former friend from the scene. Meanwhile, he is pursued by his former love Julia, who is understandably distraught at his unlikely personality transplant until, in a scene that prefigures a similar set-up in The Merchant of Venice, everything comes to a head in a moment of ring-based revelation.

As a text, then, the play is a fascinating curiosity at best, almost a sketch for good things to come. But as a production this show is far more enjoyable than that would suggest. It is laced through with exhilarating live music, and the multi-talented ensemble succeeds in packing it with plenty of punch. Although Katie Sykes’ neat TV-screen shaped set was evidently designed for ease of touring, it works wonderfully well in the Everyman. In fact, with a couple of extra rows of seats added and a consequent compacting of the space up on stage, it looks as if it’s where it belongs.

As with last year’s A Midsummer Night’s Dream, Bagnall seems to have consciously absorbed the Everyman’s spirit to create a production that feels very much part of this theatre. It’s irreverent without being disrespectful, and it’s playful without taking the piss. The cast have dug in and found genuine raw emotion beneath the sometimes tricky-to-penetrate surface and, after six months of very hectic touring, they know the play inside out and deliver a dynamic romp of a show.

All the cast equip themselves well, but I was particularly taken by Guy Hughes as Valentine. After initial misgivings, when I took the character to be wimpishly insubstantial, his trials and tribulations – often at the hand of sneaky Dharmesh Patel as Proteus – allow him to reveal a rich array of comic turns and emotional woundings. He’s a cracking singer too it seems, and amid much psychedelic rocking out in the final act, his own fragile 60s folk number is the show’s crowning goosebumpy glory.

So good luck to this Two Gentlemen of Verona as it reaches the end of its eventful run. Since it set out on the road six months ago, it has visited such deeply Shakespearean venues as Elsinore castle and the Sam Wannamaker Playhouse at the Globe. But when it comes to hearing the heartbeat of the 1960s, it may find that there’s no place like Liverpool.

What: The Two Gentlemen of Verona