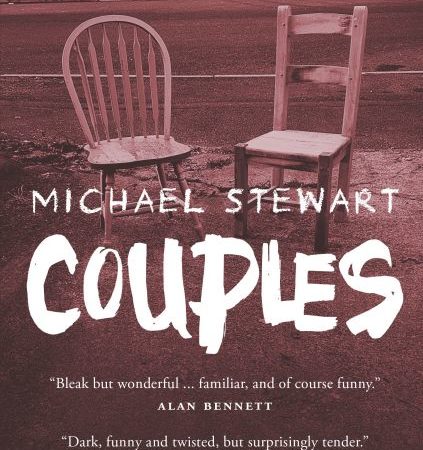 Originally published by Valley Press on Valentine’s Day in 2013, Couples, by acclaimed poet and novelist Michael Stewart, has been given a 2020 makeover with 12 new poems and a re-working of the original pieces.

The poems face each other in pairs, so the format of the book helps to accentuate its themes. Couples comes with a warning (“to be shared with your ‘other half’ at your own risk”) as if the collection might test the resolve of any couple who encounter its secrets.

In the opening title poem, the poet starts as he means to continue with a general look at how some couples go about their business:

‘Some are tent poles

propping each other up.

One falls over and the other topples.

From the first stanza the poet is suggesting that there’s a certain inevitability that relationships are doomed even when a couple provides support to one another. By the end of the poem, the reader continues to be unsettled as other couples are described as “two sheep in a field/chewing, chewing, chewing/until at last they can swallow”, suggesting that couples go on trying to accept their counterparts until they can eventually learn to live with them. From the off, we are led to believe that couples essentially exist to put up with each other rather than benefit from anything meaningful. This rather bleak and mischievous tone sets the reader up for what is to come.

In He, a man high on Valium which he keeps locked “in a box/beneath the bed” decides to paint the kitchen blue while his wife is at work. In the accompanying poem, She, it seems that the new look kitchen didn’t go down too well, although we sense that the she of the poem sometimes misses her spontaneous, if not Valium addled, ex:

But sometimes when everyone is out,

she sits in the kitchen

picking at the yellow paintwork

So she can see the blue beneath.’ 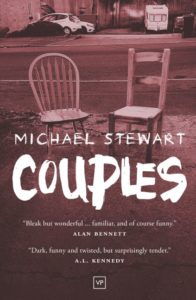 In another pair of poems, Me and You, me describes him/herself as “soft white porous sediment…made up of the bones of microscopic animals” who can “form tall steep cliffs…” This chalk and cheese metaphor allows the me of the poem to really go for it when describing his/her counterpart in the opposite poem You: “You can be sweet or sour. Sometimes you stink but the stench can make my mouth water”. A striking ambivalence is at play here from the ‘me’ to the ‘you’, in the coupling maelstrom where many opposites thrive or falter.

In the minimalist poem Your lips, the juxtaposition of lipstick and blood strike another unsettling note:

‘Next to my bloody razor

In the poem opposite, Your bath, one of the couple submerges in the “lukewarm mud” of their lover’s bathwater not only to bathe, but to “lift your tide mark off”. What the poet is suggesting here is ambiguous, but one could argue that submerging oneself in the murk of a lover can lead to some sort of cleansing. Or maybe it’s a just a way of articulating that couples accept their partners by submerging into their realities, however murky they may be.

This collection bristles with the strange intimacies and complexities of sharing your life with someone. It’s unarguably more bitter than sweet but familiar to all of us, and its range, focus and dark humour renders universal truths to make us laugh, cringe or maybe even cry at the banal absurdities some of us put ourselves through in relationships. Couples is an entertaining and hilariously brutal collection that never reveals whether the poet is writing with his tongue embedded in his cheek or warning us that co-existing with someone else just might be more trouble than it’s worth. Read it, whether you’re part of a couple or not.

Couples by Michael Stewart is published by Valley Press and is available to buy now.