There’s something about Waterstones Deansgate in Manchester. It’s the welcoming, colourful displays and the passion with which they celebrate local talent and history alongside bestsellers that makes it feel like a local bookshop.

I’m here for the launch of Beth Underdown’s debut novel, The Witchfinder’s Sister. Hailing from Rochdale and a lecturer in creative writing at the University of Manchester, Underdown is a Greater Manchester talent. Her first book is set in small town Essex during the 17th century and centres around English witch-hunter Matthew Hopkins. Although it’s hard to believe from the sheer number of bodies he racked up that Hopkins was a real person, alive and active when witch-hunting was common practice in England. While we tend to look upon the Salem witch trials with a hint of ‘only in America’, Underdown’s well-researched debut invites us to look closer to home.

Described as ‘vivid and terrifying’ by Paula Hawkins, author of bestseller The Girl on the Train, the novel is told through the eyes of Alice, Hopkins’ fictional sister, who returns to her home town following the death of her husband. She finds that things have changed, home no longer a safe place and Matthew is much altered. There are rumours spreading, whispers of witchcraft, and a book in which her brother is gathering women’s names.

It’s a well-written, pacy book. I’m not usually one for historical fiction – those dates and names leave me confused – and it took me a while to get into the story (which says more about my attention span than the novel) but Underdown weaves fact with fiction so effortlessly that it creates a thrilling tale and I soon found it tough to put down.

But enough with the spoilers and on with the launch. 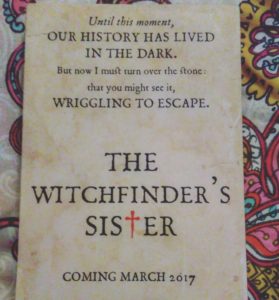 “Thanks for coming, everyone,” says Underdown. Having treated us to a reading, we’re now settled in for the Q&A. So, an audience member asks, how did she come across the tale? “I didn’t know much about the period before I started [to write] the book. We didn’t do it in school,” she admits. In fact, the tale of the novel’s conception is much more serendipitous.

“We’re not a huge family of historians but my great uncle was a history professor at Yale. He gave me his book and I stashed it on my bookshelf. Later, I moved back in with my parents to do a creative writing masters, in my childhood room with my childhood bookshelves, and there it was. I’ve never been super into history, but [the book] is very much about ordinary people’s lives at that time.”

Underdown hasn’t always wanted to be a writer. At first, she thought she’d like to be a midwife, and it was through reading up on the history of the professions, she came across the story of Matthew Hopkins. “It was as though my interests had aligned.” 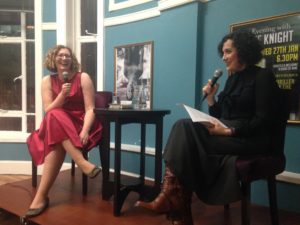 The most vulnerable people in the story are women. For Underdown, she was struck by the similarities in each of their stories. “What survived was the court records and very similar details were noted against each person. Overwhelmingly, women were more at risk. They were accused of reading the ‘book of spells’ and it was often documented that men were not present. Maybe literacy was threatening.”

My favourite character – and Underdown’s (“she’s like the aunty in my head”) – is Bridget. She’s an activist of sorts, aware of the atrocities. “She is someone who in a very straightforward way stands up against what is going on. Alice becomes aware that what she is involved in is evil, but she also reasons that what would it achieve if she sacrificed herself?”

She adds: “It would be a dull book if you couldn’t imagine yourself in the characters’ shoes,” says Underdown. “It’s easy to call someone a monster without experiencing their lives.”

As the session ends, there’s time for one final question. We can draw parallels between historical witch hunts and what’s happened since Trump’s presidency, but was this something that Underdown intended? Is the novel a comment on what happens when power is hijacked for an alternative motive?

“I think my answer is slightly disappointing. I didn’t go in with that agenda. I would like to have done so because that’s good and worthy, but actually it’s just what happened. History has this frightening way of repeating terrifying patterns and it shows that, in a way, not much has changed.” 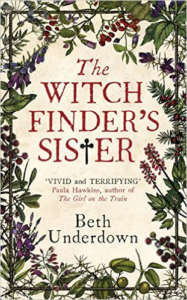 So, what’s next for Underdown?

She talks for a minute or so about the next book, complete with hand gestures, and there’s a rumble of excitement from the audience.