What do breakfast kippers, a curry and a book about law all have in common? No, this is not the start of a bad joke, but the reality for one mother. Harriet Harman’s mother to be precise – cooking breakfast for her retired husband with one hand, prepping the evening meal with the other while flicking through pages of a legal book as she returned to work as a barrister.

This is just one of many anecdotes Harriet Harman shared on Thursday night at Manchester Central Library as part of Manchester Literature Festival.

While Harman’s memoir A Woman’s Work has received rave reviews since publication earlier this year, it turns out it was never really supposed to be printed at all – or even written.

“Memoirs are really just terrible vanity projects,” she remarks as she recounts being surrounded by colleagues in the House of Commons’ chamber making notes in the margins about “how brilliant they’d just been in that meeting”. Meanwhile, Harman had bigger fish to fry. “I just kept on thinking, ‘come on, haven’t we got more important things to think about?’”

It was only when she visited a book store a few years ago that she felt differently. “I was looking at all these memoirs, you know, Tony by Tony, Dave by David, and I was looking through these memoirs and the only women in the pictures would be the wife, or a woman who was working for them. And I decided that needed to change. It’s been said before – you’re hidden from history unless you write the history.”

And what a history to tell. From the significance of power dressing (those shoulder pads had a purpose, you know) to confronting sexism and machoism, Harman has continually championed the women’s movement since becoming elected in 1982. 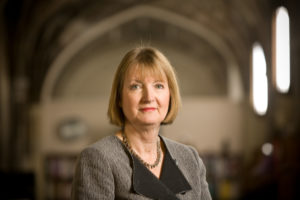 What I like about her memoir is the inclusion of so much about her personal life, such as feelings of maternal guilt which she talks honestly about. “I simply couldn’t give up or say, ‘it’s too hard’.”

Perhaps it was inescapable given her political achievements but, at one point during the evening, I wondered about the lack of attention paid to cultural and literary topics. So when host Sarfraz Manzoor passed over to the audience, I was ready to pipe up. Since we were sat in the beautiful setting of Manchester Central Library, could Harman tell us about a favourite book or literary inspiration?

But, suddenly, I wasn’t sure I dared stick my hand up. My query seemed trivial compared to the bigger questions being put to Harman; amazing nurses from our NHS asking about how to deal with adversity at work; people involved in the women’s movement during the 80s questioning why she hadn’t championed herself more.

Don’t get me wrong, these are all hugely important points which we must talk about. And yet there was part of me which wanted a momentary escapism from it all.

A hand on the other side of the room – the final audience question – gave me hope. 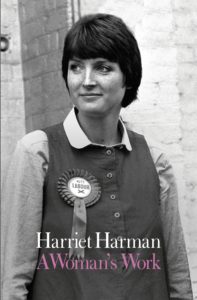 “There is something that we haven’t brought up today, one word which we haven’t mentioned…”

While I’m still waiting to find out about Harman’s literary heroes, I now think that maybe she is mine. Not just in literary terms, but as an activist, a politician, a mother, and so many other roles besides.

October 28 will mark 35 years since Harman became an MP. Starting her political career surrounded by many who questioned why on earth she was there, things have come a long way. But just because we’ve made some progress doesn’t mean she’s planning on stopping anytime soon. Solidarity, sister.

A Woman’s Work is published by Allen Lane and is now available to buy.