Have you ever got a bit nervous on holiday about immersing yourself in what could be very cold seawater? Or had a similar temperature-based feeling of trepidation when approaching an open-air swimming pool?

There are two possible solutions to this. One is to inch yourself in gradually and look a complete wuss – particularly at the point where it reaches your nether regions and you emit an involuntary little yelp – and the other is to take a deep breath, turn off your faculty of common sense, and chuck yourself straight in.

“A pleasure I have yet to experience…”

Option two is pretty much how I got into fell running. And now I’m immersed in it, I can’t stop. Well, it’s pretty hard to stop when you’re hurtling down a steep hill trying to keep up with the bloke in front of you who seems to be Half Man, Half Mountain Goat – but you know what I mean.

I only started doing running of any kind in April 2012 and ended up doing my first fell race five weeks later. So I wasn’t really even what you’d call a running feller when I became a fell runner. Of sorts, anyway. 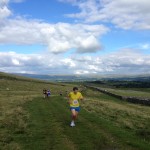 It was a bit of an accident, really. I’d been to the Primavera Sound festival in Barcelona, got back to London well after midnight on a Tuesday night, and happened to check Facebook. Some of my colleagues at Chorlton Runners (please join us) were planning to enter the Kettleshulme fell run on the Wednesday and did anyone else want to come? I’d been meaning to find some sort of race to enter myself in, and thought, I’ll be back in Manchester tomorrow night and I’ve nothing else planned, so why not?

Which is how, after nine days of balmy 23 degree Catalan sunshine, I suddenly found myself on a cold, drizzly start line surrounded by people with brightly-coloured vests bearing hitherto unknown legends like ‘Glossopdale‘, ‘Staffs Moorlands‘ and ‘Goyt Valley Striders‘. Before I knew it, I was flying along a muddy track halfway up a damp, misty Pennine with just a Newsagent Sandwich in my stomach, accidentally doing a 10-metre-long John Travolta-esque knee slide on a bit of muddy downhill…and feeling more alive than I’d done for years.

“Brings a massive smile to your face!”

There had been two massive climbs to negotiate that nearly burst my lungs, innumberable stiles to climb over, and a bit where you had to keep your forward momentum at all costs or risk getting literally bogged down in a bit that had got seriously sticky in the recent downpours. Despite nearly getting lost at one point, I arrived at the finish tired, exhilarated, and with just enough left in the tank for a sprint finish. 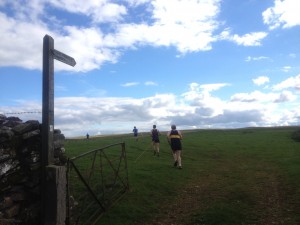 So that’s how the total immersion technique works. I had a basic level of fitness, normal road running shoes, and I think at that point I’d done maybe one 5k parkrun – and in my first race, I came 87th out of 127 runners in a time of just over an hour. And if I can do it, so could you…

Obviously I bought actual trail running shoes the following week. £35 from the Adidas Factory Outlet near Stockport – it’s not an expensive hobby.

Naturally, there are different levels of fell running. The real hardcore do things like The Bob Graham Round – over 60 miles taking in 42 Lake District summits and the record set by Billy Bland in 1982 is just under 14 hours. Even the Bob Graham Round isn’t enough for some – the Lake District 24 hour fell record is held by Mark Hartell who managed 77 peaks in 23 hours 47 minutes in 1997. It goes without saying that I’m not at that level. Or anywhere near it.

The listings on the Fell Running Association (FRA) website are graded for steepness (A, B or C – A being the steepest) and distance. ‘M’ (medium) races are between 10 and 20 kilometres long, ‘S’ means shorter than that and ‘L’ is longer.

There are a couple of other FRA categories that the beginner ought to avoid – to take part in ‘O’ (or ‘long O’) races, orienteering is a required skill and the MM category (Mountain Marathons or Mountain Trials) is an even more hardcore version of that: multi-day events in wild, mountainous country in which competitors must carry all equipment and food required for overnight camping. But if you’re starting out, you can’t go wrong with a CS or a CM.

“Much easier than everyone thinks it is!”

The Great Westmorland Trail Race (my favourite running event of 2013, pipping the Mousdashe by a short head) was graded as a ‘BM’ and was enjoyed by people of all abilities from my running club. The scenery was spectacular, the climbs weren’t too arduous (there was one long one towards the end), the people were very friendly and the cakes afterwards were fantastic. Oh, and Tony won the raffle afterwards. What’s not to like?

“The downhill makes it all worth it”

Another question which you sometimes get asked is “what’s the difference between fell running and trail running?” and I’ll admit I don’t know the definitive answer yet. Both are off-road, after all. Trail running is like cross-country but longer and more usually on well-marked paths and at lower altitude, while fell running often involves steeper climbs or crossing moorland. But at the level I’m at, there’s not too much difference to be honest. A glance at the Trail Running race directory reveals that the majority of their events are in the South rather than Wales, Scotland or the North – and perhaps there’s your answer.

“You versus the mountain, not the clock”

The other thing I’ve realised as I’ve done more and more running this year (eventually I got sucked in and become the kind of bloke that gets a bit too much pleasure from beating his PB) is that I love the freedom that fell running gives you. Running a 5k or 10k, you know what you’re capable of and it’s all too easy to get wrapped up in pacing and personal bests and feel under pressure to try and run the perfect race. Up on the fells, there’s none of that – unless you’ve run it before you’ve not much of an idea what the course is like and it’s pointless trying to conserve energy because even if you know how far you are into the race, you don’t know how what kind of ascents or descents you’re going to encounter…so you just let go and enjoy it. 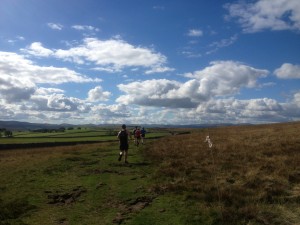 “Some pain, some pleasure, loads of fun “

There are other defining characteristics to fell running. As most of the runs I’ve done are in the Peak District, far too often it involves a battle with the M60 and a long slow crawl along the A6 through Stockport and its countless suburbs to get there. You will pay a small fee to enter (on average I’d say it’s half the price of your average organised 10k) and usually register in a gazebo or marquee outside a pub or village hall. And it’s really friendly. People of all ages, shapes and size take part – I was going to say ‘compete’ but for all but the fastest it really is the taking part that counts.

“Body of a twenty-something, face of a pensioner”

Talking of the fastest, there will always be lean, spry blokes in their 50s and 60s who will amaze you with their technique. Over the past eight months, I’ve evolved into a half-decent club runner and can run 5k in just under 20 minutes, yet on the downhill sections that some of these guys go past me like I’m standing still. Also, at some point, up a steep hill, you will think “is it actually quicker to walk rather than use all my energy trying to run?” (it usually is, by the way) and there will be at least one scenic panorama that will surprise or amaze you. Plus a surprising number of stiles, gates or fences to negotiate (there’s an art to that, but I’m not sure what it is yet).

And there’s always one genial white-haired bearded feller who seems to know everybody and must be 70 years old if he’s a day – but always only one, and not always the same guy. I’m certain there’s some sort of central committee somewhere that allocates the entrants, one per race, to ensure correct demographic representation. I sometimes wonder what would happen if there was a cock-up and two turned up on the day…would they get on? Would they run together like brothers, or would there be a surprisingly agile and very determined geriatric race-off?

You can’t deny it, fell running keeps you young. The views will be brilliant. And there will always be either beer or cake afterwards.

(thanks, by the way, to my fellow Chorlton Runners for providing the seven-word definitions of fell running) 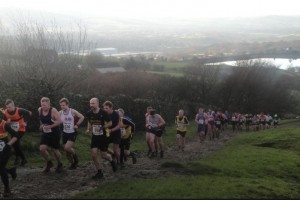