There are nearly as many ways for a group to get together as there are groups of people making music. But the first step on the path for new Canadian folk heroes The Small Glories, consisting of vocalist and clawhammer banjo-player Cara Luft, one of the original Wailin’ Jennies but a solo artist for several years, and guitarist/vocalist JD Edwards, sounds genuinely unusual and not a little challenging.

“There’s a venue in Winnipeg called the West End Cultural Centre,” Luft explains. “And about three months before its 25th anniversary, the artistic director started asking Manitoba artists who’d played there over the years to come and play at an event where all of us were partnered with someone we’d never worked with before, with the goal of learning two songs by other Manitoba artists. JD and I hadn’t even heard each other sing before, so it was kind of crazy when we were paired up.”

What, to coin a phrase, could possibly go wrong? Still, the two chose a song by Nova Scotia-born and Winnipeg-based singer/songwriter Greg McPherson, 1000 Stars, plus Neil Young’s Don’t Let It Bring You Down, even though they knew Young was “only an honorary Manitoban” having gone to high school there.

“We started rehearsing together,” recalls Luft. “And the way our voices fitted together was incredible. There was a moment when I realised this was what I’d been longing for and dreaming of for years and I’m pretty sure I actually screamed ‘Holy Shit’ from excitement. I think there were about 35 artists involved in the project, but we kind of stole the show because we were such a natural fit.”

But the pair still had their own commitments for the next year or so, including a European tour for Luft to promote her then new album Darlingford while JD continued working with his band, as well as with Dry Bones, a collaboration with The Duhks’ Leonard Podolak.

After returning from Europe, Luft found herself with free recording time at a new analogue studio in British Columbia.

“I had to use the time or lose it, but I didn’t have any idea what I wanted to say. I didn’t have a story to tell. I had hit a wall. As an artist you can’t keep spinning your wheels. I had been slogging it for several years and the progress had been incremental. Music had become a bit gruelling. I didn’t choose this musical path to become a superstar, but longevity and sustainability are important and, of course, there’s the passion card. 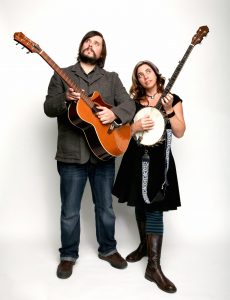 “Initially, I wanted to hire JD to sing and play on the album, but when we started rehearsing together I realised this was the direction and the story, and I didn’t want to pass it up. I fell in love with music all over again, something I hadn’t experienced in a while. We feel pretty fortunate that this was essentially handed to us and we went ‘oh wow, this actually has a lot of potential and we’d be foolish if we didn’t follow through with this’.

Luft acknowledges that the two of them could have easily continued going their own separate ways as artists and be fine. But, she says, “together right now is far better”.

She adds: “It’s all about being fulfilled in life and I’m very happy with this combination. It’s truly a partnership of equals. There’s something about the blending of our voices and the music that we make together that’s like nothing else I’ve done, and I want to keep doing it. I’m excited about what the future holds for us as a duo.”

JD chips in. “Cara brings a lot of love to my music and more spirituality, along with a lot more of a folk influence. It’s always important for artists to put themselves in awkward positions to challenge themselves, to explore themselves. That’s where the real art comes from, from figuring out how to come out of those situations, pushing yourself into a different realm of creativity and coming out of it empowered.”

Their other activities are, as Luft puts it, “on hiatus at the moment and The Small Glories is about 95 per cent of our work. We’re aware that to keep things fresh with The Small Glories, it’s also smart to let people know that we haven’t walked away from our solo careers or other projects but we want to see this through and we have high hopes for it. It was great to have the recording experience while we were still working on tightening up stuff. Now we’re excited about the next record because now we are so comfortable together that it will be really interesting to see what the next album is going to be like.”

Anyone who has heard Wondrous Traveler, which includes a couple of songs co-written with our very own Bella Hardy and has just been nominated for two Canadian Folk Music Awards, will probably be just as excited. But you’ll need to hold your horses until this time next year when that new album is most likely to appear. In the meantime you can see the duo, who were one of the most talked-about live acts at this year’s Americana Awards and Festival in Nashville, playing live a lot closer to home.

Torr Vale Mill is a wonderful Grade II listed former cotton mill located in New Mills, Derbyshire, tucked away on the picturesque ridge at the bottom of the Torrs Gorge by the River Goyt and Millennium Walkway. Built in the late 1780s by Daniel Strafford and initially powered by two waterwheels, the mill saw 210 years of continuous textile production before it closed its doors in December 2000. Although a fire destroyed one of the buildings not long after, there are now ambitious plans to restore the mill as a multi-purpose community resource.

For more information about The Small Glories’ gig in Derbyshire on November 19, 2016, follow the link for tickets on sale for £10: www.torrvalemill.co.uk.