Karen Connolly November 16, 2019 Arts, Bands & Gigs, Heritage, Music Comments Off on Staying Alive: the campaign to save The Gaumont where the Bee Gees first performed

Bee Gees fans from across the world have raised more than £250,000 in just eight days to try and save the former cinema in Manchester’s Chorlton where the brothers first performed live.

It’s quite the achievement. Chorlton Community Land Trust (CCLT) launched the Stayin’ Alive campaign, a community bid to save the historic former Gaumont cinema – now owned by Co-op Funeralcare – when it was announced the building had been put up for sale with the possibility of flats being built on the site. The campaign has gathered lots of local interest, including the Gibb brothers’ cousins, Hazel and Justine Gibb. 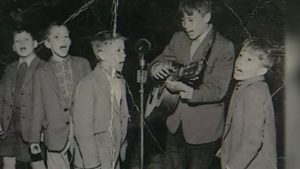 Hazel says: “The response to the fundraising has been phenomenal with generous donations from businesses and the public. To be fair, I don’t think the Co-op realised the history behind the building. Robin, Maurice and Barry used to go to the Saturday film club at the cinema when they lived on Keppell Road. During the break, kids were invited to mime to their favourite records. The record the boys brought broke on the way there so they sang live, for the first time.”

As a result of the support the campaign has gained, the Co-op gave the CCLT eight weeks to raise money to buy the building – which will be 100 years old in 2020.

“They said they’d be looking for a six figure number which was a huge amount to raise,” says Hazel. “As a result of this incredible achievement, the Co-op has given CCLT an extra 10 days to press on with fundraising with a new target of £500,000.”

The new goal will strengthen the bid and allow CCLT to have a more significant say in the final plans, which will maximise benefits for the local community. The organisation wants to convert the building into a market-style food hall, a well equipped and affordable gym, an improved health centre and affordable social housing.

Hazel comments: “We are also keen to create a new public square outside the building and, of course, have a Bee Gees museum inside.” 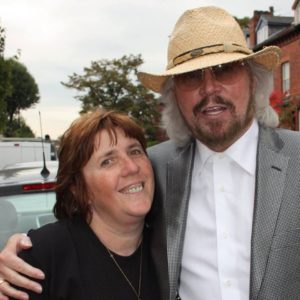 The campaign has received support from the surviving Bee Gee, Barry Gibb, who, Hazel says, has sent encouraging messages. “Barry always visits Chorlton when he comes to the UK, and he’s told me it would be such a shame to lose this gorgeous building.”

Robin Gibb’s son, R.J, has also championed the campaign and has written this on his Facebook page: “What a day for the fundraisers’ efforts to save the beautiful Gaumont cinema..in 1955 the Bee Gees’ debut performance as The Rattlesnakes took place in the building…I will continue to help in every way that I can and urge all who can give to assist the campaign…Love and warm regards, R.J Gibb.”

The CCLT has a meeting with the Co-op on November 18 when the route forward will be discussed. Simon Hooton from CCLT says: “There’s a lot of hard work ahead and the CCLT want to get this right.”

The group has been liaising with all agencies involved and Hazel says that the support of Chorlton councillors, especially Councillor Eva Holt, has been outstanding. 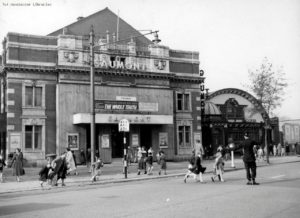 “Time is crucial to save this building and we have to persuade the Co-op to change its course. But, with people crowdfunding and buying shares in the scheme, we’re hoping this landmark of musical history will remain.”