Last Thursday in Manchester, with the wind howling and the rain falling so heavily that mass evacuation by ark seemed likely, the Hallé Orchestra opened its 2018/19 season under its guest conductor Karl-Heinz Steffens.

First up was Brahms’ Piano Concerto No.2 in B Flat Major with piano soloist Sofya Gulyak at the piano. The piece, melodic and moody, was first performed in Budapest in 1881 and the success of the subsequent German tour greatly increased Brahms’s exposure as a composer and pianist. It’s not difficult to see why.

As a season opener this demanding workout was all but guaranteed to blow the orchestral cobwebs away after the summer break, and Steffens proved more than capable of guiding the Hallé through its intricate registers, delicate counter-melodies and many elegant tonal shifts. Steffens’ understated handling of the baton drew out a fine performance from the orchestra and a perfect symbiosis with soloist Gulyak’s exquisite performance on the piano.

Gulyak, winner of the 2009 Leeds International Piano Competition, played with such accomplished passion, skill and dexterity that I was sure she must have made some Faustian pact with the God of pianists that saw her gifted with six fingers on each hand. It was a sublime performance in which she played both the keys and the emotions of the audience with equal élan. 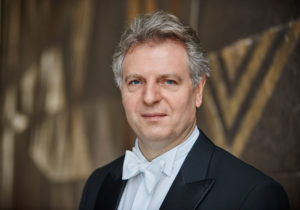 Up next was that most Bohemian of composers Antonín Leopold Dvořák and his Symphony No7 in D Minor, which he began to compose in late 1884. The year before had seen the Czechs step up their campaign for freedom from the Austro-Hungarian Empire and, as so often in Europe in the 19th century, culture was often the battleground in which the struggle for liberation was fought. This resulted in an official ban on the singing of songs in the Czech language and a crackdown on nationalist sentiment across the arts.

Dvořák came under pressure from his own German publisher to curtail the nationalist leanings in his work, pressure he resisted. Of his seventh, Dvořák told a friend this about its composition: “What is in my mind is Love, God and my Homeland.”

The seventh is thought by some to be his least obviously Bohemian, primarily I think because it is so clearly influenced by the works of Brahms and Wagner. Yet from the opening drum roll and distant horns the storm clouds were all too evident and were fated to return again and again throughout the piece, rising repeatedly to shattering climaxes before receding gently into graceful melodies, but still with the odd distant rumble of thunder.

This contrast between titanic forces and lyrical idylls was a repeated theme throughout the performance but one cannot help but wonder if quite all was inspired by the struggle for Czech freedom. By the time the seventh received its premiere in London in April 1885, Dvořák had already lost his eldest daughter and more recently his mother, and it is hard not to feel in the music the sheer pathos of that loss.

Despite the dark moods and the tumult of the storms rolling across the performance, it ended spectacularly with a powerful triumphant resolution; a prophecy of victory for the Czech people and a testament to their ability to resist and overcome oppression.

This, as in every other aspect of the symphony, elicited from the Hallé a model performance of graceful harmonic power that was both a delight to behold and a fine start to the 2018/19 season.