Katherine Clements April 7, 2018 Authors & Reviews, Books Comments Off on The Myth of the Moors: walking the coffin path

“What drew you to write about the moors?” an interviewer asked me recently. We were discussing my latest book, The Coffin Path, a 17th century ghost story set in West Yorkshire and conversation had turned, inevitably, to that great mother ship of Yorkshire landscape novels, Wuthering Heights.

I’m the first to admit that The Coffin Path is my homage to Emily Brontë and the landscape that inspired her, but my answer to that question is more complicated. Until recently I held a common view: that the moors are natural, untamed places, untouched by human hand, an oasis of wildness in our cluttered, over-populated environment. The vast open skies and desolate wastes are romantic, even spiritual. As poet Ted Hughes put it:

Are a stage for the performance of heaven.
Any audience is incidental.

But Hughes, a native of the Calder Valley, knew better than most that this romanticism is a relatively recent perception. The Coffin Path is set 100 years before Brontë’s masterpiece, when the moors were seen as dangerous, savage and deadly, the blanket bog a path straight down to Hell. The threat of the Devil and his minions was real. Belief in witchcraft was common. There were other dangers too: sprites, fairies and boggarts caused all manner of mischief and misdeeds, dragons slept beneath the hills, fiendish black dogs stalked the moors, and ghostly apparitions lured unsuspecting travellers to watery graves. The northern moors were busy with the supernatural. 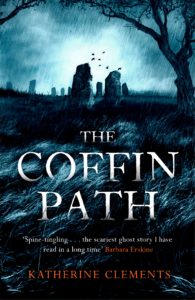 The West Pennines as we experience them today, with our Gore-tex and Thermos flasks, are not the untouched landscapes we assume them to be: they are a product of centuries of human habitation and climate change, of political and economic forces, and of a collective shift in our attitudes toward the countryside.

These once forested highlands were cleared for agriculture and grazing in the Bronze Age, causing the formation of the blanket bog that now defines the moorland. After the Norman Conquest, huge swathes of uplands were privatised for the first time and, in the 16th century, landowners began enclosing their estates, giving us the dry stone walls that epitomise the area to this day. Under the Parliamentary Enclosures Acts of the 18th and 19th centuries, common land all but disappeared, forcing people off the land they relied on for food and fuel, into the valleys and townships created by the burgeoning industrial revolution. This land grab eventually transformed the moors from an inhabited, working space into a playground for the wealthy.

Red grouse shooting became an aspirational pastime, popularised by the aristocracy, with the moors carefully managed to increase the grouse population. Alongside this Victorian ‘sport’ was the booming tourism industry. The birth of the railways enabled travel like never before, and concepts of beauty and the sublime, championed by the literati, encouraged a new relationship with the countryside (think Wordsworth’s Lakes, Scott’s Border Country and the Romantic poets). The natural world became a place for the new middle classes to find peace, escape and relaxation. Into this new psychological landscape came the Brontës.

Emily Brontë had an intense, complicated relationship with these moors. The centrality of landscape in one of literature’s great love stories is just one of the reasons for our own romantic view, warped over time by rose-tinted onscreen iterations of her famous novel. But, as Wuthering Heights proves, Emily was well aware of the hardship and danger for those living and working in this unforgiving environment – she witnessed it first hand. Since the 19th century, the Brontë story has been used to sell a sanitised version of the area to the cream-tea-and-comfortable-shoe crowds that descend every summer; only those who look more closely will see its dark heart.

The West Yorkshire moors tell a story. From prehistoric settlements and ritual sites to medieval packhorse trails, dry-walled enclosures and grouse butts, it’s a landscape that carries the scars of centuries. Depending on which track you take, it’s still possible to find yourself completely alone, nothing but a vast sky, the call of curlew and the whistle of the ever-present wind to spark the romantic imagination. But, as environmental campaigners will tell you, it’s a precarious landscape, ever changing, still unpredictable. The story is not over yet.

Katherine Clements’ new novel, The Coffin Path, is a ghost story set on the dark wilds of the West Yorkshire moors and has been described as “a wonderful piece of Yorkshire Gothic…like something from Emily Brontë’s nightmares”.