Out of Nowhere: launching a theatre company and taking on Homer’s Odyssey

Helen Nugent March 24, 2016 Arts, Theatre Comments Off on Out of Nowhere: launching a theatre company and taking on Homer’s Odyssey

I’ve just ordered 5,000 flyers and 100 posters. If I were to find a tiny error on them when they arrive, I would probably be inconsolable for at least a week. Everything I did, said, or experienced would be tainted by the thought of that tiny error. Perhaps, in a darker moment, I would shout that “everything is ruined” and question the point of the project…and my life.

My name is Rose and I’ve just started a theatre company. Our first production, The Oddity, is premièring at the end of April and it has come to define me as a person. This is not a healthy thing, and I do not recommend it. However, I dare to bet there are quite a few of you out there that have had similar experiences.

So why do we put ourselves through it? This is what I think (apologies for the philosophical musings – this is what happens when I try to get to the core of what the hell I’m doing and why the hell I’m doing it). Humans need art to cope with life. To cope with the fluke of being and the act of being. Stories help us bond, learn, teach, feel, empathise, understand, heal, hurt, grow.

If you look at the history of life on earth, human existence is a little speck. But it is all I will ever know. A couple of thousand years ago there was a poem. It was long and repetitive and told the story of a man who fought a lot, got lost a lot, and had a lot of sex and bad luck. But this is not his story. The Oddity does not tell the story of Homer’s The Odyssey. The Oddity tells the story of a young girl who cannot cope with life, like so many of us. She finds a way out: an ancient poem. And she finds out that thousands of years ago was really only yesterday and could even be today. 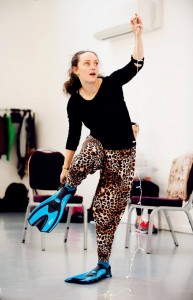 I haven’t travelled all over the world but I have lived in a few different places in a few different countries, with people from all over. We are far more alike than we are different. And the universality of having language, and using that language to tell stories, is at the heart of being human. So to me, that is what being human is. Language. And stories.

The Oddity is a theatre piece that cherishes these two things. It is a modern story and can be told to anyone. You don’t have to love language and stories as I do; you don’t need knowledge of the Greeks, you don’t even have to like theatre particularly. You can just sit down and experience her story. At the end, you can walk away and decide for yourself. Whether it was worth it. Whether it gave you some consolation, or food for thought, whether it nourished your soul, whether it amused you for a while.

I started Out of Nowhere to work in an open, collaborative way and to focus on the voices of female characters. This is why we are turning this traditionally macho story on its head. The Oddity is the result of me writing down a lot of ideas and playing with them with Chris Hill, director and dramaturg, and a bunch of talented actors. I don’t think I’m a playwright, but I like coming up with stuff: stories, plot ideas, scenes, dialogue. I enjoy puzzling them out with people and hearing their thoughts and ideas. And creating magic together.

The challenges along the way were many, and most theatre makers have faced these same things – lack of space, time, money, support. Through building up relationships with artists, venues and people, I managed to keep this project afloat. Just about. I submitted umpteen Arts Council bids and asked for many favours. 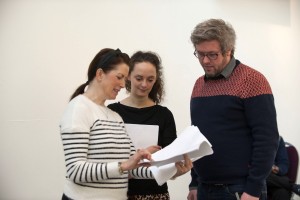 A few years ago, when I was at the beginning of my career, someone told me: “There is no conspiracy theory. No one is conspiring against your success. Sure, this industry is competitive and underfunded, so it’s going to be tricky, but no one is actively trying to stop you from achieving your goals.” This is good advice to keep in mind on those days when everything goes wrong and the world does seem to be your enemy.

So I keep on going, organising, attending workshops, meeting people, learning from others, making mistakes, trying again. I found a bit of money. I found a bit of space and time. I’ll do this thing. And tell this story.

Stories come out of nowhere, but at the same time they come from somewhere deep within. I’d like to share this story with you.