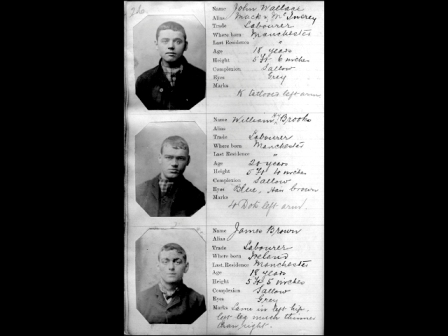 “…parents should be taught their duty, at present they seem either regardless of this or utterly afraid of correcting their children”. This isn’t a quote from Jeremy Kyle. It’s from the Manchester Guardian in 1880.

Long before the riots of 2011 or the gang wars of the 1980s and 90s, Manchester was in the grip of the first youth cult to sweep the nation. It was called ‘scuttling’.

Thought of as a reaction to the heavy and rapid industrialisation of Manchester and Salford, gangs of youths roamed the streets. The Bengal Tigers, Bungall Boys, Greengate Roughs and Meadow Lads meted out violence on their enemies in the never-ending fight for supremacy. 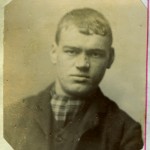 With their distinctive donkey fringe haircuts, cropped closely at the back and sides, with long fringes at the front, they were easy to recognise. They wore neckerchiefs with bright patterns or colours (demonstrating which gang they were members of), bell bottom trousers that were 14” at the knee and 21” at the foot, and clogs with brass tips.

Andrew Davies, author of The Gangs of Manchester, spoke to Northern Soul. He draws a parallel of football hooliganism with the scuttlers’ “obsessions with fashion and appearance, using precise ways to distinguish themselves from other lads”.

Where you lived determined which gang you belonged to: Bengal St had the Bengal Tigers and Angel Meadows had the Meadow Lads. These ties were so strong that if a family moved area, the lads would travel back to spend time with the gang. The uniform of scuttling made navigating the city difficult as they tried to avoid enemy territory.

As violent as they were, they did have limits. Davies explains: “They used potentially lethal weapons but generally avoided killing each other so there was some sort of shared code.”

The weapons favoured were heavy ornate belt buckles; the leather belt would be wrapped around the wrist and an opponent hit hard causing serious injury. These belt buckles became a prized trophy in a fight. Scuttlers also used knives and stones, much to the detriment of the police who would try and break up a scuttle, only to find that rival gangs had joined forces to repel them with a barrage of stones.

The first written reference to scuttling was in the 1868 Dictionary of Manchester Boys Slang, terming it ‘boys from one street fighting another street’. By 1870 the newspapers had picked up the term and the meaning changed from streets to gangs. When defining the term to a magistrate during one of the many hearings, a policeman admitted it was a word that came from the boys themselves.

Scuttling itself started around 1870 and within the first year around 500 lads aged around 12 or 13 were convicted. But this didn’t quench the thirst for violence. “There were occasional cases of theft but a lot of it was about the thrill and reputation of violence at the expense of others like you, but they had to be like you for it to mean anything,” says Davies. 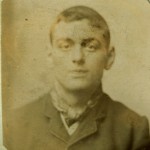 Scuttlers were demonised in the press, feeding the established theory that life in the North was brutal. Davies comments: “Local authorities in Manchester and Salford sent a deputation to the Home Office. There was a suggestion that scuttlers were sacked but there was no legal footing and it didn’t affect their work.” In fact, Saturdays were the preferred days for scuttling for this very reason, leaving Sunday to recover before work on Monday.

How did the community react to this?

“The response from the community was very ambivalent. There was sympathy for young people getting in trouble with the law and resentment to the police. As scuttling wore on, fathers and uncles had previously been scuttlers and felt it was right and proper for the lads to stand up for themselves.”

Davies explains that support for scuttlers could be highly organised: “Two gangs in Salford, Hope St and Ordsall, had a long series of wars. At one point six lads were in court, [it was serious enough] to be dealt with by a judge rather than a magistrate. A witness said they first heard of the fight when they bought a raffle ticket to raise money for a solicitor.”

Other members of the community suffered at their hands. “In some cases people were badly terrorised by scuttlers, for example if they complained about noise, this was especially if people were not very established in neighbourhood networks.” 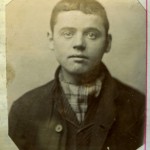 But scuttlers had a shelf life.

“Lads would drift out of gangs aged 19, 20 or 21 due to serious courting or taking on more adult roles in the workplace and becoming a man,” says Davies. There was also unwritten ageism from within. When a 23-year-old joined a fight it was deemed unfair by other scuttlers.

The popularity of scuttling diminished from the late 1890s to the outbreak of the First World War. Global conflicts and the demolition of the slums had an effect but the rise of the Working Lads Clubs are credited with having the greatest impact.

At these clubs, lads were given access to craft, reading, lectures, trips away and, most importantly, sports such as football, rugby and cricket. They channelled their energies and old rivalries into these and the scuttling that had gripped the city slowly disappeared. 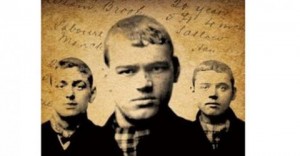