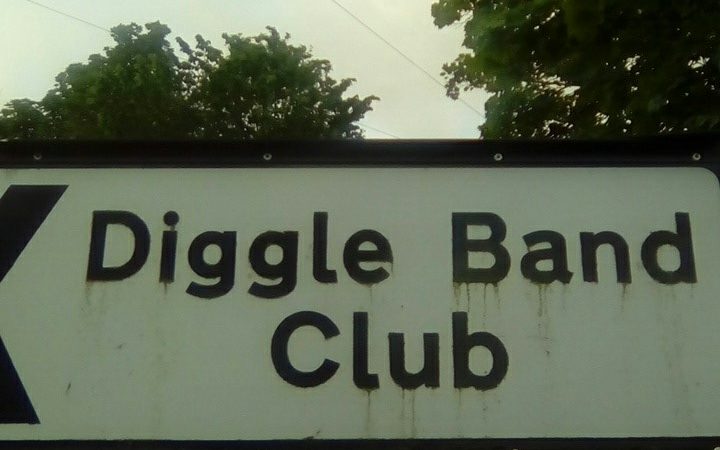 This Whit Friday found me in the South Pennine town of Diggle which has hosted a brass band contest since 2013 as part of the annual Whit Friday Brass Band Contests in and around Saddleworth.

The one defining element of the brass band movement is tradition. This is shown in the persistence of the brass band contest from the earliest days of the movement. Perhaps the most well known contest is the Whit Friday Contests, often billed as ‘The Greatest Free Show on Earth’, where more than 100 bands descend upon towns and villages around Saddleworth to compete in as many contests as possible in one afternoon and evening. 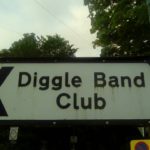 The earliest recorded contest was in 1884, together with competitions in Mossley and Uppermill. These events reflected the popularity of musical competition in the region, and the Southern Pennines were readily associated with choral groups and brass bands. Over the years, many reasons have been given for the high quality of musicianship in this area. One argument that became popular from the late 19th century to the first decades of the 20th was because the area was hilly and, because of the physical exercise involved in walking around the area, Northern musicians were fitter, had better lung capacity and, therefore, a better quality of tone for singing and playing in brass bands. However whimsical this theory, from 1900 onwards it gained currency in the brass band journals to explain why bands from the Pennines should be more successful than those from other parts of the country.

In 1914, the band periodical the British Bandsman argued that “it cannot be denied that the home of the brass band is on the slopes of the Pennine chain”. Writing in 1979, the brass band historian Arthur Taylor pointed out how important Saddleworth was to the brass band movement, arguing that in the golden age of brass bands (c. 1860-1914) “the whole area of Saddleworth could almost be designated a national park for brass bands, with Dobcross as the centrepiece”. 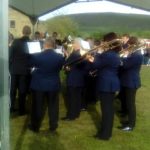 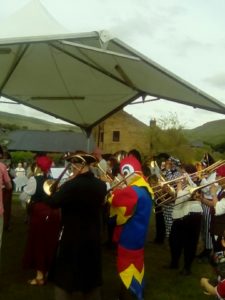 Indeed, in the space of five hours this last Whit Friday, 36 bands had played and more were waiting (a total of 59 bands visited). Of the 36, the industrial heritage was inescapable. Brighouse and Rastrick, Delph, Slaithwaite, Lindley, Hebden Bridge, Milnrow, Marsden, Rothwell Temperance and more passed through the portals of the Diggle contest field during the day. Many of these bands have a history that can be traced to the first contests, and many were Victorian ‘crack’ bands.

In addition, the contest echoed traditions during early days of the movement, from the audience (some of whom watched the bands closely) to others who made it a social occasion. As contest pieces, many of the marches played have long been part of the brass band movement’s repertoire. Ravenswood (William Rimmer) and Knights Templar (George Allan) are two of the more popular examples. Finally, and reflecting a tradition lasting from the 1840s, the band adjudicator judged from a place that had no view of the bands, and where they had no band identification apart from a number.

The modern contest now attracts many international bands, particularly the Swiss. Among the bands who visited Diggle were Brass Band Lengau (Switzerland), 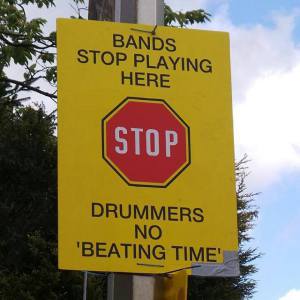 A nice element to the competition is the fun part of the day, from the groups with tongue-in-cheek names such as Symes and Them: Over 60s Youth Band, to those who wear fancy dress such as Pirates ‘R’ Us and Wild-West Brass. In other towns I hear it was possible to find Star Wars Stormtroopers. This all makes the Whit Friday contests a special day in the international brass band diary.

For me, however, it is tradition that is distinct. Writing in 1901, the periodical Good Words reported that “brass band contests evoked white-heat enthusiasm in local people; they were important factors in the social life of the people, thousands of people took the keenest interest in them”. In other words, the brass band movement is living history, a musical link to the past, and an expression of how people lived their lives. The Whit Friday Contests are a direct link to the Victorians of the Southern Pennine towns.