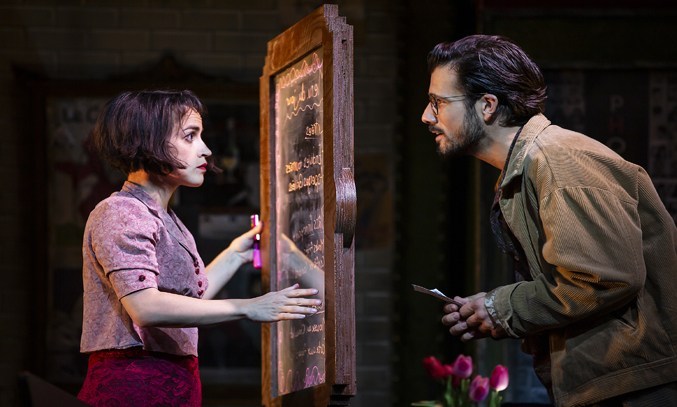 I’ve pondered before in these pages on the apparently insatiable appetite of musical theatre producers for hit films that can be transformed into stage hits.

The fanciful French language fairytale film Amélie, set in a highly-stylised, dreamlike Paris where dreams actually do come true, was well-received in 2001 by the art house audiences who’d loved writer-director Jean-Pierre Jeunet’s previous films such as Delicatessen and The City Of Lost Children. But it was hardly a mainstream blockbuster, making it an unlikely candidate for such a make-over. Yet a capacity audience for its opening night at Manchester’s Opera House indisputably fell for its charms, despite a surprising number of them having apparently not seen the film and thus likely to be somewhat foxed, at least plot-wise, by the muddy sound that afflicted the first half. 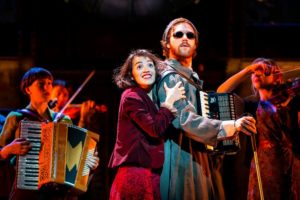 It was originally adapted for Broadway by Craig Lucas, who has written the book for this adaptation by the rather splendid all-singing, all-playing Watermill Theatre which has consciously brought this version closer to the film, wryly observing that “something about the French penchant for irony, whimsy, poetry, romance, indirection, philosophic musing and satire is easily lost over the ocean separating the two cultural landscapes. By and large, there is an allergic reaction in the US to any slightly symbolist or figurative tale in which adult audiences are invited to respond with childlike wonder to anything other than money.” Indeed, and this adaptation is, tonally at least, very much in line with the original sub-title of the film, The Fabulous Destiny of Amélie Poulain.

A whimsical depiction of contemporary Parisian life in Montmartre in the 90s (Princess Di, or at least the idea of ‘the people’s princess’, plays a significant role in the plot and gives rise to one of the show’s best musical jokes), it tells the story of a shy café waitress Amélie Poulain, played here with mischievous energy by French Canadian actress Audrey Brisson (whose parents were both in Cirque du Soleil in Montreal), who decides to change the lives of those around her for the better while struggling with her own isolation. Her eccentric parents brought her up so over-protectively that her best friend was a goldfish, while the staff and distinctly eccentric regulars at the café where she works are nearly as concerned about her. Her accidental discovery of an old tin box full of someone’s childhood memories sets in train a series of unlikely but enchanting encounters, most significantly with Nino (Danny Mac), a nerd in search of a mysterious man who has his photo taken in the various Metro stations, then inexplicably tears them up. It’s the sort of fabulous tale where people might be killed by fat, suicidal Canadian tourists falling from Notre Dame, garden gnomes can become globe-trotters and love lies in waiting in the most improbable places. An indefinable but rather lovely show if you’re willing to go along for the ride, it is also, incidentally, almost worth seeing just for the gorgeous set.

Amélie The Musical is at Manchester Opera House until August 10, 2019. For more information, click here.