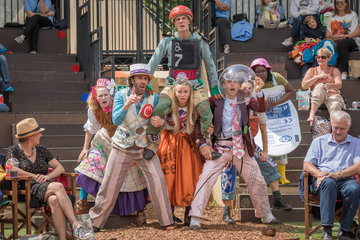 It was always going to be interesting to discover how the world of The Borrowers, those helpful miniature beings, would be created. At Chester’s Grosvenor Park Open Air Theatre, it began with an empty stage.

Somehow our family never got around to this book as bedtime reading so much of the play was unknown territory, just as the world is for the Clock family (Pod, Homily and daughter Arietty), searching for somewhere cosy to live after being forced out of their home by a marauding cat and/or ferret.

Homily is in the (more than) capable hands of Lisa Howard, winning laughs whether she’s fretting over how they are going to manage, becoming confused, or rapping. To her disgust, Pod (a solemn Chris Wright) thinks a discarded old boot is a shoo-in. All kinds of rubbish are put to ingenious use – a cat toy, Space Hopper and, in a nice touch, a massive Babybel cheese, and the costumes are made of bits and pieces with Homily’s dress being a washing instructions label. The women are all colourful and the men’s attire more serviceable. Oggy Oggins’ uniform befits a would-be superhero. 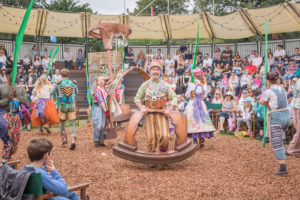 Meanwhile, Vanessa Schofield is an engaging, articulate daughter and scapegrace as Arietty, but Homily’s brother Hendreary, played by Steven Elliott, seems to have little to do while Jessica Davies as his wife Lupy is proper posh in her designer label hat, albeit softened by a touch of kindness. They are also on a quest, seeking their missing daughter Eggletina, but this is pretty much a sub-plot despite egregious reminders popping up at times. Then there’s Ronnie Rainpipe (Sarh-Jane Potts), determined to get yer man. Much of the comedy derives from Oliver Overmantel (whom Jospeh Millson plays as extremely posh indeed), delighting in his flaws as much as in any drink in the vicinity.

The play’s powerful message is the need to recycle and look after the planet, conveyed through the Borrowers who clean up after human beans’ mess. 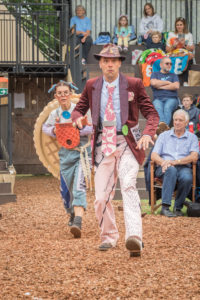 However, some may feel it’s a shame about the romance conjured up between Arietty and the intrepid Spiller (Marc Benga) who comes to her rescue. As for the dotty Heliotrope Harpsichord (Seren Vickers), who also brings some humour to the table along with anything else she can borrow, her delightfully shy flirtation with Oggy Oggins is nonetheless reminiscent of Barbie getting betrothed to Action Man. So perhaps the best twosome, despite the bizarre choice/combination of names, are Whitney Kehinde as Daenerys Drudge and Mitesh Soni (Tyrian Trudge) who brilliantly evoke the wildlife in the park.

You can always count on Grosvenor Park Open Air Theatre to deliver the goods and to foster a genuine sense of community – all of which was clearly evident from the enthusiastic audience participation.

The Borrowers is on until August 25, 2019. For more information: grosvenorparkopenairtheatre.co.uk