Theatre at its most theatrical: the must-see production of Orlando

Helen Nugent February 26, 2014 Arts, Northern Soul writes..., Theatre, We burn witches Comments Off on Theatre at its most theatrical: the must-see production of Orlando

Christ, Jesus, the Royal Exchange‘s production of Orlando is good.

In a canon which dwelled on inner and outer darkness and popularised the stream of consciousness narrative, Virginia Woolf‘s fictional biography is one of her most accessible books (for anyone who has tackled The Waves, this will come as a relief). But it’s not necessarily an easy novel and requires the reader to make an almighty leap of faith about half way through.

Woolf’s bold idea was, in Jeanette Winterson‘s, words “to write a novel as though it were a biography, and to call a fiction a life, and to invent that life around a woman the author was in love with [the aristocrat Vita Sackville-West], and to stretch her over 400 years”. Blimey – that’s a lot for one book and certainly a challenge to fit into a two hour play (with interval). But Manchester’s Royal Exchange has been rather bold of late (witness Cannibals, All My Sons and the upcoming Last Days of Troy), surprising seasoned theatre-goers with its ambitious and eclectic programming.

Of course, there’s always a danger in adapting a novel that has consistently won fans for nearly 90 years. I read Orlando as a student and, unlike some of Woolf’s other books, found it easy to navigate. I fell in love with its magical prose, the sense of aliveness that permeated its pages and an overall sensation of joy effortlessly conveyed by Woolf. But would director Max Webster and adaptor Sarah Ruhl taint this memory forever? My sister refuses to see To Kill A Mockingbird on stage in case it ruins her love for her favourite book. 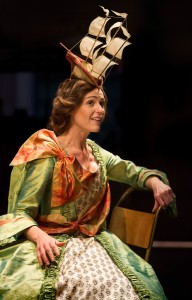 It was obvious from the first scene that we were all in safe hands. Rather refreshingly, Ruhl had opted to retain the lyrical narrative (in many cases word for word) and Webster had infused the whole production with humour and whimsy. This was theatre at its most theatrical, its most fantastical and its most enjoyable.

The audience held its breath as a Russian ice-skater flew across the stage suspended in a barely-there harness, blankets stood in for frozen rivers, a grotesque Elizabeth I prowled around her bed chamber lusting after the young Orlando and maids simpered in the background, all to the delicate strains of the cello played by the superlative Hetti Price.

For a narrative spanning four centuries, it was some ask to demand that just four actors tell the story. No need to worry though for Suranne Jones (in the title role), Richard Hope, Thomas Arnold and Tunji Kasim were more than up the task. Man, they acted their socks off. Jones in particular shone as Orlando, peeling off her clothes as Woolf unveiled the many layers which made up her protagonist’s long life. Jones was the same person and yet she was not, switching genders, exploring notions of the self and casting aside the constraints of being a woman. As Orlando would say, ‘Christ, Jesus’.

If you’re a Woolf devotee, go and see this. If you’ve never read a word by her, go and see this. The novel itself sent shockwaves through the literary genre when it was published in 1928 and Woolf is rightly held up as a trailblazer for her depiction of gender and sexism in literature. Yes, some of her writing is totally baffling but as Julia Briggs put it in her dense yet thorough examination of Woolf’s life, “The novel’s flights, its idiosyncratic version of ‘magic realism’ have proved particularly freeing and enabling for other women writers.”

One school of thought goes that our collective history is the history of men because they wrote it. Woolf’s Orlando deflates that argument with a single prick. 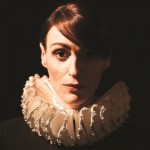