There are productions for which the business of rating by stars can feel reductive. This is one of them.

Ostensibly a performance of Anton Chekhov’s first teenage piece of theatre, it is in fact a 75 minute exploration of theatrical peccadilloes, and the pursuit of real meaning – whatever that is – within art. It is at once admirable in its inventiveness and hugely self-indulgent. Intriguing and baffling. An attempt to puncture some thespian pomposity that ultimately disappears up its own posterior.

Whatever else Chekhov’s First Play might be, Dublin company Dead Centre’s award-winning production is certainly not boring. Three stars feels, in that context, enormously mundane. Yet it was partly great and partly awful. So what to do? Certainly, the central staging device – headphones worn by each audience member through which an increasingly ridiculous ‘director’s commentary’ is piped – was pleasingly inventive. That commentary, from real life co-director Bush Moukarzel, is simultaneously funny and thought-provoking about our constant need to search for layers of profound meaning even when the raw material, as in this case, is pretty dire. 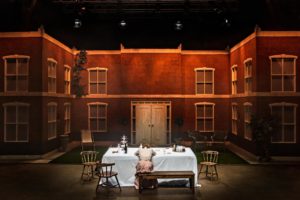 “The play is getting in the way of me explaining it,” a faux-exasperated Moukarzel declares into our ears, as he pontificates from off-stage on themes of property, status and longing in the manner of a waspish audio version of those Letts Guides that get you through GCSE English. Moukarzel gets increasingly agitated as his actors fail to ‘get’ and deliver his vision – a vision that has involved axing multiple characters and all of the context that might have made Chekhov’s script make sense in the first place – and his diatribes make it increasingly impossible to pay any attention to the actual on-stage acting.

And then, just as this in-ear wittering begins to tip from funny to tiresome, it disappears. Hard to explain how or why without spoilering the final half hour, but suffice to say that if ever I wanted commentary to a piece of theatre, it was the section of this production after this explanatory voice in my ear went away. There was dance music, the shedding of costumes and poor (perhaps deliberate?) lip synching as 19th century Russia melds into modern Ireland. There was also a wrecking ball. Beyond that, your guess is as good as mine. After half a show that was obsessed with meaning and half a show that apparently lacked any, I left feeling glad that people make theatre like this and also glad that I had finished watching it. What is the meaning of that?

Chekhov’s First Play is at Liverpool Playhouse until May 11, 2019. For more information, click here.