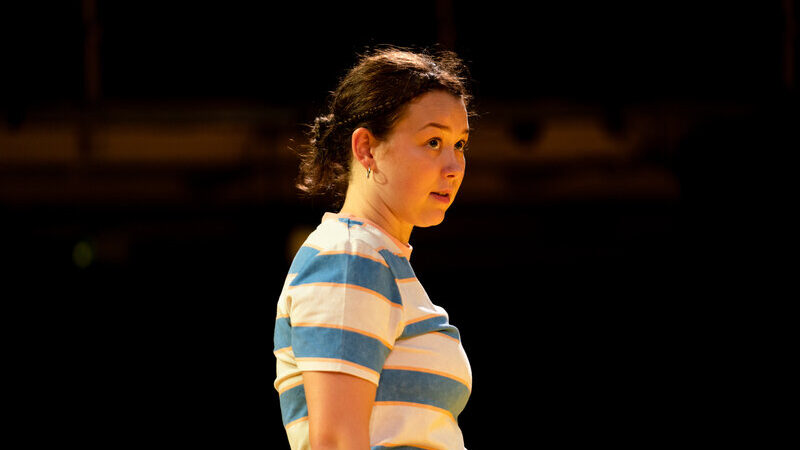 Fans of The Take on YouTube will have seen the one about ‘The Sick Girl’ trope. The girls in ‘Sick Girl’ movies all have similar characteristics. She’s beautiful and her illness makes her glow. She’s bursting with positivity despite her poor health, occasionally rude (because facing death has made her direct) and wise beyond her years, a trait borne from her unique perspective on life. Often, she only exists so she can impart said wisdom onto a man. Pass the sick bag, Alice, as Private Eye used to say.

But no sick bags are required at Manchester’s Royal Exchange. This finely written, finely performed piece about a 16-year-old girl diagnosed with Glioma Multiforme, an aggressive brain tumour, manages to escape the clichés through its hilarious brutal realism. 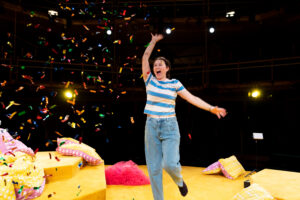 Liv Hill gives an extraordinary performance as Lola, the dying girl. You might remember her from Three Girls, the television series about the Rochdale scandal for which she won a BAFTA. In Glee and Me, Hill is alone on stage for 90 minutes (which is a hell of a stretch, even for the most experienced actor) and she manages to engage the audience completely throughout the production. Now, I’m terrible for looking at my phone to see how long there is until the interval. But this time, I didn’t even think about it. Hill made me laugh a lot and I would like to say that she also made me cry. But she didn’t. And that’s the point. Hill’s performance is ruthlessly unsentimental. 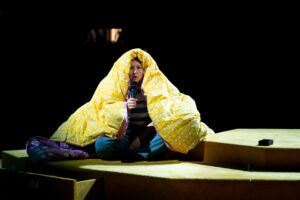 Hill does have some excellent writing to work with. Stuart Slade submitted his play for the Bruntwood Prize, which is the UK’s biggest national competition for playwriting (and a joint venture between the property company Bruntwood and the Royal Exchange) and, among more than 1,000 entries, his was selected as the winner. Slade was a documentary filmmaker who turned to writing and has been pretty successful. He’s had productions in London at the Trafalgar Studios, Theatre 503 and The Royal Court. He can clearly write. The fact that he manages to successfully inhabit the mind of a 16-year-old girl dying from cancer is a testament to just how good he is. That the play holds us with one actor for 90 minutes, even more so. 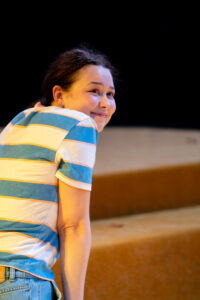 Hill works the auditorium skilfully. The Exchange is a hard venue for an actor. The audience members seated at ground level look you firmly in the eye and, usually, those on the upper level feel like they are staring at the top of your head. Northern Soul was in the gods for this outing and didn’t feel any of that. Hill included us in everything.

My only quibble is that there were one or two moments where I couldn’t hear her, usually when she was talking quickly and a little too quietly. Oh, and if you’re going to do the bright light thing, then the light must be extremely bright. They’ll know what I mean.

Considering the theme, this is an entertaining evening. I wish I’d been able to take my 17-year-old stepdaughter to see what she thought of the show. Apart from anything else, if you want see the work of a couple of artists who are going to be famous, do trot along. Then, over dinner in 2040, you’ll be able to say: “Oh, Liv Hill. Yes, we saw her back in the 20s, in that play by Stuart Slade. She was great, even then.”

As a result of the COVID-19 pandemic, the Exchange is only working at 70 per cent capacity and we were asked to wear masks throughout the production. There was plenty of room, but quite a lot of people ignored the mask instruction.

All images by Helen Murray

Glee and Me is at the Royal Exchange in Manchester until October 30, 2021. For more information, or to book tickets, click here.