Theatre Review: The Animals and Children Took to the Streets, Liverpool Playhouse

Fran Yeoman October 22, 2018 Arts, Theatre Comments Off on Theatre Review: The Animals and Children Took to the Streets, Liverpool Playhouse

It is barely 70 minutes long and its constituent parts are a trio of women with white-painted faces, an unseen piano and some cartoons. But The Animals and Children Took to the Streets is one of the cleverest, most innovative, funniest and thought-provoking pieces of theatre I’ve seen in a very long time.

Courtesy of 1927, the small but much-lauded company run by writer-director Suzanne Andrade and animator Paul Barritt, the audience is taken on a disturbing foray into the Bayou, the despised and neglected slum estate of a prosperous city. Here we enter Bayou Mansions, a tenement block infested with cockroaches, perverts and ‘Wayne the Racist’, the whole thing brought to chaotic life by ingenious animations that make us feel like the actors are ascending in elevators, or that we are peering down with a birds-eye view on their sleep. If you are born in the Bayou, we are told, you die in the Bayou too. The laconic caretaker is trying to get out, saving his pitiful earnings under his mattress, but even he has in reality accepted his lot. “I sat in the broom cupboard contemplating my loneliness,” he writes in his diary. “Then I ate a KitKat. All in all, it has been a pretty good day.” 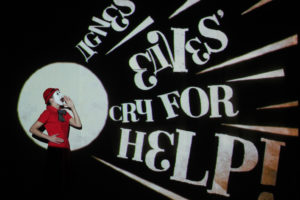 Agnes Eaves, a well-meaning middle class mum takes umbrage on behalf of the Bayou’s neglected children, and arrives armed with PVA glue, lentils and pasta bows to run art classes that are promptly over-run by feral animated delinquents. It is a wicked, chaotic, sordid eco-system but nobody from outside bats an eyelid while it remains self-contained. Then Zelda, a teenage revolutionary, issues her call to arms: “We want what you have out there!” and her young ‘pirate’ comrades go on the rampage in the city’s leafy park, demanding “decent living conditions, an education and an X-box”. Before long, a sinister, cat-stroking mayor has hatched a dastardly plan to reform the Bayou brats, and Agnes’s beloved (animated) Evie is swept up in it. Mary Poppins’ Spoonful of Sugar is subverted to become a wickedly menacing refrain, in keeping with the show’s noir-meets-Berlin cabaret aesthetic, and we wait to see which signposted ending the caretaker will choose; idealist or realist.

It is remarkable, watching all this, to think that the show premiered in Sydney in 2010, a year before the UK riots that it so presciently foreshadowed. Depressing, perhaps, that seven years after those riots it still feels bang on the money. And noteworthy that even in this brilliantly-acted production about the forgotten youth of our cities’ blind spots, the one middle class child in the tale becomes its focus, the lamb in need of rescue. We think we want to care about the offspring of Wayne the racist and the “21-year-old grandmother” from the Mansions, but they remain faceless and nameless. When the going gets tough, Agnes clears out. Her excursion into the Bayou was nightmarish but, as an observer, I can think of few more engaging ways to spend an evening. 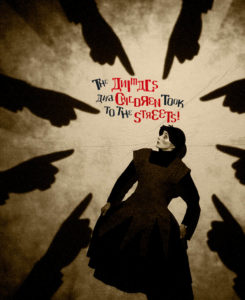 The Animals and Children Took to the Streets is now on tour. For more details, click here.