Helen Nugent October 4, 2017 Competitions Comments Off on Win two pairs of tickets to The Fizz Festival Cheshire as it returns to Altrincham

Following on from its sell-out success, which attracted around 400 visitors, Altrincham Town Hall will once more host the Fizz Festival and Fizz Festival People’s Choice Awards, now in its third year.

Come and meet some of the most passionate and knowledgeable industry experts all keen to tempt you with their fantastic range of fizz from around the world.

There will be around 100 wines available to try and buy, from Cava and Prosecco through to award-winning English sparkling wine and of course, Champagne. The ticket price includes a free tasting of all wines with no need to buy additional tokens. Quite a challenge.

This year the festival organisers have attracted some amazing new suppliers to keep the line-up exciting and fresh. They include some local suppliers including:
• Veeno: Italian Wine café in Manchester
• Oddbins: A fantastic choice of fizz from their Chorlton based store
• Booze & Burn: Manchester based maker of candles in recycled champagne bottles
• Define Food and Wine in Northwich: Gorgeous wine shop and deli in Cheshire 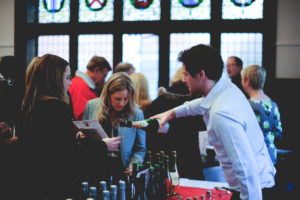 There will be a pop-up food area, live music and free masterclasses. All great fun with a chance to try before you buy with fantastic discounts available on the day.

So, if you love your fizz and fancy getting your hands on this brilliant prize, all you have to do is sign up to the Northern Soul newsletter (details of how to do this are on the right-hand side of the page) and send an email to emma@northernsoul.me.uk with the title ‘Fizz Festival’.

Winners will be picked at random and notified by: October 30, 2017

About The Fizz Festival

Cracking Wine was set up by Janet Harrison in 2015. It runs fun and informal wine tasting events around the North West.

The company organised the UK’s first Fizz Festival at Altrincham Town Hall in November 2015 which was a sell-out event. It was a fantastic mix of specialist retailers, producers and importers of Champagne and sparkling wines from all over the world. An English Sparkling wine: Camel Valley Rosé won the Fizz Festival People’s Choice Award in 2015.

In 2016, three awards were created. Best Champagne went to Champagne Thienot, Best Sparkling Wine UK to Hush Heath and Best Sparkling Wine Rest of World to trail blazing importers Red Squirrel Wine with a fantastic Canadian fizz.
The concept has expanded over the Pennines with a Fizz Festival in Harrogate on 4th November 2017 at the Majestic Hotel.

Following the success of the Festivals, there is a Fizz Club membership scheme in place with many discounts and offers from local retailers as well as tasting events and producer visits at venues across South Manchester and Cheshire. Details can be found here.