Theatre Review: There Is A Light That Never Goes Out: Scenes From the Luddite Rebellion, Royal Exchange, Manchester

Kevin Bourke July 31, 2019 Arts, Theatre Comments Off on Theatre Review: There Is A Light That Never Goes Out: Scenes From the Luddite Rebellion, Royal Exchange, Manchester 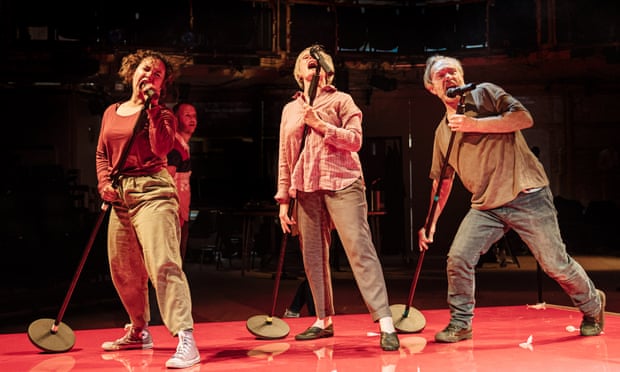 There was no little irony in the fact that the press night opening for a play about the luddites should be delayed by a malfunctioning microphone. But it’s worth remembering that, although the term ‘luddite’ is most likely to be used these days to semi-humorously describe someone unable to fathom their smartphone or the like, there was a time a couple of centuries ago when it had far more serious and violent overtones.

In the early 19th century, Manchester was one of the most advanced cities in the world, overflowing with innovation. But the first stirrings of the Industrial Revolution saw tens of thousands of weavers, once a highly-skilled and valuable employment, rendered redundant as factory owners turned to newly-invented and much more efficient machines such as the Spinning Jenny in their relentless and brutal pursuit of greater profits. Angry workers in many places across the North, facing a very real threat of starvation for themselves and their families, believed that bosses were using technology as an excuse to beat down the workers, so smashed the new machines or burned the mills. Written off as dangerous enemies of progress, these isolated protesters became even more threatening to the authorities when they united behind a shared fiction of their glorious ‘leader’, one General Ned Ludd, also known as Captain Ludd or even King Ludd. Hence ‘luddites’. 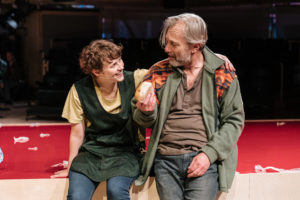 Predictably enough, the powers-that-be reacted with ferociously punitive measures, including transportation and even execution.

That’s the historical basis of this devised piece from Kandinsky Theatre Company, and co-creators James Keaton and Lauren Mooney observe that “culturally, we now look upon the Luddite rebellion as pointless resistance. The tide of the Industrial Revolution was going to sweep over them whatever they did.” But isn’t it valuable to resist the notion that progress is always right at any cost?

This perfectly legitimate argument gets rather lost, unfortunately, in a mish-mash of contemporary reports, laddish modern-dress malarkey, and a lot of increasingly irritating ‘business’ involving, for some reason, microphone stands, with any potential dramatic tension undercut by characters offering hindsight-informed commentary on some of the historical characters played by the six-strong cast. The device of portraying ‘Ludd’ as a threateningly voiced bogeyman, played by all the cast at various times, is, though, quite effective throughout a production that never really lives up to its potential, where even references to the very building the audience is sitting in, home to some of the key moments in the rebellion, seem far less resonant than they could, and should, have been.

It’s probably worth noting, however, that in the bad old ‘good old’ days at Manchester’s Royal Exchange, before Sarah Frankcom took over as artistic director, a challenging production of this sort is unlikely to have found a home on the main stage of the Exchange at all. As she heads off to pastures new, she surely deserves all our thanks for her ceaseless efforts to make the Exchange far more relevant to modern-day theatre-making than it might have been in the recent past. 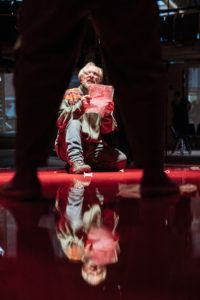 There Is A Light That Never Goes Out is at the Royal Exchange until until August 10, 2019. For more information, click here.

Tags: Kevin Bourke, Royal Exchange, theatre review, There Is A Light That Never Goes Out: Scenes From the Luddite Rebellion