I have an enduring memory of a production of King Lear. I think it was a school trip, probably because the play was on the curriculum. While I later came to love this Shakespearean tour de force, I’ve rarely seen a version which really brings the text alive, and this early adaptation was no exception. Set in Japan (not a successful choice) with a skeleton cast, the only enlivening moment came when a portion of curtain fell down to reveal Goneril playing the xylophone. To say this diluted her on-stage villainy would be an understatement.

I was reminded of this lacklustre Lear recently when chatting to the artistic director of Manchester’s Royal Exchange, Sarah Frankcom. Not, I hasten to add, because the Exchange has ever bored me to tears with a king’s descent into madness, but because of something Frankcom told me.

“There’s no point doing anything that’s safe in a theatre. You should shut up shop if you’re doing something that you already know how to do, or if it’s programming that’s just about trying to fill seats but doesn’t have a question at the heart of it, or doesn’t have an inspiring and creative vision at the heart of it. That can be the kiss of death.”

This goes to the core of why I love the Exchange, and have done since an evening in 1989 when I was transfixed by a young woman dressed all in white, lying on the floor and holding a small glass animal. She was admiring the delicate creature, turning it round and round so it caught the light. This was The Glass Menagerie and I was 15-years-old.

It’s now 2017 and I’ve been a journalist for nearly two decades. During this time I’ve interviewed a slew of big-wigs and celebrities, but there’s still nothing quite like talking to someone who makes magical experiences, who creates memories for thousands of people, and who is in charge of a space which makes my spine tingle just thinking about it.

Frankcom has been artistic director of Manchester’s 700-seat, theatre-in-the-round for the past three years, although her history with the venue extends back a further seven. With the new Autumn/Winter season in full swing, I ask her about the opening production, Thornton Wilder’s Pulitzer Prize-winning small town epic of human existence, Our Town.

“I think Our Town is one of playwriting’s best-kept secrets. It’s the most performed play in America. Someone said that at any moment in time, there is a production of Our Town happening in America. The things that I like about the play are probably the things that have made it so popular with high schools in America because it celebrates a community on stage. It tells the story of a small town at the turn of the last century on the east coast of America, and very particularly tells the story of a boy and a girl who fall in love, marry, and then the third act then does something rather astonishing, and takes us forwards and takes us backwards to see the very moment when they first met each other, but also the moment when one of them is no longer in this life.”

She adds: “The play puts people and relationships on stage in ways I think are universally recognisable. Anybody who has lived in a community and anybody who’s been a neighbour and anybody who’s been brought up in a family – so that’s pretty much everybody – is in there in some way, shape or form. It celebrates some of the bigger events in life but it’s also really, at its heart, a passionate plea for us all to take a moment and stop and really invest and appreciate life as we live it before it’s too late.”

The genesis for staging Our Town dates back to May 22 when a terrorist detonated a bomb at Manchester Arena. That night, 23 people were killed, including the attacker, and 250 were injured. Frankcom explains: “When we were talking as a programming team, as a play it felt really appropriate and really right. We were looking in the aftermath of the terror attack and we were having conversations about what we thought our role as a theatre was, and it seemed very clear that it was an important time to make some work which was about celebrating difference. And also describing and making work that looks at the things we have in common.” 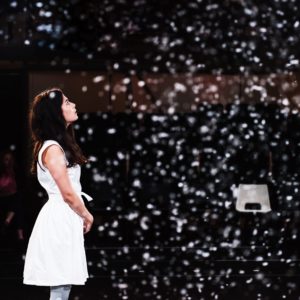 She continues: “I think it’s about trying to represent the many different kinds of people who make up Manchester, and trying to connect a play that was written in 1937, and is set 30 years before that, that’s now being performed in 2017.”

The Royal Exchange is currently commemorating its 40th anniversary year. I wonder how Frankcom manages to keep the programme fresh and relevant.

“In the last few years while I’ve been the sole artistic director it’s really been about having a diverse group of people around me. We collectively programme so it’s really important to me that there are a lot of different tastes and different generations and people from different kinds of backgrounds who are part of that conversation. We’re always thinking about how to reach out to the city and to the region. Alongside that we have a massive talent development programme and a really exciting stable of associate artists and supported artists.

“For me, for every classic or play that exists that’s being revived, a theatre has to be making an investment either in a brand new artist making it or looking at that piece of work through a very different lens. Or you have to be investing in brand new play or a brand new work by an emerging artist. What we try to do is keep both of those things going at the same time. This season we have three brand new pieces of work.”

Among the premieres is Derek Jarman’s Jubilee, adapted and directed by Chris Goode who is known and respected for his iconoclastic body of work. This new version of the cult punk film stars the epitome of 80s pop, punk and new romanticism (and original cast member), Toyah Wilcox.

Frankcom says: “Keeping any theatre fresh is about pushing and undertaking risks. We’re very fortunate at the Exchange that we have a growing audience who are really excited about coming to see work that they don’t already know. That cuts across all sorts of different people. Manchester audiences have always been really interested and excited about being at the birth of something. It always feels to me that it’s about our art form and if we don’t invest in new plays and get them out to the biggest and widest possible audiences then we are not looking after the future of our art form. It’s a bit of a no-brainer. But it is risky. And maybe it’s quite addictive.” 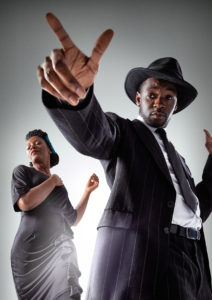 As for the theatre’s Christmas show, this year it’s a co-production with Talawa Theatre Company: Damon Runyon’s infamous stories of the New York underworld, the musical fable Guys and Dolls.

“There’s an exciting thing about our space where everything has to be reinvented” says Frankcom. “The show is being moved to Harlem and set in the Harlem renaissance. It’s being re-orchestrated, it’s being choreographed by Kenrick Sandy and directed by Michael Buffong. I think it will be very obviously and very clearly a classic musical. But actually doing that musical in the round means that, right from the beginning, there is a very different lens on it in order to be able to make some of those big choreographed sequences work. What we find all the time is that every play feels different in our space. And that’s something that never ceases to amaze me.”

Frankcom is a theatre person born and bred. After a stint as a drama teacher in the East End of London, she started working with new writers and in drama schools, later spending time at the National Theatre studio, Ovalhouse in South London, and The Red Room. She also taught at The Poor School in King’s Cross. Since joining the Royal Exchange, her productions have included shows loved by critics and audiences alike. Consider That Day We Sang, written by Victoria Wood and later turned into a TV special. Then there’s Black Roses, the heartbreaking account of the death of Sophie Lancaster, and The Masque of Anarchy, an extraordinary rendering of Shelley’s poem and a co-production with the Manchester International Festival. And let’s not forget the Exchange’s female version of Hamlet in 2014 with Maxine Peake in the lead role. Peake is now an associate artist of the Exchange. But what makes her such a compelling collaborator?

“We’ve grown up together so I guess we’re both excited by the same things, we’re both interested in telling stories that haven’t been told before. We’re really interested in different representations of women and finding compelling female experiences and journeys on stage. And I guess what makes her for me a great personal artist to collaborate with in the rehearsal room is that she doesn’t ever want to do anything that she knows how to do, and neither do I. There’s a huge amount of putting ourselves in places that are quite uncomfortable and I think we can take bigger risks together than we maybe could separately.”

The same kind of fearless attitude could also be attributed to Julie Hesmondhalgh, recently seen on our screens in Broadchurch. She returns to the Exchange following her award-winning performance in Wit. In the premiere of The Greatest Play in the History of the World, written by Hesmondhalgh’s partner Ian Kershaw, the former Coronation Street actress will be on stage alone, in the midst of a love story set on Preston Road. 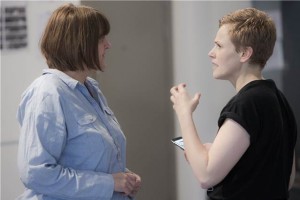 “Both Julie and Max have it in their DNA – they’re not just actors, they’re artists,” reflects Frankcom. “They’ve got a very strong political conviction, they both believe in the importance of arts and the theatre as being a means and an instrument for social change. They’re also very committed to making work in the city. What I really love about Julie is not only is she an amazing actor but she’s also really interested in working with a wide range of different people. She’s an incredibly compelling performer and I think her in a solo show is a no-brainer.”

As my chat with Frankcom draws to close, I bring up an old chestnut: Manchester’s much talked about ‘cultural renaissance’.

“What excites me the most about what’s happening and changing in Manchester is the energy among emerging artists, and artists that are choosing to move here and make their work here. A lot of Manchester artists are making big, national ripples. And I think it’s a notion that Manchester can be a place which will support you as a maker, and you can grow an audience in Manchester for what you do. And you can be part of a community of like-minded people who are interested in exploring and making theatre. There’s always been a fringe in Manchester but it feels like it’s really growing very quickly and there’s more ambition and real can-do attitude.” 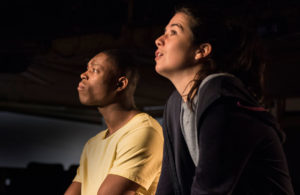 Our Town is at the Exchange until October 14, 2017. For more information, click here.

For details of the theatre’s Autumn/Winter programme, click here.