“This truly is a retreat for dedicated and casual gamers.” Northern Soul reviews Virtual Hideout Manchester

Chris Holmes May 26, 2018 Arts, Gaming Comments Off on “This truly is a retreat for dedicated and casual gamers.” Northern Soul reviews Virtual Hideout Manchester

Nestled in a new outdoor stretch of bars and restaurants near the Odeon in Manchester’s Great Northern, Virtual Hideout Manchester is the latest haven for those seeking a gaming fix with a primary focus on VR.

The brainchild of the team behind the hugely successful Breakout Manchester, this fledgling hub is still being pieced together a week after opening, with the challenges of a listed building providing the odd speed bump for this most modern of enterprises.

However, it would appear that Breakout Manchester is onto a winner here. The location is perfect and the venue has already lured in many a wandering gamer, a bank of screens welcoming visitors with the excellent Rocket League and game of the moment, Fortnite, set up for tournament play. 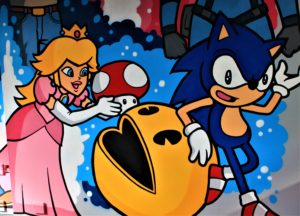 While plans to double the six screens should prove a draw for those enjoying a post-work pint in the surrounding watering holes, the prospect of Virtual Hideout’s multi-player VR basement and surrounding console gaming areas (currently under construction), has to be the biggest pull. Indeed my guide for the evening, Daniel, had access to an extensive VR catalogue with which to wow me.

With a VR headset leashed to a pulley system in the ceiling and two handsets firmly grasped, I had my pick of Steam-based VR gaming, all of it incredibly immersive and addictive.

A virtual version of Fruit Ninja kicked things off, getting the blood pumping as I sliced through masses of fruit with dual Samurai swords. It turns out I’m rather rubbish at chopping huge flying produce. Still, this was a curiously cathartic start to proceedings and served as a good introduction for getting your eye in.

Next up was Steam Lab’s own highly addictive Longbow, swapping sword for bow and arrow as I cut down waves of cartoon invaders from above as they attempted to invade my castle. As with many simple concepts, this was a highly addictive experience which provided a visceral sense of accomplishment, right down to the twang of the bow reverberating through my hand as I unleashed another volley at my prancing quarry.

Daniel then stepped things up, transporting me into the neon sci-fi of Space Pirate Trainer, a truly excellent shooter which combines shield and blaster mechanics to leave the player ducking and diving as they repel waves of flying alien drones. A fantastically polished title which combines great visuals and audio, I could easily have spent an hour or two just getting my Han Solo vibe on. But a funkier lightsaber experience awaited.

Beat Sabre takes the traditional rhythm game and subverts it slightly by utilising the double handed VR mechanic, placing two lightsaber-style laser swords in your hand and asking you to carve in signalled directions through oncoming blocks while avoiding the walls which fly at you – all this in beat to some tasty electronica. This is another joy of a game I wouldn’t have necessarily chosen, and which can really work up a sweat on higher difficulty levels. 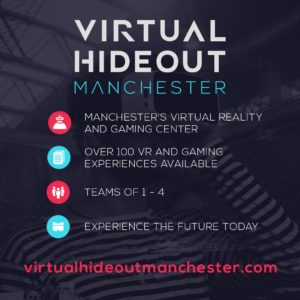 One of the selling points of Virtual Hideout is the sheer volume and diverse range of games available to suit all age ranges and tastes, combined with the friendly expert staff who ensure you get the most out of your experience, tailoring the journey to your palate through an intimate knowledge of the library.

So it was that Daniel teed up my final two experiences based on earlier throwaway comments made in conversation.

Firstly my love of horror was catered for with the frankly terrifying Exorcist Legion. I was treated to the first episode; more than enough to jangle my nerves as my investigations of a crime scene in a poorly lit church spiralled into a terrifying supernatural journey. Suffice to say this was an experience in the truest sense of the word, and one which left me screeching like an idiot.

Finally, a passing mention of my fear of heights obviously tweaked a mischievous streak in Daniel as the dingy church gave way to bright sunlight and a beckoning lift entrance. When the lift stopped I was greeted by a small plank at least 50 storeys up. It was here that the true quality of current VR tech shone through as I had to fight against body and mind to step out and then step off the plank, plummeting to the street below.

It was a fantastic way to finish my time at Virtual Hideout Manchester which, without doubt, has all the potential in the world for a great night (or day) out. With a sliding scale of pricing for up to four people, which can reduce your hourly rate significantly, both on and off peak, plus a city centre location away from the hustle and bustle, this truly is a retreat for dedicated and casual gamers alike. 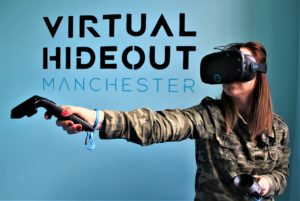