Inside Manchester Central Library, Black Lives Matter co-founder Patrisse Khan-Cullors and award-winning author Jackie Kay ask ‘what does freedom look like to you?’ In a discussion that raises more questions than it answers, Khan-Cullors begins by examining the systems in place that continue to keep people of colour (POC) under surveillance and under suspicion.

Reports of racial hate crimes have risen since the Brexit vote and the ‘post-racial’ America that Obama put in place has since been erased. We appear to have become accustomed to generalising and labelling communities with a presumption of guilt attached to POC. Khan-Cullors’ memoir, When They Call You A Terrorist, allows the reader to enter a world unexplored. A real-world story that follows the shared experience of many POC whose families grew up in poor communities. It is also a unique story of punishment and containment that shaped the push for a political movement.

Trained as a community organiser from the age of 16, as a black queer woman Khan-Cullors was viewed as living outside of the margins of even the black community. Faith-based discrimination and a constant police presence forced her to the frontline. Speaking about how schools equipped with metal detectors, guards and bars have become indiscriminate from prisons, Khan-Cullors plays with the language used to stigmatise her family at an early age.

The memoir is split into two parts, with the first half exploring her childhood in depth. Khan-Cullors describes how mass incarceration left few behind to nurture, protect and defend families. In a community with limited resources and programmes in place, people-powered campaigns become vital. De-stigmatising mental illness, Khan-Cullors also addresses overlapping forms of inequity. Her brother, Monty, was arrested and charged with terrorism after getting into a car accident. At 18, he was diagnosed as having Schizoaffective disorder by a prison doctor but it was alleged that he was stripped, beaten and starved by prison staff for the years he remained behind bars. The second half of the book focuses on Khan-Cullors’ activism and adulthood where Black Lives Matter has been labelled a terrorist organisation and her home raided in response to her push for justice.

The Black Lives Matter movement appeared in 2013, rallying communities into action after George Zimmerman was acquitted of the murder of Trayvon Martin. The question of self-defence was raised over racial profiling and, in the end, it was a Stand Your Ground statute that made it legal for Zimmerman to follow the 17-old high school student home and fatally shoot him.

The hashtag #BlackLivesMatter spread organically, and Khan-Cullors continues to work with founders Alicia Garza and Opal Tometi to fight discrimination. For women, there remains a larger issue of a lack of representation in leadership and social equality, but Khan-Cullors’ memoir shines a light on the women typically forgotten from their own narratives. Offering a platform for inclusivity and a recognition of shared trauma, this is a movement that has helped the rise of #SayHerName and #MeToo. Organisations started by black women who have strategised and shaped the way for everybody to raise their voice. 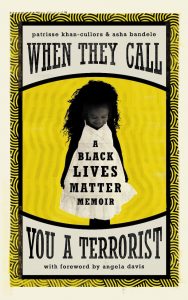 When They Call You a Terrorist: A Black Lives Matter Memoir by Asha Bandele and Patrisse Cullors is published by Canongate and is now available to buy.