On the trail of galloping horses: Northern Soul heads to Athens

Steve Slack August 23, 2017 Uncategorized Comments Off on On the trail of galloping horses: Northern Soul heads to Athens 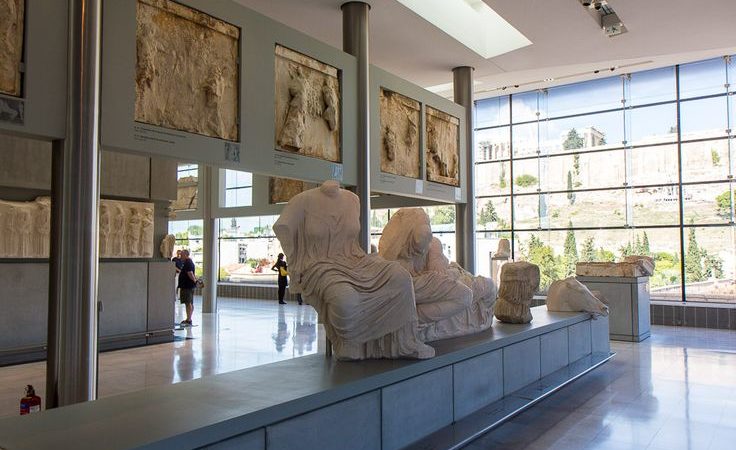 Standing in the central hall of Manchester Art Gallery looking up at the decoration on the walls, a row of sculptures of men riding on horses caught my eye. Those delicately balanced riders, those gently bobbing hooves, almost dancing around the walls.

Sometimes when we look at objects in museums and galleries, we assume they’ve always been there, locked in time forever.

But I realised I’d seen this procession of horses somewhere before – not in this art gallery, but in the British Museum. These sculptures from the Parthenon – originally from the temple of Athena in Athens – were brought to England by Lord Elgin in the early 1800s. Elgin’s name is often associated with this group of marbles, along with the debate over how the sculptures came to the British Museum and where they should now reside. 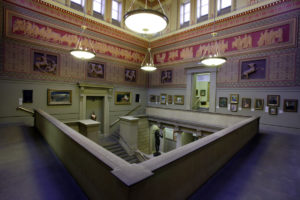 Cutting a long story short, the sculptures were removed by Elgin, brought to the UK, purchased by the UK Government and handed to the British Museum. The claim that he was saving the sculptures from ‘barbarians’ is debatable and controversy still dominates the Elgin marbles.

The sculptures soon captivated the imagination of the public and before long everyone wanted a piece. So much so that plaster copies of the sculptures were made and sold to fans, who could display them in their own homes – large homes, admittedly. And one copy ended up in Manchester.

Inspired by the journey of these sculpture copies – from Athens to London to Manchester – I walked a few blocks to The Portico Library, where I suspected there’d be mention of them in its collection. There I found Richard Lawrence’s etchings of the sculptures (1818), including the horses. In book form, it’s possible to look at the sculptures close up, rather than craning one’s neck to the height of the gallery walls.

Artists in the 19th century gazed upon these sculptures with wonder and respect. They represented the highest degree of elegance and perfection, unrivalled in ancient or modern times. In his introduction to the drawings, Lawrence writes “who, indeed, can survey these matchless specimens of human talent without being lost in admiration?” I tend to agree.

For them, this was contemplation of the sublime. For me, it was the start of a journey. I decided to follow the story of the galloping heroes and so took a trip to Greece. 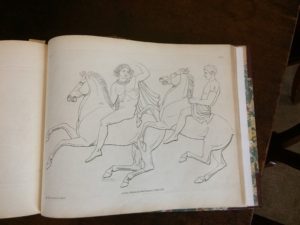 The birthplace of democracy some 2,500 years ago and the seat of learning for generations, Athens has at times been one of the most influential cities in Europe. While economic hardship and political uncertainty have tended to dominate headlines of late, there’s more to Athens than a debt crisis. It is a city that balances robust tradition and ancient lumps of sculpture with a young population and thriving arts scene.

Athens used to have a reputation for being a dirty city. It might still have some grime about it, but it also has a strong character and a proud sense of history. Across the city, some traditions are as immovable as the stones.

And at the heart of the city is the Acropolis, the site of the Parthenon and once home to the sculptures I’d seen in Manchester and London. 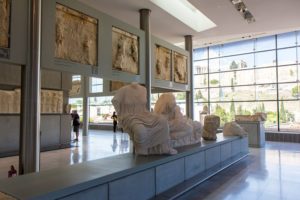 Part of the problem of interpreting the Acropolis as a visitor is that it’s set high on a hill, towering over Athens. It’s visible from almost anywhere in the city (note: if your hotel offers an Acropolis view, don’t assume that’s unique – almost every building has a vista).

To understand the Acropolis, you need to climb it. In the Spring that’s okay, but in the height of summer (when it can regularly reach 40 degrees) it’s a sweaty slog. And this is the very climb that the procession of real-life horses once undertook, up to the Parthenon.

Those who have made the ascent are rewarded with a panoramic view and it really is worth the effort, if only to burn off some of the gyros (little kebabs for a couple of euros) you’ll have been eating down below.

But the jewel of the crown is the Parthenon itself – once the temple to the goddess Athena, it’s also been a church, a mosque and a military garrison. The Greek authorities are restoring the main structure as much as possible, but their job isn’t an easy one given the many attacks, earthquakes and lootings that have taken place in the past 2,500 years. To me, it felt like a journey was complete as I stood now looking up at the original home of that procession of galloping horses I’d seen back in Manchester and London. This is the place where their hooves clattered and their capes flew in the wind, then immortalised in carved stone for generations. 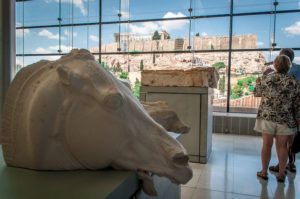 Part of the reason the UK has been reluctant to return the sculptures which once adorned this enormous temple is the suspicion that Greece was not able to care for them. Despite efforts to improve the air quality in Athens, pollution is still high in the Summer which would do the stones no good, and the small museum at the summit isn’t large enough to house the fragile works.

To counter this argument, Greece (and the EU) invested €130 million in a brand new Acropolis Museum designed to hold the sculptures, should they ever return to Athens. This large glass building, just 300 metres from the Parthenon, echoes the architecture of the monument, but at street level. The new building is exactly aligned with the original temple and it’s easy to see up to the ruin from within the museum’s glass walls.

It’s one of the finest archaeological museums I’ve visited in a long time. The display gently takes visitors through the history of the Acropolis and the various incarnations of the Parthenon, leading up to the moment when Lord Elgin’s men removed – somewhat forcefully – the sculptures from the temple. 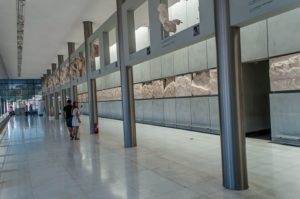 Without wanting to labour the point too much, the new museum displays what remains of the frieze in Athens in an exact size reproduction of the missing elements. Where sculptures aren’t present in the replica frieze, a small note informs the visitor that the original is in London at the British Museum (or elsewhere, as the BM is not the only place to house them). There’s no protest, no politics and no pushing the matter. The museum simply leaves us to question why the stones are missing and leaves us to form our own judgement.

Greece says that, contrary to historical claims, there’s an entire museum waiting for the sculptures. It should be noted that there are plenty of other points in the debate about the return of the sculptures which the British Museum and the UK Government continue to take part in to this day.

Back home I returned to The Portico to look again at Lawrence’s 19th century drawings of the sculptures. It’s clear that he was just as aware of the controversy of displaying these sculptures in Athens, in London or in Manchester as we are today. In his introduction he writes: “Controversial discussion, when conducted with candour and decorum, is the best spring to mental exertion, and materially assists the development of truth and knowledge, by exciting enquiry into the various systems that have arisen both in past and present times.”

Lawrence and his contemporaries were in awe of these sculptures and it’s easy to see why. Aside from the political sensitivities of where they should reside today, I’m struck every time I see them by the quality of the line and the finesse of the carving. They remain a touch point in the history of art, copied again and again across the world. And now I’ve been to where they started their journey, I’ll never look at them in the art gallery in quite the same way again.

Flights: Easyjet and Aegean both fly direct from Manchester to Athens. And the major European airlines are competitive with their one-stop flights. KLM, Air France and Lufthansa all offer reasonable connections at good prices.

Accommodation: I stayed at the modern Fresh Hotel in the heart of the city and close enough to where you’ll want to be as a tourist, but just far enough away from the overpriced nonsense. An appropriate balance of design and boutique elements, combined with affordability. The rooftop pool and bar have views of the Acropolis (of course) and are a great spot for a drink as the sun sets over the city in winter or summer.

Food: This is a city where it is not frowned up to eat kebab three times a day. Stop at any of the counters selling giros – grilled lamb, veg or chicken in a little flatbread with spiced sauce – and you’ll be rewarded with a treat for just a few euros. For something more substantial take a wander through the backstreets of Psiri – just be sure to dodge the tourist traps and head to the more traditional places. For fun drinks with the locals head to the bars around Keramaikos metro stop, or for a finely crafted martini in a design-led interior, head to The Clumsies.