Ups and Downs at the Macdonald Townhouse Brasserie

To the Macdonald Townhouse with the editor of Northern Soul to visit the hotel’s 101 Brasserie. It’s one of those lovely Manchester buildings with a hidden history and a modern reinvention. Part of the Macdonald hotel group, the Grade II-listed former cotton mill on Portland Street has recently undergone a £3.5 million makeover and boasts a 4 star AA award. But what is the food like?

The meal began well. It was good to see a description on the menu stating where the produce was sourced from and its Freedom Food pedigree. The brasserie’s commitment to sustainable food sources displayed their ethical colours and it augured well that their chefs prepare everything from fresh produce.

The provision of two wine menus was a nice touch (a basic drinks menu and a fuller version). This allowed people to look at what wines were available without having to tackle the entire list. I’ll admit, however, that I’m not keen on wines of the month, they tend to be bin-ends, unpopular wines or wines bought in bulk without any real attention paid. But, after chatting to our waiter about them and discovering that a previous choice was from Peter Lehmann, it became clear that this option could be a good choice. We weren’t disappointed.

We perused the compact, simple and well presented food menu while sitting in the bar area prior to our meal. A combination of crisp champagne and a trio of nibbles – mini tomato bread sticks, stone-in olives and the most beautiful smoked almonds I’ve ever tasted – launched us into the dining room nicely. I was a bit disappointed that the almonds weren’t prepared on site, but this was a minor quibble. 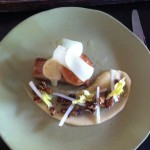 After dissecting the menu I decided on the belly pork with apple, celery and walnuts followed by the grass-fed lamb with peas, bacon and dauphinois potato, while the Ed opted for the John Ross smoked salmon with horseradish and cucumber (after being informed that John Ross supplies the Queen) followed by the 21 day Scottish rib eye steak with house sauce – a red wine jus. As sides we decided on buttered jersey royals, Carroll’s heritage potato chips and a rocket and parmesan salad. We were offered the option of the chef’s choice of wine for each course and so plumped for that.

As our starters arrived, the first wine was presented – Bishops Leap Sauvignon Blanc 2012 from Marlborough. The salmon was a surprise, thickly sliced as opposed to thin slivers, accompanied perfectly by fresh horseradish and delicious pickled cucumber. My pork belly was just as tasty. Even though I’m not a fan of celery, the fact it was pickled added a different flavour to the dish: beautiful. The wine match was a triumph, it complimented both dishes perfectly. A great choice by the chef.

Next, the main courses. Unfortunately, this is where it all went pear-shaped. The steak was over-cooked as was the lamb loin. I had asked for my lamb medium rare but the middle slices only just met this requirement, the rest was far too well done. The Ed asked for “medium but pink in the middle”. This is a chef’s nightmare, we prefer the correct terms. I interpreted it as medium rare but it was more medium well. The bacon, peas and dauphinois were beautiful but the jersey royals tasted and looked just like normal new potatoes and were undercooked. On a plus note, the wine (Malbec from Michel Torino of Argentina 2012) was a perfect match. 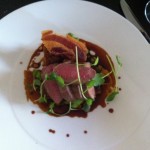 Onto the desserts. I chose the warm layer cake with carmel parfait and poached Williams pears while the Ed chose the rhubarb and apple crumble with warm custard and vanilla ice cream. The crumble was cold (not fridge cold but hardly heated) and a strange combo having both the custard and ice cream together. My layer cake was lovely but was over powered by the Williams pear which, as it turns out, was poached with saffron, a spice I’m not a fan of and certainly not in a dessert. The wine match was a Botrytis Semillion by Peter Lehmann of Australia 2011. I couldn’t fault it.

So an evening of ups and downs ended and, as we drove home, we were both a bit disappointed. The front of house couldn’t have done more to make us feel welcome, but the food was ultimately a let down. 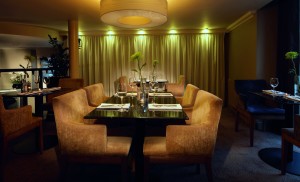 What: 101 Brasserie at the Macdonald Townhouse Hotel