One of Murray and Royle’s previous collaborations was with four-time BRIT Award winner Emeli Sandé who joined Prose for their track Head Sick after being introduced by London DJ and producer Naughty Boy, a long-term collaborator who signed Prose to his label after discovering them on YouTube. The full Empty Hands EP will be available in March 2019.

Prose drew a broad variety of comparisons in their early press coverage. They were described as a combination of down-to-earth U.K. hip-hop, similar to the The Streets or Plan B, and a touch of melodic lad rock that took its cues from fellow Mancunians Oasis. Their lyrical approach was inspired by life experience, often covering very personal subjects.

Prose released their debut album Home of The Brave which was well received across the U.K. and beyond. Playing sold out shows in different cities and supporting the likes of Emeli Sandé, JP Cooper, Professor Green, Naughty Boy and more. 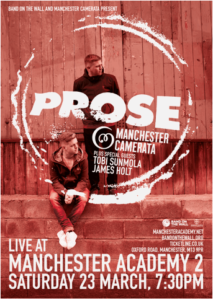 To be in with a chance of winning one of three pairs of tickets, all you have to do is sign up to the Northern Soul newsletter (details of how to do this are on the right-hand side of the page) and send an email to emma@northernsoul.me.uk with the title ‘Prose’.

Winners will be picked at random and notified by: March 6, 2019