Cathy Crabb April 17, 2019 Art, Arts Comments Off on Art, heritage and looking to the future: the Weavers Factory opens in Uppermill

Accomplishment isn’t a steady set of milestones for those committed to a life in art. It is a craggy trail over a beautiful and ever-changing landscape. To the successful artist, rejection letters are the crumbs that lead you back to your roots and the bread and butter that fuels the drive. Which is why, at the opening weekend of the Weavers Factory in Uppermill, I was so drawn to the piece Don’t Give Up by young designers Hasibul Nabil and Masum Choudhury as a testimony to artist Joan Charnley’s life and work.

“We wanted to use her rejection letters in animation,” says Choudhury. “We thought it would be an interesting angle.” 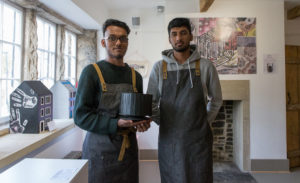 The Weavers Factory building benefits from polarity, previously a gambling den and then temperance hotel before becoming the home of textile and botanical artist Joan Charnley and her husband Archibald McDonald in 1963. Now the three-storey building, originally built as a weavers’ factory, has been lovingly transformed into a homage to Charnley’s life’s work. It was Charnley’s wish to turn her home into a gallery and art space to rival any in Greater Manchester. 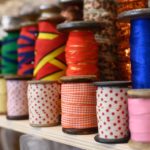 Curator and artist Julian Bovis and manager Nigel Durkan moved next door to Charnley in 2012 and so began a friendship that changed their lives. The space promises to show the work of emerging and established artists while also honouring Charnley and has been anticipated greatly by the local community. When I visited, they were two days in and already celebrated and welcomed by the wealth of creativity in the region.

With a gift shop, workshop, tea bar, garden and two galleries, there is much to enjoy in the Grade II listed building. Spaces are currently taken up with work by artists at Oldham College and Manchester School of Art, and illustrations of Saddleworth by artist John Hewitt who lives in the village. The plan is to launch a new art exhibition on the first weekend of every month. 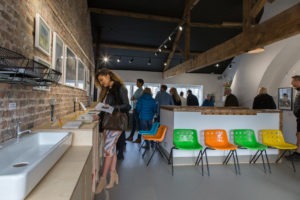 On the third floor, which will be the creative space for future art workshops, there is a display of Charney’s travel journals. You could spend a good couple of hours in there being inspired by her travels and gleaning an insight into her own inspirations. The journals are delicious archival treats, jammed with mementos, sketches, postcards and musings from places visited around the world.

Amy Mills, an Oldham College design student, has created the poster for the inaugural exhibition Cut Grass, Lavender & Chanel No. 5 which refers to the only three scents that Charnley could smell. This charming insight is indicative of the golden anecdotal thread throughout the art space. Weavers Factory, rooted firmly beneath the craggy landscape of Saddleworth, is a pedestal earned by an artist who gathered the finery of life’s fabric around her shoulders.