Caroline Steinbeis’s time is precious. I’ve been emailing back and forth for a few days, trying to secure a space in her schedule. Meanwhile, it’s possible I just mowed down several commuters in my greed to get off the train and back home to make the call.

“Let me just grab a bowl of food,” she says – rather calmly while I’m wheezing down the line after my rare display of athleticism – and the more we talk, the more it becomes apparent that Steinbeis is a woman with oodles of stamina and talent.

Caroline Steinbeis is fast becoming one of the most respected directors working on the stage today. Winner of the 2009 JMK Award for Young Directors, she runs her own company, Strike Ensemble, and her directorial credits include a critically acclaimed staging of Caryl Churchill’s Mad Forest, not to mention her attachment to the prestigious Royal Court in London.

Now she is directing Arthur Miller‘s devastating portrayal of the human cost of tyranny and vengeance, The Crucible, at Manchester’s Royal Exchange. 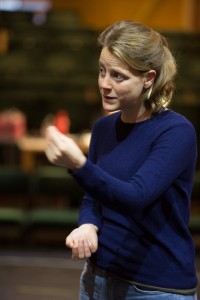 “The time in which we are making the show is very tight,” she explains. “And we are working with a huge company of people. The play demands you to be fully switched on all the time and that goes for everyone in the room, as much for our stage managers as for all of the actors. We’ve had a couple of people that have become very tired and I’ve managed to injure my shoulder but that comes with the territory.”

Last time Steinbeis was at the Exchange, she was directing the sell-out studio run of Alistair McDowell’s Brilliant Adventures in 2013. Now she’s occupying the main stage.

“It’s lovely to be back. It’s a big shift moving from the studio to the main space and I am really glad that they are giving me that chance.”

But why wouldn’t they? Steinbeis’s resume is extremely impressive. When I ask what she’s been up to in the few short years between shows in Manchester, she says: “I’ve been freelancing all over the place. I was working on a show last year at The Globe and at The National, making various different things. Also travelling abroad to make some work so it’s been a busy time.”

When quizzed further, she informs me that she’s been working in Ukraine. “I made a show in Kiev which was great fun. They showed me around and I went off exploring by myself as well which was full on because of all the street signs and I couldn’t read any of it. I was permanently getting lost.”

I can’t imagine Steinbeis getting lost – or worried for that matter.

With recent statistics showing that 14 per cent of directors are female, I wonder if being freelance in the business warrants, or instils, nerves of steel. 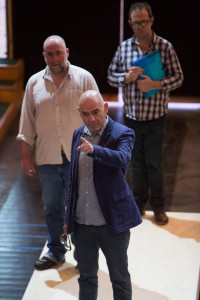 “There was definitely anxiety before starting [The Crucible],” she admits. “But I think that’s very normal. You have that before any challenge.

“The great thing about freelancing is that the job takes you all over the place but of course that’s also the challenge of it. You don’t really know where the next job is coming from. You’re very much at the mercy of other people asking for your input. The great thing about it is ultimately the decision is yours as to what direction you want to head in.”

Billed as a ‘pared-down’ version of Miller’s powerful depiction of intolerance and hysteria, I was intrigued to know what attracted Steinbeis to The Crucible, and why the decision was made to stage a contemporary production.

“The main question that we asked ourselves when thinking about the play was what is it about The Crucible that people can relate to now? The answer to that is that the whole thing feels incredibly relevant at the moment because the universal theme at the [play’s] true core is people acting out of fear. You only really need to look at the asylum crisis and issues in government at the moment and you understand how fear can be a motivator and so we’re not setting it in 1692, or the 50s when Miller wrote the play, but we’re setting it essentially as a warning rather than as a period piece. People will recognise themselves.”

Does she think that’s why The Crucible is so popular?

“I think that firstly the writing is completely impeccable and it’s very rare for theatre-makers to get presented with something that is so solid and reliable. You don’t often find that. The themes are so incredibly human and so easy to connect to.” 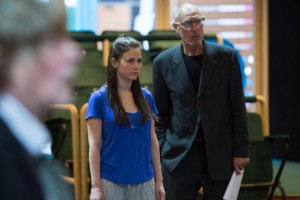 While new writing like Brilliant Adventures might be where Steinbeis has felt “more at home in the past ten years” she states that “going into something like The Crucible makes you see how amazing it is to unpack a play like this and how much depth there is to it and how carefully it’s put together”.

“It has to be one of the most well-made plays ever written and Miller really is an artist. He makes the process of understanding incredibly enjoyable because you just go deeper and deeper, and there’s so much in there.”

As plays go, The Crucible is pretty colossal. Does she feel like this is one of those big moments in her career?

“Making The Crucible is a huge deal. It’s a once-in-a-lifetime opportunity to make a show like this and so I do feel coming to the Exchange to make this is possibly one of the most important things I’ve done. But you can’t really quantify it like that because every show is so different and every person you’re working with and every text you’re looking at brings such different challenges. Having said that, this feels like it’s enormous.” 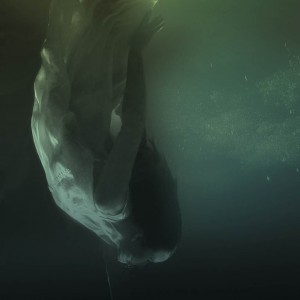