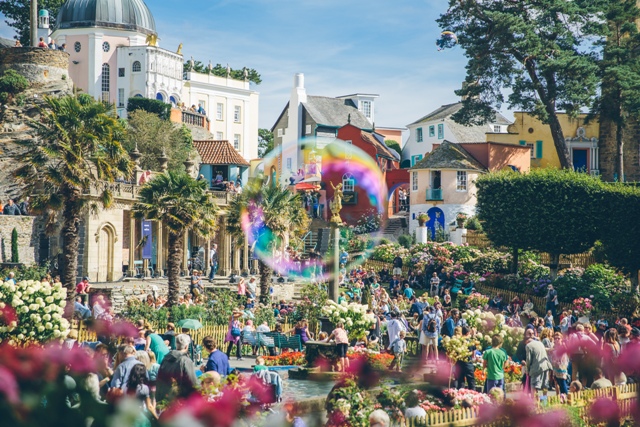 One of the most striking experiences about going to a festival is becoming part of a temporary community: a strange, bewitching pop-up village which will be dismantled come Monday teatime. In this respect, though, Festival No 6 has a head start. Portmeirion is a strange, bewitching village all year round. It really is a ridiculously, lip-smackingly pretty place. It was, of course, used for location filming for the classic TV series The Prisoner – but now, for one weekend every September, it becomes The Prisoner as populated chiefly by 20-year-olds in dalmation onesies. 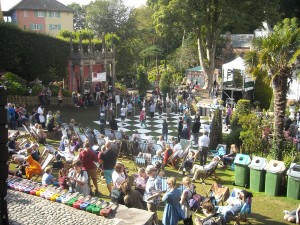 Portmeirion is too dinky for big stages so the festival is split over two areas. Off to the left there’s the Castell Park, a massive field containing the main music stage and its three smaller siblings, overlooked by the camping area; and off to the right, Portmeirion village itself, whose myriad curious nooks and crannies have been filled with arts and culture performance spaces, right down to the beach and up to the woods above. The sheer volume of delights on offer across the board is startling. To leave without cursing at least one scheduling clash, your tastes would have to be pretty narrow indeed.

Early in the weekend the weather see-saws but eventually comes good. Some punters spend their time frolicking in the village pool or sipping champagne cocktails from plastic glasses by the sands, which can be quite a culture shock if you associate festivals with developing a muddy crust and downing pints of Scrumpy. Indeed, the food available here is superior stuff, from mouth-watering stalls right up to pre-booked Michelin-starred scran. On the less glamorous side, the humble camping area is on quite a rake, and it’s almost possible to start feeling seasick on the walk to the Portaloos. 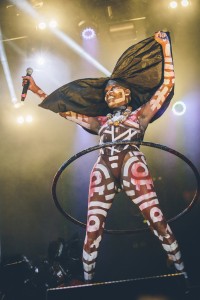 It’s plenty of fun just to wander round the site, exploring the various small stages in the woods – plus a dancefloor floating on a woodland pond complete with a full roster of DJs. Throughout the weekend there are a host of curious little performances which warm the soul, including an old-timer singing unaccompanied sea shanties, a duo delivering Welsh folk songs for soft vocals and harp, and a full male voice choir belting out Elbow’s One Day Like This.

On the petite Estuary Stage there are gently mind-expanding talks from the likes of Daisy Eris Campbell and John Higgs. On the Clough Stage, The Lovely Eggs‘ supercharged ‘Ramones with a Lancashire postcode’ shtick works particularly well live. Cosplaying Prisoner fans are rarely far away, chipping in good-naturedly with live recreations of the show’s memorable Human Chess scene, only occasionally glowering proprietorially at all the interlopers.

Overall, it’s striking just how many Manchester acts populate the No 6 bill. For a festival in North Wales there’s a lot of the NW in its DNA, taking in James, Black Grape, 808 State, Dutch Uncles, Everything Everything, Steve Coogan, Bernard Sumner, Mike Garry, Jane Weaver, the Unabombers and the Finders Keepers team. And this is no bad thing: it adds a particular flavour to the whole weekend. Also, scenes being what they are, you’re likely to spot at least one ex-member of The Fall in the crowd at any given time. 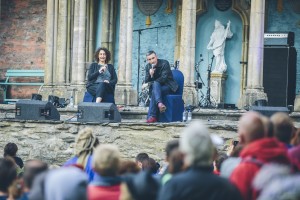 Coogan’s appearance is essentially an on-stage ‘in conversation’ event with writer Amy Raphael, albeit to a large and well-refreshed festival crowd at tea time. It could have gone horribly wrong – he’s heckled with shouts of ‘A-HA!’ throughout – but Coogan’s humour and honesty wins out. He reveals that he’s writing another film script with a view to directing it, and that a third series of The Trip is highly likely, assuming that all concerned can settle on an appropriate setting for it. He also names his starring role as Tony Wilson in 24 Hour Party People as ‘probably my favourite thing I’ve ever done’. Fittingly, then, Coogan’s appearance is appended by poet Mike Garry performing his new Tony Wilson tribute single St Anthony, which turns out to be an unexpectedly glorious, uplifting highlight. 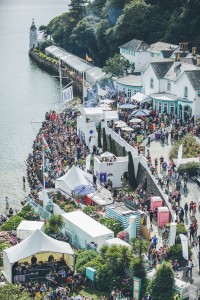 Bernard Sumner is on good form during his own ‘in conversation’ appearance, but his oppo Irvine Welsh’s curiously bland line of questioning hampers proceedings a bit. Over on the I stage, Jane Weaver presents swirling, groove-based songs from her recent break-out album The Silver Globe, some of which are a little so-so while others really achieve lift-off, the marvy Mission Desire in particular. Later, Everything Everything play to a huge, overspilling, adoring crowd. It’s spirited enough stuff and delivered with gusto, but caution is to be advised with a sound which teeters on the formulaic. Plus, one fretless bass run too far and you’re Kajagoogoo.

Curiously, the main Stage No 6 doesn’t feel like the beating heart of the festival. On Friday and Saturday it’s empty until 4pm. Even then, the acts showcased are a strange scatter-shot bunch, and overall it lacks the strong identity of many of the other stages and areas. From here, Metronomy end their Friday night set with an announcement that they’re going on hiatus but, to be honest, their somewhat one-dimensional sound has worn thin and fresh ideas couldn’t hurt. Catfish and the Bottlemen, performing on Saturday evening, might be local heroes, hailing as they do from nearby Llandudno, but they deliver only identikit indie-rock, the sort of songs which sound tailor-made to accompany trailers on BBC Three. Across the way at the same time, the Clough Stage, curated by Finders Keepers, hosts Fumaça Preta‘s unhinged Portuguese-language prog-metal, which is several times more outlandish and appealing. 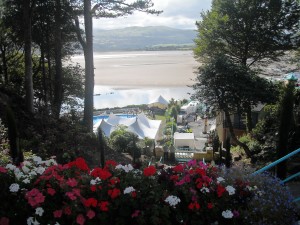 Later, thankfully, Belle and Sebastian pull the whole ‘festival headliner’ thing off with admirable accomplishment, which is all the more remarkable for those, this writer included, who first saw them play at Manchester Town Hall back in 1997 when they could barely keep it together to finish a single song without quietly collapsing. Nowadays they deploy projected backdrops and invite managed stage invasions from the audience. Their thoughtfully-sequenced set mixes new and old, and if it’s the older songs which tug the heartstrings the most, no matter: as a whole, it’s a nigh-on irresistible thrill.

On Sunday, the joyous, quietly adorable Stornoway manage to keep just this side of saccharine, even when they go right out on a limb with an entirely straight-faced cover of Yazz’s The Only Way is Up. Later, Grace Jones’s climactic set creates a genuine sense of anticipation. On-site whispers suggest that her backstage rider includes a request for 24 freshly-shucked oysters on a bed of ice on a silver platter – but not to eat, just to look at. Up on stage she dons a mirrorball hat for Love is the Drug and hula-hoops while singing Slave to the Rhythm. It’s marvellous stuff. ‘Iconoclastic’ doesn’t quite cover it. You just don’t get that with Muse. 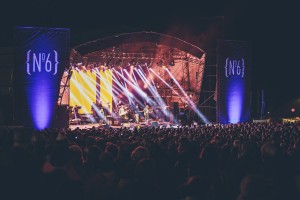 In only its fourth year, Festival No 6 has well and truly established itself as a festival of note. Certainly, it offers something for everyone. On balance, though, the arts and literature programme is probably more distinctive and enticing than the music line-up. In fact, there’s a bit of a disconnect between the arts going-on in the village itself and the music in the Castell Park. There’s nothing much that can be done about the geography of the site but it would be something if the two sides knitted together more in terms of programming and identity. Variety’s all well and good – it’s the lifeblood of any festival – but this feels almost like an out-and-out spilt personality. Some punters, one suspects, spend the whole weekend on one side or the other. And so much of the Festival No 6 experience is distinctive and appetising that any elements which feel borderline bland really stand out. It feels like a celebration of creativity and individuality, and yet it succeeds in this much more in some areas than in others. In the words of old Prisoner episode titles, Festival No 6 is truly a marvellous free for all: and yet, it’s all a bit schizoid, man. 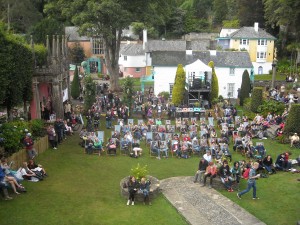