What is wrong with Manchester’s cycle routes?

Drew Savage December 5, 2014 Northern Soul writes... Comments Off on What is wrong with Manchester’s cycle routes? 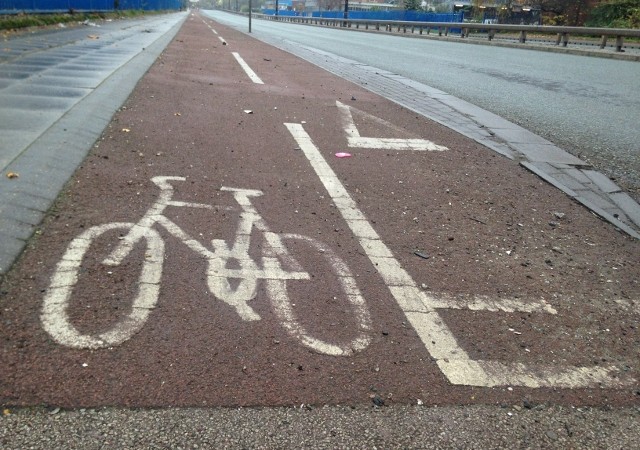 I’ve lived in Manchester for nearly three years, cycling to work nearly every day. Although very little will stop me from riding my various bikes, it’s a perpetually frustrating experience. Broadly speaking, the cycle routes inside the M60 are rubbish. Complete rubbish.

So many lanes have clearly been put in to tick some sort of box, to fulfil some sort of criteria, and have obviously not been designed by anyone who’s ever ridden a bicycle on a regular basis.

In some cases, all the authorities have done is make it legal to cycle on certain pavements, basically rendering cyclists a permitted nuisance to pedestrians which is pretty unsatisfactory to both parties. Then there’s the classic trick of whenever the route encounters some sort of hazard or obstacle, like a bus stop, they just stick up a sign that says ‘cyclists dismount’. This means that if you fail to get off and walk, it’s your fault if something bad happens. Or, on what’s technically a bike route by the side of the East Lancs Road, the paths are so bumpy and overgrown you can’t use them. 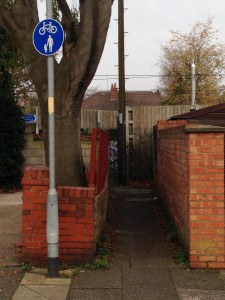 Around Trafford Park where there’s lots of room, and there are bike paths by almost every road, it should be better. Except they’re swept once in a blue moon and strewn with broken glass. Then there’s the farrago of Route 55 which links Didsbury and Chorlton with Salford Quays. It’s not too bad until you get to St Werburgh’s Road station. But then you’re sent down back alleys, onto the nearest available roads, and over some completely unsuitable surfaces – from St Werburgh’s to Chorlton it’s over bumpy paving slabs that will buckle your wheels if you ride over them regularly at anything but a snail’s pace. Oh, and the bit that links Chorlton to Firswood is down a cobbled alley, and around a right angle bend on a narrow path between two schools. As someone who only moved to Chorlton in 2012 I’d assumed this had been done as a diversion when the tram was built on the old railway line, but it turns out it was actually designed that way. Genius.

The tram’s great up to a point, and accessible by all. But you can wait for 15 minutes (or at least, until the Manchester Airport line opened), and by that time on a bike I’d be two thirds of the way from Chorlton to Piccadilly.

Before I made the move north, I cycled to work in London for ten years – and for all the capital’s faults, so many people cycle these days that most drivers at least expect you to be there. In Manchester this isn’t usually the case. And that’s what needs to change.

The other point worth making about London cyclists is that they cycle like idiots. Well, that’s a generalisation. Many of them do. This is partly because, back when I moved to London in 1998, cycling to work was a non-mainstream activity and there was scant help from the authorities. You were taking your life in your own hands. As a result, people began making their own minds up about which rules, laws and elements of the Highway Code they would follow (particularly the ones about red traffic lights and riding on the pavement).

If you treat people like outsiders, they operate outside the rules. QED.

And even now London is still playing catch-up. The capital is investing in cycle lanes and infrastructure but it’s too little, too late. Anyone starting to cycle in the capital does so by the law of the jungle, not the Highway Code.

I’ve got an extreme solution to that one. In the Caledonian sport of shinty, there’s a rule stipulating that any player who breaks one of the laws isn’t protected by any of the others. Apply this to bikes, and pedestrians could be legally entitled to deck anyone who rode on the pavement. Just think about it. If the NHS could refuse to treat someone who’d been hit by a car because they’d been riding at night in dark clothing and without proper lights, I reckon we could wipe out stupid or anti-social behaviour by cyclists overnight. 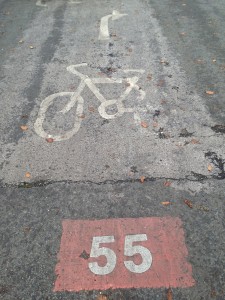 Or we could just try being sensible and grown up about it. In Holland they have proper cycling infrastructure, laws that protect cyclists (especially the one saying that any collision between a bike and a motor vehicle is the driver’s fault) and people ride to work in everyday street clothes. You don’t have to gird your loins with Lycra and hurtle about pretending to be Mark Cavendish.

In Manchester, with a less established cycle commuting culture, there’s a chance to go the Dutch way before we go the London way. But only if the authorities are willing to invest.

And there’s the problem. Former Olympic gold medallist Chris Boardman recently had a letter from the Prime Minister saying he was keen to get Britain cycling and wanted to spend £70 million to help it happen. Which is all well and good, but it only works out to £1 a head – in Denmark, they spend £30 a head.

Employers also need to play their part. The cost of installing showers and lockers in a workplace will be offset by the benefits of having a fitter, healthier workforce. And cycle parking is a lot cheaper to provide than car parking. However, before the BBC moved to Salford Quays from London, I went to a lot of planning meetings and asked questions about the provision of facilities for cyclists. Lo and behold, they underestimated the number of people who would cycle and every rack outside my office has four bicycles attached to it.

So what exactly is wrong with Manchester’s bike routes? Well, something I’ve noticed a lot recently is this: when a bike route is next to a main road, the main road has priority over all side roads which join it but the accompanying cycle path does not. Bikes are expected to stop at every intersection and give way. If traffic pulling out from side turnings has to give way to oncoming motor traffic, why not give way to pedestrians and bikes too? Trafford Wharf Road, one of the main access roads to Salford Quays which links the Imperial War Museum, ITV and the BBC to the city centre, is a case in point – there are so many entries to car parks and side turnings to negotiate that it’s pointless using the cycle path.

This has two main effects. Firstly, it tells cyclists that the authorities regard car drivers as being far more important than them. Secondly, it drives cyclists off cycle paths and back on the road; on Trafford Wharf Road, everyone rides on the main thoroughfare making the bike route a costly waste of pavement. The reason? Momentum is incredibly important to a cyclist. It takes a lot of effort to pedal your way from a standstill up to 20 mph and, once you’re there, the last thing in the world you want is to stop unnecessarily and have to do it all over again. This is why whoever thought this priority idea was suited for buses (which constantly stop and start and accelerate up to 30 mph in between) and bikes (which want to ride at a steady speed and – for most people this is somewhere between 12 and 25 mph – and avoid stopping at all costs) was being particularly clever. 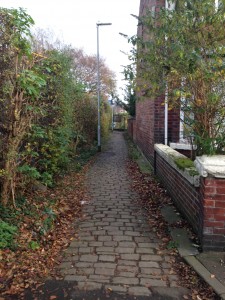 Oh, and thirdly, going up and down kerbs is really bad for bicycle wheels. Really, really bad. When a cycle route crosses a road, it’s almost impossible to ride that path without a bump of 1-2 cm up a kerb that could – and should – have been level. Since I moved to Manchester, my bill for having broken spokes replaced and buckled wheels fixed has gone through the roof.

I think most people’s criteria for a bike route is fairly uniform: a true, flat road surface that’s smooth, without bumps, potholes or kerbs. Ideally pedestrians won’t be wandering into it thinking it’s just a nice clear bit of pavement. Ideally it’ll have the same priority over side turnings as the road next to it. And it would be nice if it was protected from cars and lorries in some way, and if all our wishes could be granted it’d be nice if we didn’t have to share it with buses either.

I’ve racked my brains to try and find something that fulfils all these criteria and the best I can manage is the Fallowfield Loop. This is a Tarmac-surfaced route running along an old railway line from Chorlton through Fallowfield and out east towards Denton. It’s great but it is – quite rightly – shared with walkers. Everyone seems to get on fairly well most of the time. But beyond that, I’m struggling to think of anywhere that ticks all the boxes.

The provision for bikes in Trafford Park ought to make it a cycling utopia. Take Tenax Road, for example (the top image). Wide purpose-built segregated cycle paths on either side of a dual carriageway, with a separate pavement for pedestrians and everything. But it isn’t, for two reasons.

Firstly, they don’t have sufficient priority. For it to be an effective and popular alternative to riding on the street, a cycle path should be as fast an option as the adjoining road. But as soon as a bike route reaches a road junction, cyclists become second or even third-class citizens. Roundabouts in Trafford Park are car-dominated environments, and the only option offered if you’re using the cycle path is to scuttle sideways and wait for a gap in the traffic to cross what is effectively a slip road to a dual carriageway with traffic moving at 40 mph. Thanks, but I reckon it’s probably safer to share a space with the cars and take my chances on the roundabout – at least I’ve got equal rights if I do.

Secondly – and far more importantly – lack of upkeep and maintenance means you’d be foolish to actually ride on the cycle path along Tenax Road, and many others in Trafford Park. I’m guessing these routes exist because some sort of legislation forced the council to put them in. Unfortunately, once they’re there, there’s nothing compelling the authorities to look after them properly. They’re so strewn with litter, gravel, and shards of glass that you’d be daft to use them – it’d be risky even on a mountain bike with thick tyres. 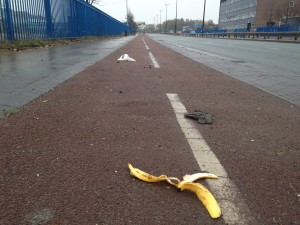 Anyone venturing up Oxford Road as far as St Peter’s Square will have to fend for themselves if they want to go anywhere after that. Manchester city centre is particularly difficult for bikes. There needs to be at least one good east-west route established, as well as a north-south one.

But as long as the council doesn’t somehow muck up the execution of building or looking after the cycle routes along Oxford Road – most likely with kerbs that aren’t completely lowered so they buckle your wheels – then at least cycling in Manchester looks like it might finally be moving in the right direction.

Words and images by Drew Savage