You can tell a lot about a city’s self-image by looking at the pictures on sale in its gift shops.

Thirty years ago, when I first began sketching out my own mental map of an unfamiliar Sheffield – divining its secrets via naive psychogeographic explorations well beyond school and shopping precinct – the city portraits that set tills ringing tended to teem with pre- and post-war life. At a time when I was venturing beyond the leafy Betjeman-blessed enclaves to the west of the city and gazing slack-jawed at scenes of industrial dereliction in the east, prints by celebrated locals like Joe Scarborough and George Cunningham sought to wipe away recession and the Blitz. Instead, their paint had the power to bring dead pubs back to life, to return light to long dark theatres, and to carpet cobbled streets with manual labourers all gainfully employed.

On leaving the Picturing Sheffield exhibition at the city’s Millennium Gallery last weekend, I exited through the gift shop. Now the racks bend under the weight of pictorial concrete; the city’s new favourite subjects are post-war social housing schemes and other lost landmarks. By the 80s, when these behemoths were on their last legs – making the pages of the press only when someone chucked a TV off the top deck – nobody wanted their images on a tea towel. Now though, you can eat your dinner off a Park Hill plate if you so choose, then wash it down with a cooling-tower full of tea.

This appears at first like a startling shift in taste. But given that most of these buildings have already passed into history, it seems that our new-found love of modernism’s most uncompromising icons remains deeply nostalgic. Now we want to embrace the Sheffield that for so long we tried to ignore – the one that visitors spotted the moment they stepped off the train, but that we tried to hide as we sped them to the Peak District National Park.

Early paintings in the exhibition are of largely topographical interest. Amid the rolling hills and expansive farmland of View of Sheffield from Sharrow Moor (circa 1838), it’s possible to pick out the Botanical Gardens’ glasshouses, still standing today after full renovation a decade ago. If the rural landscape proves to be beyond our present-day imagining, at least this feature helps us get our bearings: “Tesco’s about there,” proclaims a passing dad as he points at some foliage, and beams at his uncomprehending son.

Although the exhibition is determinedly non-linear, the creep of the city’s darkening soul is inescapable. As the Victorians choked the landscape and unleashed its fiery magic, the images grow dense with habitation and industry. And by the time we reach the middle of the 20th century, the dominant narrative is established: Sheffield is ugly-beautiful – an acquired taste, like tripe. Never mind that the city boasts some of the most stunning suburban districts of any city in Britain; its artists were more entranced by its terrible beauty, the kind you couldn’t stick on a chocolate box.

Terry Lee’s Sheffield Landscape of 1960 is a scrubbed tumble of houses that seem to quiver and boil away into steam. That this ‘steam’ is more likely to be a shroud of smoke is clear from Bill Brandt’s adjacent photograph: his Misty Evening in Sheffield, with its hunger march of silhouetted chimneys, is softened by the play of light on smog, not mist. The photograph dates from 1937, the same year as Orwell’s The Road to Wigan Pier, which includes this vivid Sheffield recollection: “Once I halted in the street and counted the factory chimneys I could see; there were 33 of them, but there would have been far more if the air had not been obscured by smoke.”

The Sheffield that Orwell saw seems to finally expire in Derrick Greaves’s harrowing Sheffield. Its horror doesn’t stem from a human tragedy; as with most pictures in this exhibition, people don’t feature at all. Rather, this is the death of a physical landscape. With a sky like an H-block dirty protest, an exposed rib-cage of slum housing and a stranded factory rotting like a dead man’s skull, the glint in the city’s eye has burnt out.

There was only one way out after this, and that was via the utopian dreams of the post-war planners. But the segment dealing with this period is also the darkest. Mostly consisting of photographs and paintings from the 70s and 80s, this is the city that the planners were meant to have saved. Pete Clarke’s Kelvin Flats: Portrait (1985) is thick with filthy oil paint, and though it’s a rare example (for this exhibition) of a picture with a real individual at its heart, the subject’s humanity seems to cling on despite his surroundings, not because of them. 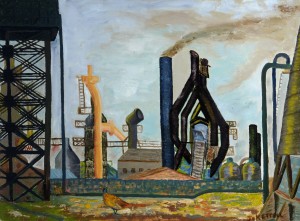 And now we rebuild these lost kingdoms – or at least, we buy pictures of them, and construct them again in our minds. It used to be done with prints of inter-war Sheffield dancehalls glowing like the Folies Bergère. Now we go glassy-eyed over Jonathan Wilkinson’s The Egg Box, a precision-built drawing of a building which lasted only 25 years, or Pete McKee’s cartoon portrayals of the Hole in the Road (excavated in 1967, filled in again by 1994).

I now live in Liverpool and work in Manchester, both cities that have long excelled at civic grandeur. Viewed in these terms, Sheffield’s riches are modest. But when it comes to the beauty of its physical setting, Sheffield leaves both standing. It’s fascinating that on the strength of this absorbing show, the story of the city’s artistic representation has involved a flight away from this self-evident splendour, towards ugliness. Perhaps it’s because those glorious valleys and vistas are the beauties we were born with, whereas the concrete visions were what we dreamt up and built.

Park Hill flats remain of course, now Grade II* listed, and they appear several times in this show. Only a couple of months ago, one of Mandy Payne’s Park Hill views – aerosoled onto a small slab of concrete, like the politest graffiti – made the John Moores Painting Prize shortlist, indicating that this urge to find loveliness in yesterday’s dreams reaches well beyond Sheffield, running like rebar through contemporary culture. But in Sheffield, Park Hill now carries the weight of remembrance on its concrete decks, standing for all those short-lived landmarks now departed.

And it’s a heavy burden to bear. Because like all great spurned loves, now that those other buildings are gone, Picturing Sheffield and its Millennium Gallery gift shop would suggest that maybe, we want them all back.