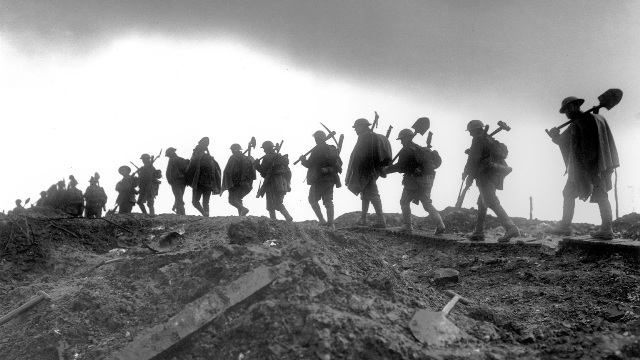 One of the saddest things I’ve ever seen was a group of young squaddies queuing in a motorway service station, clearly excited about their journey, buying their crisps and pop. They could have been going to the Gulf but they looked like they were on a school trip to Alton Towers. I can easily say I don’t know anything about a soldier’s frame of mind preceding or during combat. But I can relate completely to reflections of combat and battle which help us look at and understand what has happened, as well as celebrating the good things that have come from war – like the beloved NHS and the rise of the female workforce.

But medals in cabinets leave me cold. I fail to see how a medal is a fair swap for the atrocities a soldier has witnessed or been party to, and I can’t form a concrete image as to what journey that medal represents. It isn’t compensation for a life lost to me; it is blood galvanised.

Alas, somewhere between making fire and moisturising, a game of soldiers between some posh kids became a world-wide game of ‘one hand strangles the other’ and it bothers me. So, with this feeling in mind, I came across Wilfred Owen‘s draft of Dulce Et Decorum Est at The Imperial War Museum in Salford. Unlike some other displays of war memorabilia I’ve seen, the setting really worked – it sat behind glass, just there among other letters from various writers and painters.

The power of the poem hit me like a truck. I felt gutted. I don’t say gutted lightly. I know what it means to feel truly gutted. It feels like someone has sliced you open and your insides are waterfalling out of you. It feels like you have just dropped down a man hole and are beginning to think there is no bottom. Words can only do so much. If you had seen what I have seen you would understand me. If I had seen what you have seen, I’d know you do. We have poets to bridge our gap.

In terms of the power of poetry in promoting anti-war sentiment, Wilfred Owen spoke from his guts. I admire Boy George’s no nonsense approach but people need to be shown, to experience, to understand Lest We Forget. And ‘War is stupid, and people are stupid’ just doesn’t have the resonance of ‘Dulce Et Decorum Est‘.

Owen’s poem whips you with an imagery-laden banner that says in its simplest terms and with a quivering stiff upper lip – ‘if you had seen what I have seen you would never encourage children that it is right and proper to go to war’. I am so grateful to Wilfred Owen that he committed to paper something that has meant so much to me, and I feel so privileged to be able to go to the Imperial War Museum North and see that poem in its early process. To actually look at how Owen crossed out sentences with less impact and chose stronger words – not for flowery multi-syllabic frills or tricksy metaphor but, as you can see if you go, to give the reader the greatest chance at understanding how terrible war is. That instead of the power of articulation being used to rally those who admire and fear language to do the bidding of the power-crazed, it turns that same propaganda on those who yield it and says:  ‘Do not listen to those grand words mothers, do not send your boys to war, use those white feathers to soften your nest and look to this man here, this man choking in a deadly sea of gas to know you are doing the right thing. Hold their hand when they cross the road, wipe their faces with your handkerchief; a medal is no substitute for a life. They are telling you lies.’

I am going back again and again to the Street To Trench exhibition because there is so much to experience from it. I would challenge anyone not to be as moved as I was, looking at that poem in a cabinet with the scribblings out and additions, trying to help us, to warn us, and to keep us safe.

Images courtesy of the IWMN. Main image shows a working party of the Manchester Regiment moving up to the trenches near Serre in France, January 1917. 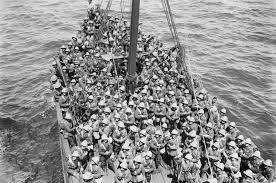 From Street To Trench is at the Imperial War Museum in Salford until May 31, 2015