Tucked away on the outskirts of Bury town centre sits a converted mill housing a unique gaming experience.

Arcade Club is the largest collection of working, retro arcade machines in Europe, and contains a vast array of cabinets guaranteed to elicit a gasp from even the most hardened of souls. Better still, the one-off entry fee (£10 for adults, a fiver for kids) means the need to waddle from one machine to the next, pockets bulging with ten pence pieces, is an inconvenience consigned to history.

Speaking of distant memories, upon admission the first thing that hit me was the authentic smell. Instantly recognisable and beloved by anyone who used to frequent their local arcade in the 80s, this indefinable aroma – part cabinet wood, electrics, warm plastic and junk food – immediately brought on a huge rush of nostalgia.

Transported back more years than I care to admit, I wandered the maze of cabinets with a silly grin spreading across my face. This collection housed a large part of my childhood, boasting an incredible range of titles from R-Type, Star Wars, Operation Wolf and Ghouls and Ghosts through to Chase HQ, Afterburner, Outrun and Street Fighter. To be fair, the complete list would fill the word count of two articles, so let’s just say, if you remember it, it’s probably sitting at Arcade Club waiting to be played. 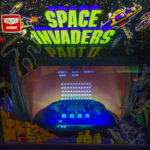 Eventually I arrived at the game which devoured the largest portion of my pocket money as a kid – a full, four-player cabinet of Teenage Mutant Ninja Turtles. With 25-year-old muscle memory kicking in, I marvelled at the mint condition of the entire display. Without doubt, such loving restoration is an integral part of what makes this an exceptional experience.

Indeed, there’s no doubting the passion involved in the project, a zeal which filters down from one man, founder Andy Palmer. Palmer is more curator than businessman and, while there’s no doubting his entrepreneurial spirit, Arcade Club originates from a desire to open his collection for the public to enjoy. Palmer’s enthusiasm is embodied not only by the friendly and helpful staff, but the patrons who, on this Friday Over 18s night, are lapping up the experience and creating a real party atmosphere.

One first-time visitor told me he was “in heaven”, and suggested he would have to be “dragged out at the end of the night”. Another balanced his bottle of beer delicately on a cabinet and waxed lyrical about the joy of finding a place where you can relax and have a good time playing games, suggesting the whole experience was “like going to a nightclub for giant nerds”. 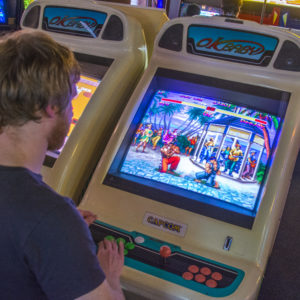 And while Arcade Club provides us old gamers with a retro hit like no other, further investigation reveals this nerd-varna contains something for everyone. The relatively new Floor 2 opened back in February, and is a stunning bolt-on to the main experience (although you’ll need to have an extra fiver handy to enter). Lit in a futuristic blue, this level houses high spec PCs, a pinball lounge, every games console under the sun (including a Nintendo Switch connected to a truly huge screen), an array of rhythm games, and a VR experience worth the admission price alone. Among all the cutting-edge tech, I also witnessed a couple playing Connect 4 in one corner, and comfy sofas scattered about where people lounged to have a natter and a drink.

Understandably, I headed straight to the cordoned-off zone to give the VR (Virtual Reality for those still struggling to set the clocks on their VCRs) a whirl. After a short wait spent chuckling at the previous incumbent wafting his arms and head around like C3PO on a trip, I was strapped into a headset.

Tonight, the much vaunted Oculus Rift system was hooked up to a shooter called Raw Data, which pitted me against wave after wave of psychotic robots. A member of staff, acting as a very real guide with a good sense for the theatrical, oriented me in this new world before letting me loose, wielding my triggers like an uncoordinated Clint Eastwood. Any last vestiges of macho gunslinging were swept away as I emitted a squeal upon close contact with one of the mad androids, signalling the end of my first venture into VR.

After staggering happily away from this experience, I decided to up my masculinity quota by challenging Northern Soul photographer, Drew Wilby, to a quick Mario Kart race on the huge screen at the other end of the room.

As Northern Soul Gaming Editor, it was obviously important to display my racing chops – my skills in evidence as, cheering, I crossed the line first. However, celebrations were short-lived as I realised I had, in fact, been watching Drew’s kart the entire time while my princess character spun round in a circle for five minutes. Now that’s how you make a splash at Arcade Club.

After informing Drew he had outstayed his welcome and nobody liked a show-off, I headed back up to the retro floor and immersed myself in a few more of my childhood favourites. 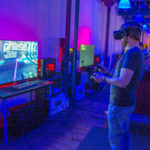 It was at this point, after experiencing the juxtaposition of old and new, that I realised you can’t put a price on playing games in their intended setting, whether that’s hurtling round Power Drift’s mind-bending race courses using steering wheels and pedals, or sitting in a cabinet of the original Star Wars vector game, replete with joystick, careening down the Death Star trench. It’s that physicality which no emulator can, well, emulate.

With Palmer’s next project a ground floor expansion to house the largest cabinets in his collection, Arcade Club will only increase this kinetic energy, as it continues to grow in both size and reputation.

Without doubt, this is an experience I will be returning to regularly, having already planned a trip with my friend’s kids. Thanks to Palmer and his team’s dedication, this club has kept alive the arcade experience for new (and old) generations to enjoy.