Brian W. Lavery, author of The Headscarf Revolutionaries: Lillian Bilocca and the Hull Triple Trawler Disaster, writes for Northern Soul about a series of small quirks of fate which, across the decades, led him to write the story of a remarkable woman.

The first and only time I saw Lily Bilocca lasted no more than five seconds. It was shortly after my first ‘death knock’- the awful description given by reporters to describe going to a bereaved person’s home. In this case it was a young fisherman’s mother. The boy had died at sea. This was some 30 years or so ago and to my shame I can’t remember all the details. But I do recall that it was all approached with respect and care. Over the decades, my newspaper, the Hull Daily Mail, had covered all too many such stories from the city’s Hessle Road fishing community. I also remember being briefed by my news editor to be non-intrusive and respectful. “You’re an ambassador for the paper, as well as a reporter,” was the rather noble instruction.

I was 21-years-old and had not yet completed a year in newspapers but I fancied I looked the part in my beige belted mac from a pocket of which protruded my conspicuous notebook. With the collar turned up against the sleet, I felt like quite the ace reporter – the sort Damon Runyon wrote about. In fact I was just a nervous kid in a stupid posey coat.

In the passenger seat of the Mini Metro driven by a snapper 40 years my senior my nerves were assuaged – in part. “Don’t worry kid,” he said, from the side of his mouth without a fag. “They’ll have everything ready for you when we get there. It’s like a tribute to their kid. Trust me, they’ll have it all, from his school swimming badges to his photo from the mantelpiece. They expect us to come round. I have even known families years ago when the fishing was big, phoning the news desk and demanding a reporter was sent round. It’s like a tradition.”

We parked outside the little two-up, two-down and the photographer gave me a further final piece of free advice. “Remember kid, if she gets the family album out make sure you take it with you. Don’t leave it for the next guy to pick up. Just tell her you need to take them all so the picture desk can pick the best one for the tribute.”

He went on: “I’ll get my pic and you bring me the album after you’ve done your chat. I’ll be in Rayner’s having a vodka. It doesn’t show up on the breath, you know.” (that unwitting advice came in handy in later years…)

I knocked on the door. It was answered by a little boy of about three years of age. On his upper lip was a little green Hitler-like snot moustache. All he had on was a vest.

“Can I speak with your mummy, please? Is she in?”

“I’m from the Hull Daily Mail,” I added like an idiot, as if an infant would know what that meant.

With that, the little kid screeched at the top of his voice. “Mam, there’s a mister from the ’ull Daily Mail ’ere!” Once inside the snapper got his head and shoulders photo of the bereaved mother and left me to get on with the interview.

It was about an hour later when I arrived at Rayner’s – the fishermen’s pub. Or more accurately the now-unemployed fishermen’s pub (the industry was all but finished by then -1980 – which added to the tragedy of the dead boy whose mother had, as my colleague predicted, given fulsome tribute to her teenage boy).

The photographer was at a table in the bar. I pulled up a stool and took a family photo album from under my coat. It was with a significantly steadier hand that the seasoned snapper flicked through the album. “Well done, kid,” he said. “You’ve played a blinder.” I watched him neck another large vodka while I sipped a Coke (not because I was abstemious, I was simply scared of getting caught, after all it was not yet one o’clock).

As we left the photographer nodded over to a woman sat by the door. She was a big lady. In front of her was a small bottle of stout. She looked pre-occupied. “Hi-ya, Lil”, he said.

“Oh hi-ya love,” she replied. Her thick dark beehive style hair protruded from her head scarf. I didn’t say anything but stared at her as we left. 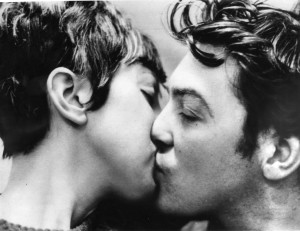 “That’s big Lily Bilocca, kid,” said the snapper. “She’s the dame that fought the trawler bosses back in ’68. She’s a right character.”

On the way back to the office I was regaled with tales of the fishwives’ uprising which followed the Triple Trawler Disaster. I learned how 58 men had died and how the sole survivor, Harry Eddom, fought for his life in the Arctic and came home a hero. Yet throughout the vodka-fuelled history lesson all I could think was, ‘that Lily woman looks like my mother’.

Nearly a decade passed before I heard about Lily again.

I was freelance now – and had been so for a few months. My tiny office in Hull’s Old Town was sparse. My new hi-tech fax machine took pride of place on the window ledge. There was a desk, two chairs, and a green slimfone. All state-of-the art for 1988. A grey Phillips mobile phone the size of a house brick lay silent (as usual) on my desk, next to the Olivetti portable I’d owned since my teenage years. The ‘mobile’ phone, which looked like something Rommel took into his tank, hadn’t rang since I bought it, unless you count the times I called some friends to ask them to test it. It was great for court reports in a hurry though. And, who knows, these things might catch on?

The first edition of the new-look tabloid Hull Daily Mail lay on the desk and a photo of my mother’s lookalike stared out from the single column on the right hand side of the front page. Above the image was a headline announcing Lily Bilocca, aka Big Lil, the Hull trawler safety campaigner, had died in hospital the previous day. It was while reading the paper that the slimfone rang. 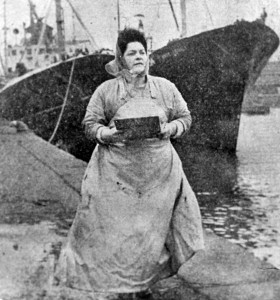 In the few weeks that I’d been freelance, pals from my previous job had played a few practical jokes on me. They’d call me pretending to be an angry reader or a potential interviewee. Thankfully, when The Times obituary desk editor with the cut-glass accent called I resisted the temptation to tell him to piss off. Something told me he was the real deal. If I hadn’t have come to that conclusion, then I might never have told Lily’s story.

Having been commissioned to write her obituary, I set about finding out all I could about the legendary battling fishwife. I had the added advantage of being able to call Stuart Russell who had covered the original story and gave generously of his time to help a young reporter, as he had done hundreds of times before and would do hundreds of times again.

With a keenness that is common in young reporters I sent hundreds of words of obituary via The Times’ copytaker. The constant tutting and intakes of breath should have told me that perhaps my story was overwritten. I was at the newsagent’s early doors next morning and could hardly wait to see my first story in a posh paper. Five pars! That was all they had given it. I was crestfallen and remember thinking, ‘she deserves more than that’.

But the incredible story from 1968, the uprising that changed maritime law forever, the amazing courage and leadership of Lillian Bilocca and the tragedy of how her own community was to turn against her, coupled with the amazing tale of Harry Eddom, stuck with me. I promised myself that one day I would tell the full story.

But as John Lennon famously said, “life is what happens when you are busy making other plans”. 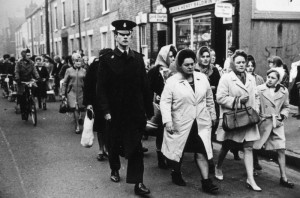 In 2008, after more than 25 years in journalism, I decided to go back to university. I wanted a change – a third act to my play. By 2011, I was a graduate (BA, first class, joint honours) and was looking to do an English Literature PhD. I was on my way to discuss a potential doctoral thesis with one of my lecturers when I spotted the newly-appointed Professor of Creative Writing. He was talking to a colleague. My years in newspapers mean I listen into conversations as a matter of course. I overheard the professor say to his colleague that he was keen to supervise a student who could put forward a creative non-fiction thesis that was relevant to Hull. I decided right then to change my PhD proposal, make an appointment with the professor and tell him the story of Lily.

The rest is history or, more accurately, historical creative non-fiction.

Thank you to the Hull Daily Mail for permission to use their images.

The Headscarf Revolutionaries: Lillian Bilocca and the Hull Triple Trawler Disaster by Brian W. Lavery (Barbican Press) is on general release and can be ordered from Amazon, Waterstones and other outlets. A Kindle version is also available.