“I am currently quietly eating an almond slice in Coventry with my notepad.” Tim Key chats to Northern Soul

Andy Murray May 30, 2018 Arts, Comedy, Northern Electric, Northern Soul writes... Comments Off on “I am currently quietly eating an almond slice in Coventry with my notepad.” Tim Key chats to Northern Soul 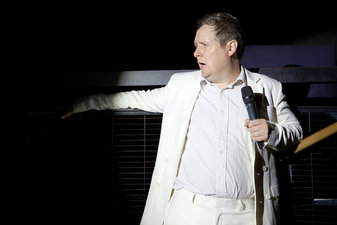 You know Tim Key, even if you think you don’t. If you have any interest in British comedy and a pulse, you’re bound to have spotted him in Detectorists, Peep Show, Inside No 9, Saxondale, Alan Partridge or as himself on Newswipe. You may have heard his marvellous Late Night Poetry Programme on Radio 4, one of the medium’s great hidden gems, or his idiosyncratic documentaries on aspects of Russian culture.

If you’re really lucky you’ll have seen one of Key’s extraordinary live shows. If not, it’s a tricky experience to describe. Recently this writer saw Key’s current show, Megadate, at the Manchester Dancehouse. It’s the remarkable tale of a would-be romantic night out in London and its aftermath. There are poetry and jokes, but Key’s no more a mere ‘comic poet’ than Donald Trump is simply a keen golfer.

Northern Soul spoke to Key while he was in the midst of the Megadate tour.

NS: You seem to have a genuine soft spot for The Dancehouse – or do you say that to all the venues? You certainly know how to zip around between its nooks and crannies.

TK: Good observation. I do like it there. Gary runs a tight ship, they have a legendary bar; nooks and crannies, a man called Rat and impeccable sight lines. They co-exist with a ballet school and there’s a great vibe in the auditorium. I love it there. Also, I do say that to all the other venues. 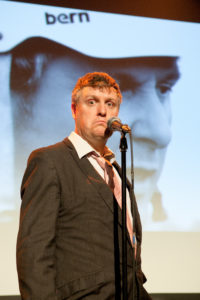 Obviously, your show isn’t autobiographical as such, but is it all complete invention? How much of you is tucked away in there somewhere?

That’s an amazingly intrusive question. I don’t think I’d be able to completely invent that. Actually, I probably could. But no, I had some stuff to work with from real life. Some. I think most comedians have a bit of source material floating around. I augment it heavily with poems about apple trees and falsehoods about my mother.

You often work closely alongside other people such as Tom Basden and Steve Coogan. How is that different to working on a one-man show like this? Is doing a show purer? Liberating? Lonely?

I mean, firstly working with Tom Basden isn’t the same as working with Steve Coogan per se, they are very different beasts. But working with the each of those – to be fair – talented men is very different from the bleak vortex of working alone. I am currently quietly eating an almond slice in Coventry with my notepad, for example. Collaborating is more fun, and I’m lucky to have a few long-term people I plug away with. But you sort of have to retreat into your shell and make something that’s totally your own sometimes. That said, I’m almost as proud of the stuff I’ve made with friends as I am about the stuff where I’ve gone through absolute hell on my own trying to make.

And can acting roles in shows that you haven’t written ever be as rewarding as a one-man show?

Mm. They’re different. Last year I did a play – Art by Yasmina Reza – which was absolutely horrific in terms of how far I was from my comfort zone etc. But it was probably precisely because it was so horrific that it was incredibly rewarding. It’s all risk and reward. But there’s something satisfying about a one-man stage show. It’s gladiatorial, you’re naked, it’s all down to you. Miserable really. 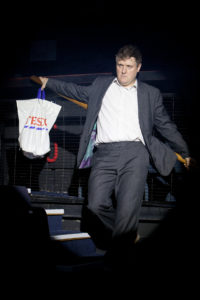 Tim Key’s Late Night Poetry Programme with Tom Basden is a joy, and it seems to share a lot of DNA with your 2010 album Tim Key With a String Quartet on a Boat. Did the album inspire the show? And do you plan to do any more Poetry Programmes?

Um, can’t remember which came first, I think maybe the radio pilot came before that bloody boat. Again, it’s one of my favourite things, the radio. Good combination of maddening writing on my own but then the release of working with friends when we record it. Basden again obviously, and Katy Wix, and then finding other gems to guest in it. There are plans for more in my head. Just need to check Radio 4’s head.

Did you ever write – for want of a less crap term – ‘serious’ poetry? Have you got a drawer full of your earnest adolescent juvenilia?

No. I can’t. It comes out like it does, rightly or wrongly. But I did write a poem for Basden’s wedding to the imperious Megan. That, at least, wasn’t completely frivolous. But actually, I reread it recently and I don’t think it was quite what it needed to be. Toucans everywhere etc. Poor old Basmos, deserved more really.

Where does your love of Russian culture come from?

Well, amazingly I lived in Kiev when I was 18. God knows why but there I was. Anyway, I kind of got the bug for stuff from that neck of the woods. Changed my degree, studied Russian and now it’s all just residually there. There’s always a bit of Russian music or lingo in my live shows. This one is riddled with Tariverdiev, a composer from some century or other.

When people come to see your shows for the first time, where do they tend to know you from? Your live reputation, your radio stuff, Screen Wipe, Alan Partridge..?

That varies wildly. Weirdly, right now I’ve had about three Peep Shows in a row. It happens more when that specific thing is repeated or something. I like it when people go for the radio approach, but really you get what you’re given. 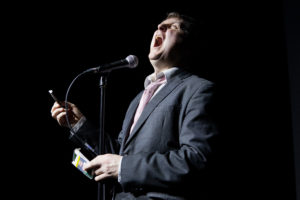 Before your show starts, you roam the stage clocking the audience members as they come in. What’s the thinking behind that?

Mm, I do do that. I’ve always done it, I think it’s so some barriers are knocked down right from the get-go. ‘We’re all in on this, let’s make the best of it’, kind of thing. Backstage is a pretty miserable old place anyway, I’d rather get out into the coliseum. Get my entrance out of the way early. Like these people who just jump in the sea straight away without dunking their toes in it and shivering.

Finally, what would you say audiences can expect when they come to see Megadate?

Well I’ll obviously undersell it, so you might need to augment this answer. But I’d say there’s some poems floating about, some filmed vignettes, some shouting, some Kronenberg, some talking about dating and the occasional lighting change. Pathetic, really.

To which we’d add, ‘pathetic’ be blowed. Key belongs in the first rank of today’s British stand-ups. More Megadate dates, including a return to the Dancehouse, are to come and you’re advised to make every effort to be at one.

Tim Key’s Megadate is touring until the end of June with dates including Hull, Lancaster, Manchester, Sheffield, Liverpool and Newcastle. For more information, click here.

Watch Key’s new comedy short Wonderdate, which crosses over with the show.