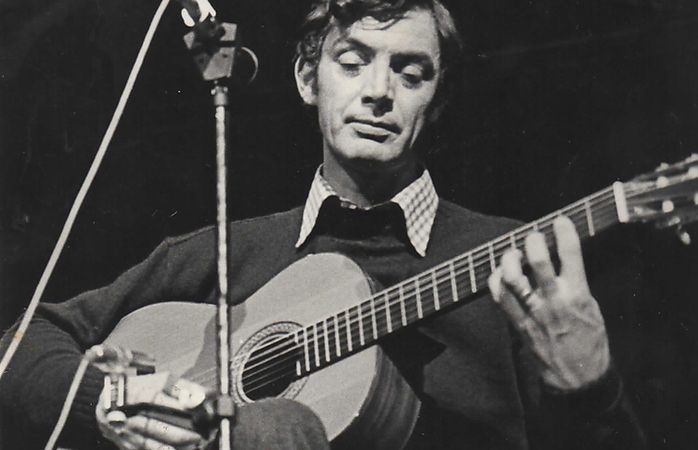 Would that he was still with us, Jake Thackray would have turned 80 on February 27 this year. In some circles his name still conjures admiration and profound affection. Frankly, though, a man so talented deserves to be much more widely known – and, considering the degree to which he was in the public eye, it’s rather surprising that he isn’t.

Born in the Leeds district of Kirkstall in 1938, Thackray was an intelligent, left-leaning Jesuit boy who went on to study Modern Languages at Durham University. He then spent several years teaching English in France, there developing a love of the country’s musical chansonnier tradition, in particular leading practitioners such as Georges Brassens, Jacques Brel and Charles Trenet. When he came back to the UK to teach at the Intake School in Leeds, Thackray would serenade his pupils with songs he’d written on his nylon string guitar in a self-taught playing style informed by Django Reinhardt. His songs were of a very distinctive stamp: sharp, detailed and drily funny, they presented working class West Yorkshire as seen through the prism of the French song writing tradition he knew and loved.

By the age of 30 he’d graduated from playing to friends to becoming a fixture on the folk club circuit alongside contemporaries such as Ralph McTell and Mike Harding, though he was never exactly a folk singer. He’d released his first album, The Last Will and Testament of Jake Thackray, for EMI, early sessions for which took place at Abbey Road in early 1967 while the Beatles were recording Sgt Pepper in an adjoining studio. Thackray’s original songs, written for intimate solo performance, had been fitted with orchestral arrangements that didn’t always suit. This, though, was the heyday of ornate ‘baroque pop’. By way of example, the same period saw the release of Scott Walker’s first solo album, resplendent with strings and brass and containing covers of Jacques Brel songs freshly translated from the French. Thackray’s style was positively à la mode. 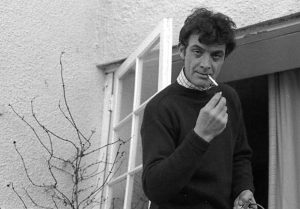 That first album was bookended by two genuine Thackray classics: the opener, Lah-Di-Dah, is surely one of the most unvarnished love songs ever written, detailing exactly what a bridegroom’s prepared to put up with for his bride: “I’ll force a laugh / for the flicking photographs / so have no fear, I won’t turn tail / I won’t run amuck when the females chuck / confetti in my ears / and cross me heart, love / I’ll keep off the pale ale.” The closing song, The Last Will and Testament of Jake Thackray itself, is a similarly clear-eyed look at death: “I want no great wet weepings / no tearing of hair, no wringing of hands / No sighs, no lack-a-days / no woe-is-me’s and none of your sad adieus / Go, go, go and get the priest and then / go get the booze, boys”.

One listener struck by Thackray’s burgeoning talent was Esther Rantzen, then a researcher and presenter on BBC‘s TV consumer affairs show Braden’s Week. Thackray had made a few small TV appearances already, but he went on to become a Braden’s Week regular, delivering written-to-order topical songs on the guitar. He continued to do so when Braden’s Week ended and Rantzen was given her own show, That’s Life, created in its image. 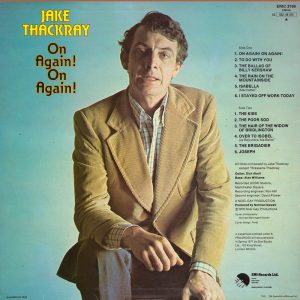 Thackray was a striking performer, tall and lugubrious with fine features, heavily-lidded eyes and a strongly-accented baritone singing voice. In that respect he was a natural TV personality, even acting as a roving reporter in his own ITV show, Jake’s Scene. His touring and recording schedule was rolling along very nicely at the time, too. He’d moved away from Yorkshire to settled with his family in the South Wales town of Monmouth, and a personal career highlight came in October 1973 when his hero musical Georges Brassens was persuaded to play the only show of his life outside France, on the opening night of Cardiff’s Sherman Theatre with Thackray as his support act.

By the mid-70s, though, Thackray’s career began to stall. Partly, it was down to fashion. Everything that had made his music so voguish in the late 60s, now made it seem dated. His TV ubiquity may have dinted any chance of serious credibility, but that too dried up and he made his last album of original songs in 1977. Effectively, then, he was only active as a songwriter and recording artist during his 30s.

In Monmouth, Thackray carved out a quiet life of going to church and drinking with pals in the local pub. Those who knew him speak of a rather lonely, diffident, self-critical man who was uncomfortable being praised for his work. He’d concluded that “the only place for a singer is not in a [recording] studio and not in front of TV cameras: it’s in front of people, it’s in front of the punters”. Even that began to elude him. He began to lose confidence and would make up any excuse to cancel a live gig. He started to drink heavily, and his health and his finances suffered badly. The support of devoted admirers had just about begun to turn his fortunes around when he died of heart failure on Christmas Eve 2002 at the age of only 64. 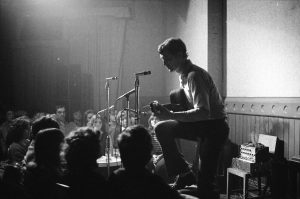 Today a whole swathe of well-known connoisseurs are Thackray fans: singers from Jarvis Cocker, Morrissey and Alex Turner to Thea Gilmore and Mik Artistik, and writers from Ian McMillan, Roger McGough and Alan Plater to Stuart Maconie and Neil Gaiman. Sure enough, Thackray’s songs remain glorious. Some blaze with beautifully-judged observational humour, such as The Kirkstall Road Girl, Jumble Sale, Sister Josephine and The Castleford Ladies’ Magic Circle. More serious, but no less brilliant, are Go Little Swale, Country Boy, Old Molly Metcalfe and The Rain on the Mountainside, portraits of rural Yorkshire as vivid as anything created on canvas. The latter boasts such wonderfully evocative lines as: “The north countryside is patiently waiting again / Blackbird is dumb in the juniper / Lapwing shivers in the dripping thicket / Down in the stone-faced town, one door opens.”

Some of Thackray’s songs, it must be said, dabble with dated misogyny, most famously On Again! On Again!, which begins “I love a good bum on a woman / It makes my day” and goes on to lament “the tongue on a woman” which never ceases from inane chatter – though that’s not to say that the song represents Thackray himself rather than the assumed point of view of a character. To be entirely fair, other songs such as The Bull, The Prisoner and The Brigadier simmer with anger at social injustice. 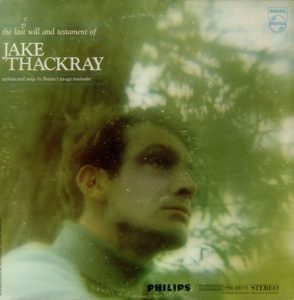 There are some intriguing parallels between Thackray and Nick Drake. Drake was ten years his junior, but both developed a unique, impressive, folk-inflected guitar style after a period living in France and both were private men who seemed uncomfortable in the public gaze, eventually fading from it. Drake is regarded as a doomed romantic figure, a great talent lost too young, and though his story was extreme and tragic, there’s perhaps something of that about Thackray too. Sadly, we’ll never know quite where his gifts might have taken him in later life, but nevertheless his achievements were mighty and richly deserve to be celebrated and enjoyed.

So, go get the booze, boys, and raise a fond toast to Jake.