Still Ill: there is a light that never goes out

Cathy Crabb November 21, 2014 Arts, Theatre Comments Off on Still Ill: there is a light that never goes out 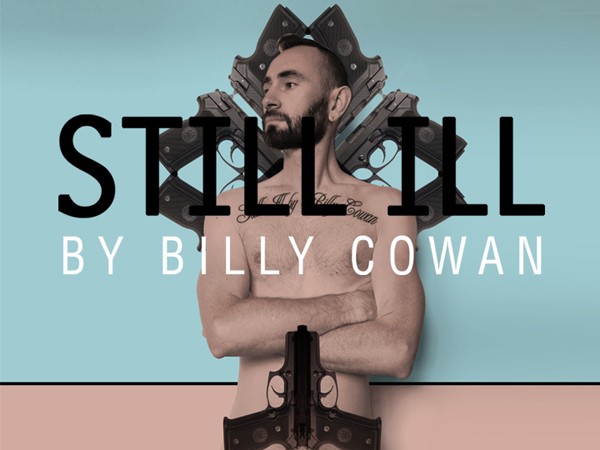 From Carol Ann Duffy to Karl Marx, Manchester as a muse has lit many a spark in the light bulb of big ideas, and many a sparkle on the great British bauble of words, pictures and music.

George Orwell in The Road to Wigan Pier said of Manchester that it was “the belly and guts of the nation”. Playwright Billy Cowan agreed as he embarked on his new play Still Ill which is inspired by Manchester and The Smiths.

Cowan is over the moon at the minute. After a nail-biting few months, he was finally given permission by Morrissey and Johnny Marr to use There Is A Light That Never Goes Out in his new play.

For a Smiths’ fan that is a major deal, but for this playwright much more. It’s a seal of approval from people he admires, and it means that a play born of his love of The Smiths can be realised exactly. He is excitable at the best of times but now he is like a firework – whizzing and whirring and kapow-ing all over the place. Cowan is passionate about his work and very serious about it too. There are no half measures with him, and I imagine he wouldn’t have continued with the production if he hadn’t got the rights.

Still Ill is a story of gay paramilitaries (who share a love for The Smiths) and a serious look at Ulster a decade after the Good Friday Agreement. Debate about gay rights and attitudes to homosexuality and The Troubles have featured in his work before, and juxtaposing these struggles is something that has been intrinsic in Cowan’s own world.

“I suppose the reason I’m not based in Northern Ireland is because of The Troubles and being gay. I left at a very young age in the 80s and found a more tolerant society over here which I liked. Although Ireland has changed a lot since those awful days of The Troubles.”

So, Cowan gravitated towards Manchester. “I spent a summer living in Chorlton in 1996 and fell in love with the place. This wasn’t surprising though as a lot of my favourite writers and musicians were from the North. The Smiths were my favourite band and I also loved Shelagh Delaney, Caroline Aherne, Mike Leigh. My sensibility seems to be a very Mancunian one. Manchester is now the place I’ve lived the longest since leaving Ireland at 17.”

Cowan premiered his first play in Manchester – Smilin’ Through –  at Contact Theatre. He feels that the similarities of Northern Irish/Mancunian humour and sensibility are coupled with his love of the wit and mettle of his Coronation Street idols.

“I find that the Mancunian sense of humour is very similar to Northern Irish, so I’ve always felt at home – plus I used to be a massive fan of Coronation Street. Being gay I obviously loved all the big female characters from the Street – from Bet Lynch and Vera and Hilda to Raquel.”

I have always admired Cowan’s belief in his own work. If I get some humble mumble from a writer about their next play, I am not likely to go and see it. If someone tells me they are excited about it – if I see them jumping out of their skin because they were allowed to use a song that absolutely HAD to be in there or the whole thing wouldn’t work – then I need to see what that is all about. Cowan works hard on his plays, strives to be engaging and entertaining and always puts the audience at the forefront of his mind. He feels he owes it to the city. “Manchester has been extremely lucky for me and I feel like an adopted son.”

Still Ill is on tour: www.truantcompany.co.uk